Flinders Island is steeped in Aboriginal history and none greater than Wybalenna Chapel. It is the oldest building on the island and has an indigenous graveyard only metres from the chapel. It was here that the Aboriginal Tasmanians were re-settled after being rounded up across mainland Tasmania in the 1830s.

The graveyard contains unmarked aboriginal graves along with graves of some of the first European settlers. This place is a must for history lovers.

In 1834 one hundred and thirty five Tasmanian Aboriginals from the mainland were settled on Flinders Island, where as George Augustus Robinson said they were to be 'civilised and christianised���. The settlement was called Wybalenna which means 'black man's houses'. They were forbidden to practise the old ways and were homesick for their lost country. Many died of respiratory disease, poor food and despair. 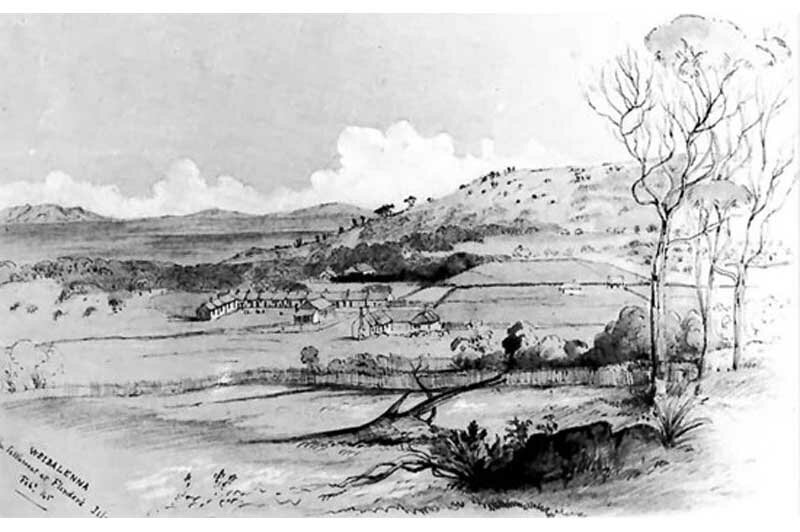 In October 1847 the forty seven survivors of this group were transferred to Oyster Cove, near Hobart. It was springtime, but even the warmer weather did not hide the fact that the former convict station was built in a cold, damp and depressing place. Their houses were little better than slab huts, and in poor repair.

For some, this move was a return to land familiar to them from childhood. Truganini was of the Nuenonne tribe whose country had been Bruny Island and the Channel area of the mainland. Truganini could have stayed in the straits and lived with Lucy Beadon on Badger Island but she chose to return to her country and stay with her companions from Wybalenna.

For many years the chapel was used as a shearing shed until, in 1973, it was purchased and restored by the Flinders Island Branch of the National Trust. Bricks were salvaged from other nearby ruins and similar bricks were brought from Tasmania. While most of the rafters of the restored chapel are original the roof needed new shingles. In the absence of historical records, windows typical of the period were installed.

In the nearby cemetery, the Young Farmers' club has erected a plaque to commemorate the death of over 100 Aborigines at Wybalenna. Manalargena, last chief of the Ben Lomond Tribe, is remembered on an 1835 headstone. A highly respected chief and warrior, Manalargena had been captured by George Augustus Robinson and accompanied him as one of the "friendly natives" on Robinson's recruiting mission through wilderness areas of Tasmania. Graves of the local Indigenous people, outside the fence and unidentified, are said to be empty. Some remains were stolen and sold to European medical and scientific institutions where they brought good prices. Some were said to have been smuggled out in bales of wool. Others were taken secretly by their own people and buried elsewhere.

Little trace of the settlement remains apart from the chapel, cemetery, low piles of broken bricks and the spreading patches of blue and white iris among the grass - a lovely sight in early October. Some archaeological exploration has taken place. The area provides a unique combination of relics and artifacts from Aborigines and early nineteenth-century military personnel. An area of 126 hectares has been gazetted as an Historic Site. Under the control of the Aboriginal Community. Wybalenna was returned to the Tasmanian Aboriginal Community, Today Wybalenna is once again Aboriginal Land.