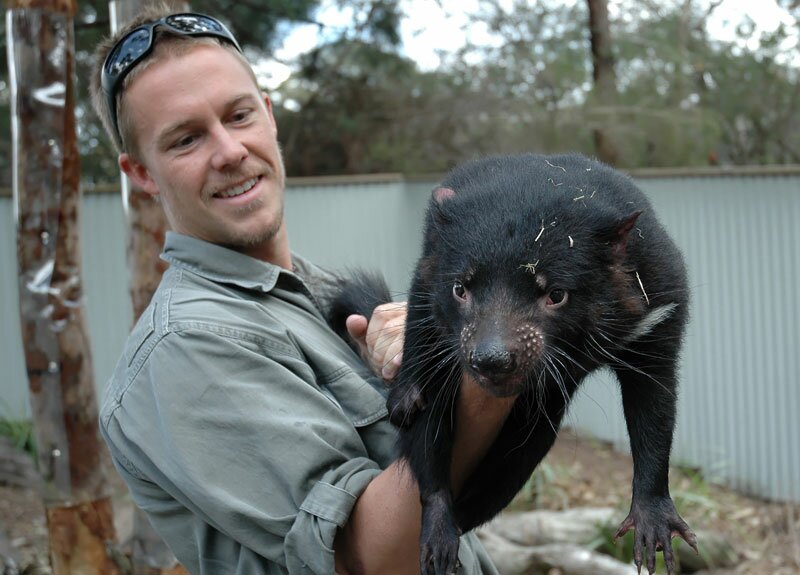 Tasmania Zoo is situated in the foothills of the Tamar Valley, about eighteen kilometres from Launceston. The Zoo is on about 360 hectares of native bushland and is home to over fifty species of native and exotic animals, including the Devils Heaven Tasmanian devil facility.

A highlight of the park is the Tasmanian Devils at Devils Heaven. You can see the devils feeding at 10:30 am, 1 pm and 3:30 pm followed by the opportunity to pat of one of the young devils. Devils Heaven is home to a growing colony of Tasmanian Devils, with about thirty animals. The colony at Devils Heaven started with six orphaned devils whose mothers died from the deadly Devil Facial Tumour Disease (DFTD), an aggressive transmissible cancer that has caused the death of Tasmanian Devils in eastern parts of Tasmania. At the time it was unknown whether the young carried the disease, but the young devils survived with no sign of the disease. The animals remain disease free, and now three generations later there has been no occurrence of the disease in the colony. It is now established that mothers do not pass on DFTD to their young.

Night tours round the Park are available. Your tour starts with a barbecue meal including hamburgers, sausages, steak, chops and salad. You then head out on a Safari Bus to see the nocturnal animals. You might see Wombats, Wallabies, Possums, Quolls, and maybe a Tasmanian devil.

Facilities at the park include a reception centre, a cafeteria with balcony overlooking the wildlife park and the fishing lakes in the distance. Snacks and drinks are available, as well as a range of gifts and souvenirs. Barbecues are available in the zoo for your use, without additional charge.

Tasmania Zoo is open every day (except Christmas Day and Good Friday) .from 8:30am to 5:30pm during daylight saving, and from 9am to 4:30pm in winter.
Open daily: 9 am to 5pm