If you think Cape Portland is remote, Swan Island is even more so. The island is a nature reserve with deserted pristine beaches and clear blue waters. If you like to swim, snorkel, fish, walk, watch seabirds and visit penguin and shearwater rookeries away from the rest of the world, this is the place to do it. Limited accommodation is available at the lighthouse keeper’s cottage.

Swan Island is off Cape Portland opposite Musselroe Ray. A granite island, with an area of 239 ha., it is part of the Waterhouse Island Group, lying close to the north-eastern coast of Tasmania.

Part of the island is privately owned and it contains an automated lighthouse, several houses and an airstrip. It has previously been subject to grazing by livestock. Several shipwrecks have been recorded here of vessels passing through Banks Strait; Brenda (1832), Mystery (1850), Union (1852).

Cape portland is the north eastern tip of Tasmania. Pointing west across Ringarooma Bay, it was named after the Duke of Portland by Matthew Flinders during his 1798 circumnavigation of the island in the sloop Norfolk with George Bass. It is an important bird breeding area for the Cape Barren Goose, Chestnut Teal and the threatened Hooded Plover. There is a small fishing community at Cape Portland.

The clean, white sand of Musselroe Bay on the east side of Cape Portland, is a popular spot for beach fishing and swimming. Situated within Mount William National Park, it is also known as a place to experience close encounters with Forester kangaroos and other Tasmanian wildlife in their natural environment. 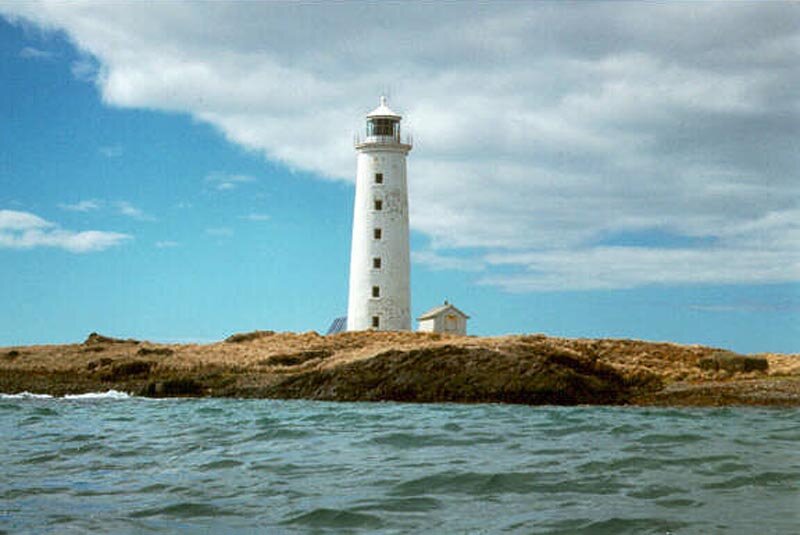 Swan Island lighthouse: Built in 1845, this lighthouse was the first to be established in Bass Strait being completed before that of Goose Island which had been started earlier. It is now the oldest tower under Federal control, the previous eldest being Cape Bruny which, though built seven years earlier, has been decommissioned.

In its early days the light was tendered by convict watchmen. There was inadequate housing for them – they often sheltered in the base of the tower – discipline was difficult as the men resented the solitary life and the Headkeeper had no authority to reprimand the men. At one stage the convicts even hatched an escape plot. Another time they raided a wreck and plundered its provisions. Eventually it was agreed that employing convicts as assistants was unsatisfactory and allowances were raised to attract free men to the positions. With the construction of a new Georgian-style 4-roomed superintendents cottage in 1850, the assistants who had previously been sheltering in the base of the tower were able to shift into the original 1845 house which was also used for stores.

The new 1850 house became known as Eliza’s Cottage. It became the home of Charles Baudinet, the longest serving keeper on the island. He took over as Superintendent in March 1867 and retired 25 years later in 1891. Andy Gregory, the last keeper left in 1986. Charles’ wife, Eliza, died of dropsy mortification and is buried in the only marked grave on the island. However, two children who drowned on the island are buried on either side of the grave their wooden crosses having long since disappeared. It is also believe that there are several unmarked graves of Aboriginals forcibly resettled on the the island from the Tasmanian mainland.
The tower’s staircase is unique in that it is suspended off the central column, where all other Tasmanian lighthouse staircases are suspended off the tower wall. The lantern revolves in an anti-clockwise direction, and along with a Victorian light the two are believed to be only ones in the southern hemisphere to turn this way.