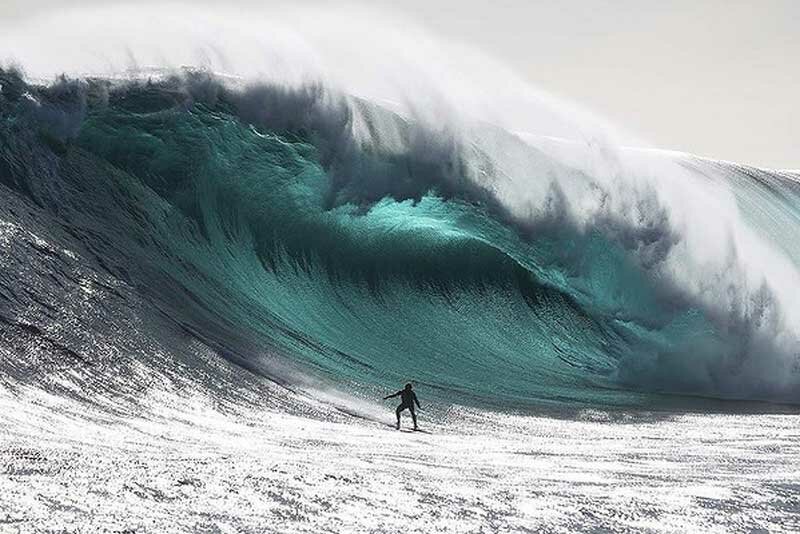 Australia is very much 'The Lucky Country' when it comes to surfing. It has the largest stretch of coastline of any island in the world, and a large portion of it is surfable. Many of the best surfing areas of Australia are accessible by road, but many aren't which makes them even better when you do find them. There's still plenty of secret spots in Australia that only a hand full of people know about, and some great breaks that are still yet unsurfed.

Because of the sheer size of Australia and the large stretches of isolated and unpopulated areas, locals hope that these untouched beaches will remain in their current pristine condition. When travelling to remote areas across untouched sand dunes and beaches, remember to try not disturb plant life or animals and please take all you're rubbish back out, including cigarette butts.

Tasmania is an often overlooked surf destination does actually get very good waves. On the west coast, only the top one third of the west coast is accessible, even then only at certain locations. The south west is totally wild and remote, no doubt there is waves and perhaps some classic reefs, but they will probably remained unsurfed for many years yet. The Northern coast of Tasmania is somewhat protected and lengthy flat spells, especially in summer can occur, however Bass Strait can be one of the roughest stretches of water around and waves large enough to surf are often generated within the strait itself. The east coast is open to the ocean and it does get good waves especially after winter lows pass into the Tasman Sea. Moving further south to the Hobart area and big waves are found in the Port Arthur area. Hobart itself is located on a large bay, but swells do sometimes work right up into it. 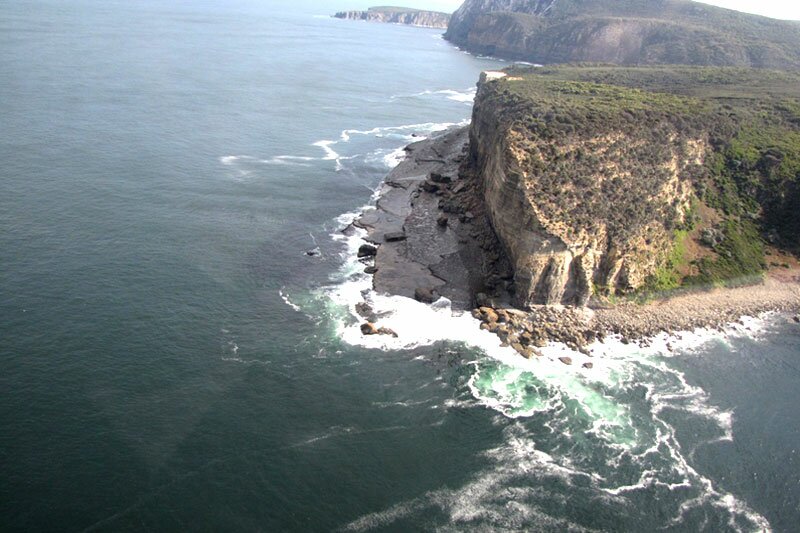 Five hundred metres past the turnoff to Port Arthur Historic Site, down a gravel road, through a pear orchard, two hours' walk along a trail flanked by scrub, down a cliff and beyond a series of truck-sized boulders, you'll find Australia's biggest waves. This rugged headland on the Tasman Peninsula is generally accepted as being the most challenging surfing location in Australia. Below the bluff, heaving swells hit a reef head-on, causing a huge body of water to arc up seemingly out of nowhere. In recent years, this churning swell has attracted elite surfers from around the world, dominated the surf media and set the bar for extreme surfing in Australia. 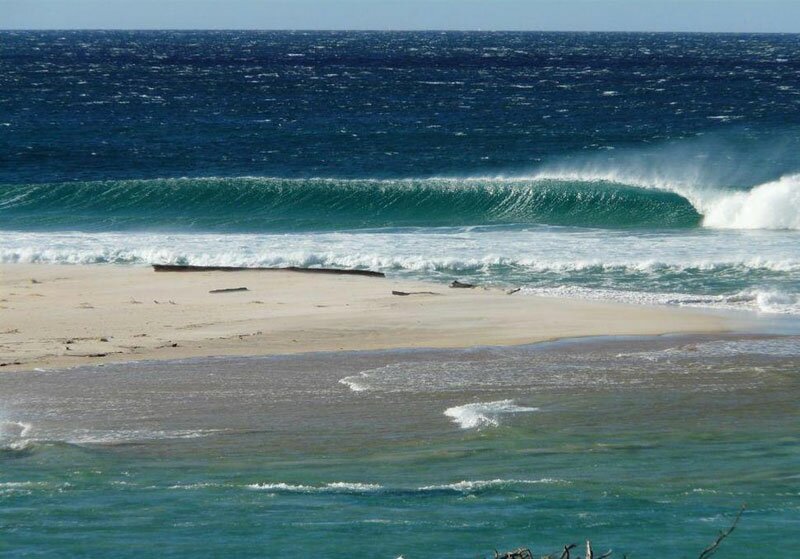 Scamander is perhaps the most well known surfing spot on what Tasmanians call their surf coast. Here there are kilometres of long white beaches where the surf rolls in reliably. Accommodation is mainly in self catering holiday houses with some excellent free camping, caravan/cabin parks, motels, a resort at Ironhouse Point (Falmouth) and large hotel at Scamander. You can surf all year round here, the climate is mild even in winter. Scamander, Seymour, Chain of Lagoons, Four Mile Creek, Falmouth, Scamander and Beaumaris are the major hot spots, but surfing is popular all the way south from St Helens Point to Bicheno. 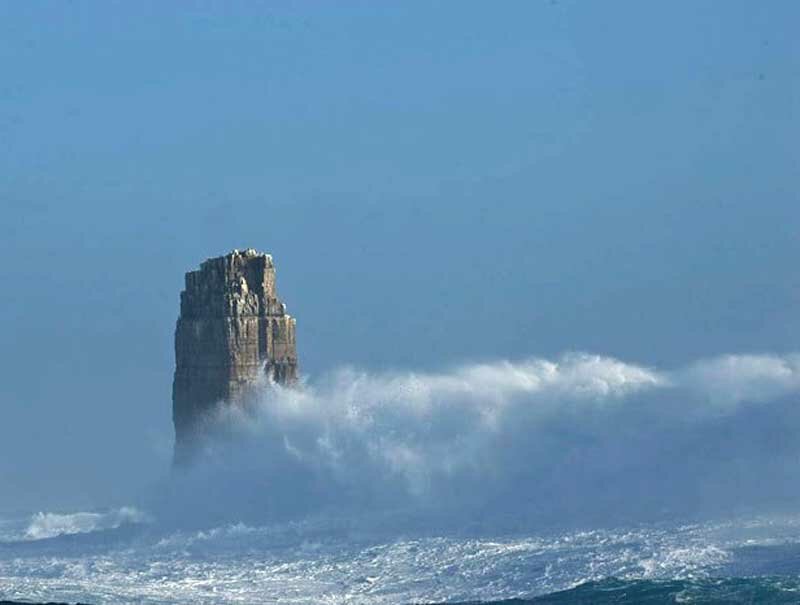 The south coast is the location of Eddistone Rock, Australia's latest big-wave surfing hot spot, having first been surfed as recently as 2008 (like Shipstern Bluff, surfers are towed on to the waves here with jet-skis). Its remote location means it is beyond the reach of all but the most dedicated visiting surfer. Surfers were shown the location by local fisherman, who have known about the legend for many years. Not be confused with the similarly named Eddystone Point off the north-east coast of Tasmania, Eddystone is a tower-shaped rock or small island, 30 m high and 27 km from South East Cape. The island was described by Abel Tasman in 1642 as "a tall, obtuse, square tower". Pedra Branca, a 2.5 ha rock or small island, is 2.2 km to the west. 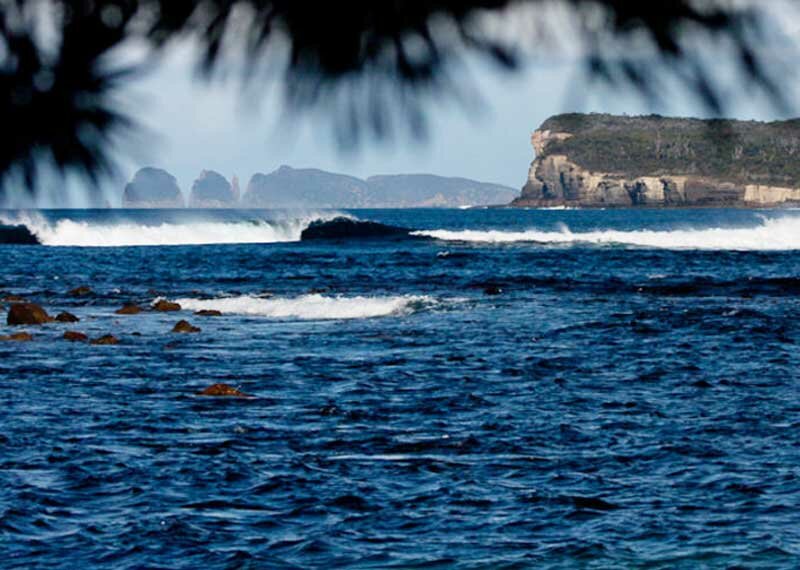 If you are in Tasmania's south and find Shipsterns Bluff way too daunting and a little hard to get to, there are plenty of other surfing spots in the vicinity. Eaglehawk Neck, the isthmus joining the Forestier and Tasman peninsulas, has exceptional waves when the swell is south-easterly and the wind westerly. Though its western shores are sheltered by the D'Entrecasteaux Channel, BrunyIsland's east and south coasts bear the brunt of Antarctic swells (and water temperatures), and are obvious places to go looking for thew perfect wave. The pick of the island's southern breaks is Cloudy Bay. It's Australia's southernmost surf beach, surf it in a southerly swell and a northerly wind. Bruny Island is accessed via a 15-minute ferry crossing from Kettering, which is 40 minutes' drive south of Hobart. 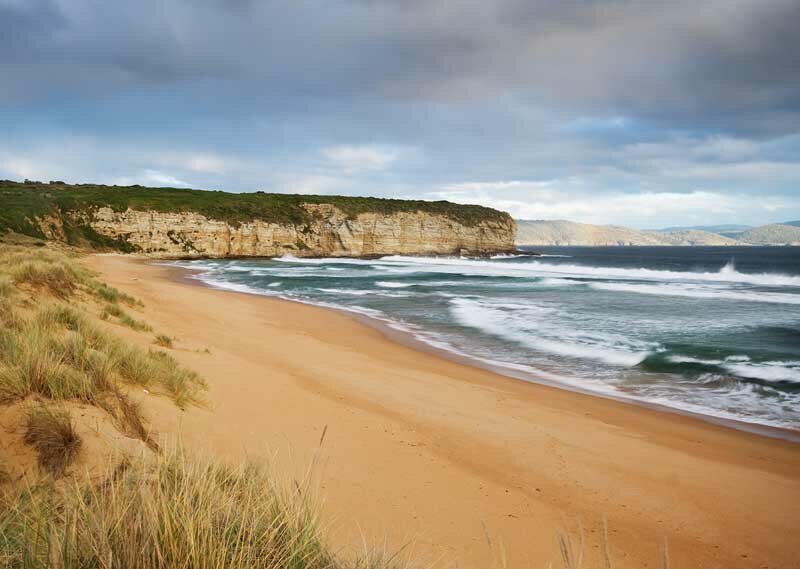 Clifton Beach is Hobart’s most popular spot, only 30min drive from the city centre. The south end is usually a bit softer where a defined right appears on moderate SE-S swells and offers some protection from W winds. Up the beach is a bit pushier and the sandbanks are flanked by deep channels to help deal with the common close-out. 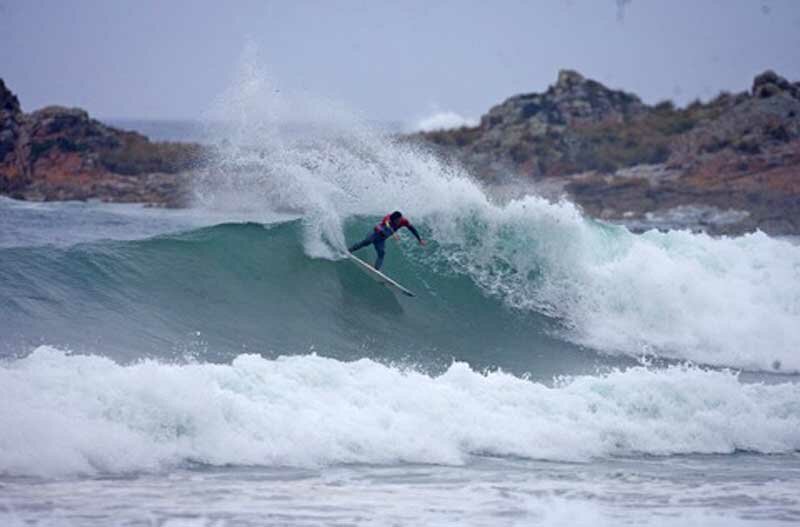 Tasmania’s westernmost community and the furthest settlement from Hobart, Marrawah is the most popular surfing spot in Tasmania’s north. Marrawah's three beaches - Ann Bay, Mawson Bay and Green Point - have hundred-metre-long rides when the swell is westerly and the wind offshore. The record wave in this area was measured at almost 20 metres with wind and surf rolling in uninterrupted for almost 17,000 kilometres.
Marrawah is the venue for the National Wave Sailing Championships; a highly sought after title worth $22,000 and held over 5-days in February that combines wind and wave skills to attract competitors and visitors. The West Coast Surf Classic, an amateur surf carnival that has been going for the past 30 years, follows this event each March long weekend and attracts up to 1000 spectators and competitors. 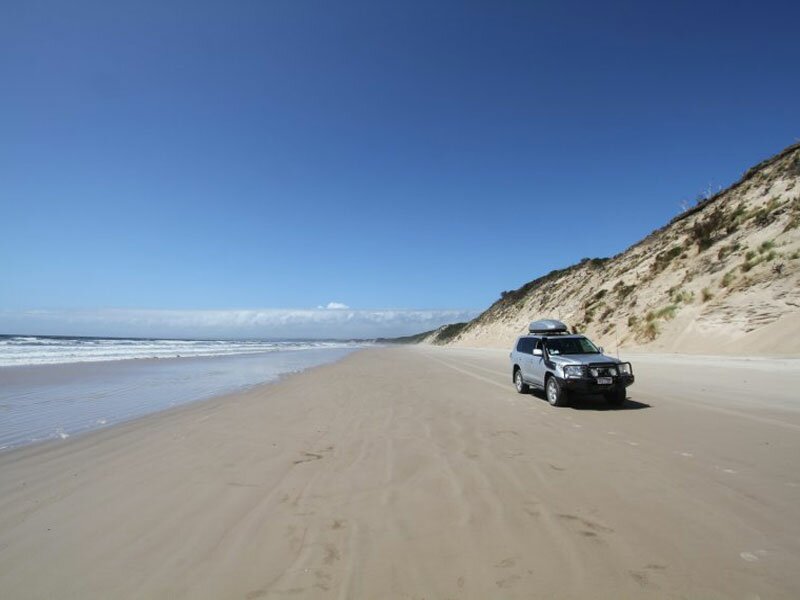 With a great selection of nearby ocean, rivers and lakes, Strahan is an ideal location for a wide range of water sports, such as surfing, kiteboarding, wind surfing and kite surfing. Ocean Beach is a popular location for these sporting activities. If you are a novice surfer, Strahan surfing schools offer surfing lessons for all ages and abilities. 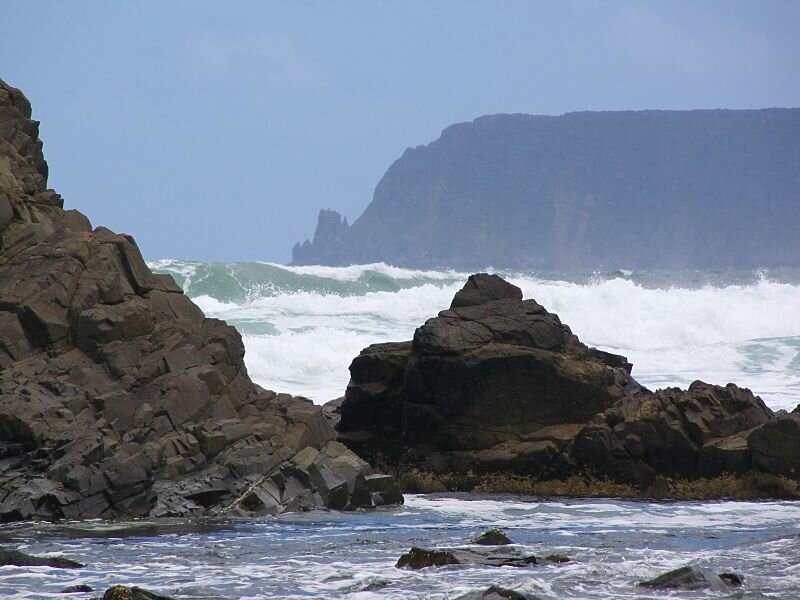 In the far south, where Tasmania's west and east coasts meet, South Cape Bay is a pristine beach break that gets huge, clean waves on a southerly swell. Surfers carry their boards along a stunning walking trail and it pays to bring a few - boards are known to snap here when the surf's up. South Cape Bay is a five-hour hike from Cockle Creek, which is a two-hour drive south-west of Hobart. 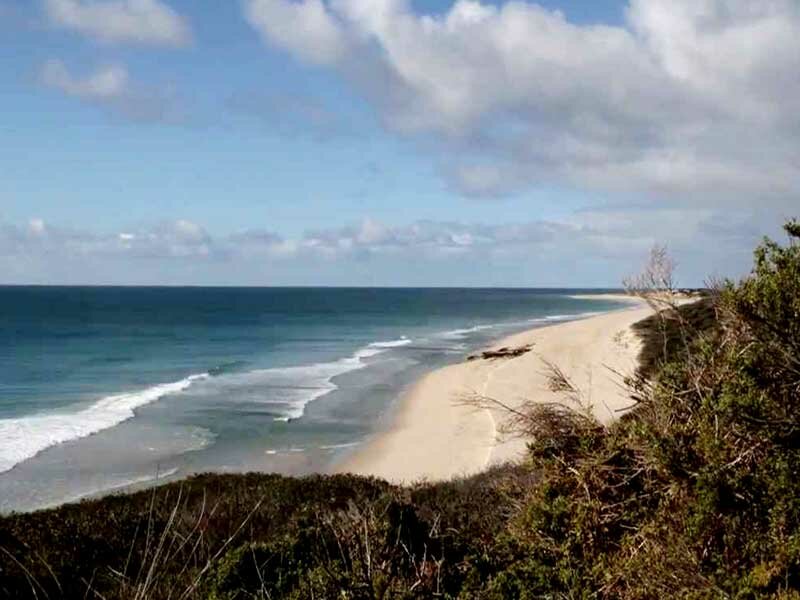 Though there are a number of good breaks at points along the north coast, such as the mouth of the Mersey River in the north-west and Tam O'Shanter in the north-east, the best surf in the north is undoubtedly found on King Island. Being in the path of the Roaring Forties, its diverse coastline means the surf's always up somewhere. Martha Lavinia Beach, on King Island's east coast, is ranked by Tracks magazine as Australia's best beach break. On the island's west coast, British Admiral beach enjoys an easterly wind and westerly swell, as does Fitzmaurice Bay in the south-west, where at low tide adventurous cows wade into the surf to eat nutritious bull kelp.