The Entrance Island and Bonnet Island lighthouses stand at the entrance to Macquarie Harbour, a huge inland sea on Tasmania’s west coast. The Entrance Island light, one of the most photographed lighthouses in Tasmania, guards the notoriously shallow and dangerous 120 metre wide channel entrance to the harbour, known as Hell’s Gate. The name of the channel relates to the original convicts’ claim that it was their point of ‘entrance to Hell’, their Hell being the Macquarie Harbour Penal Station on Sarah Island and the outlying surrounds of the harbour.
The narrow 120 metre entrance to the huge Macquarie Harbour was discovered in 1815. Within a year, timber cutters moved in and navigating the narrow entrance and its sandbar was an essential hazard to getting the timber out to Hobart. A signal station was erected near Cape Sorell in 1822 to indicates conditions entering the harbour. It was manned by convicts from the newly established penal settlement at Sarah Island. 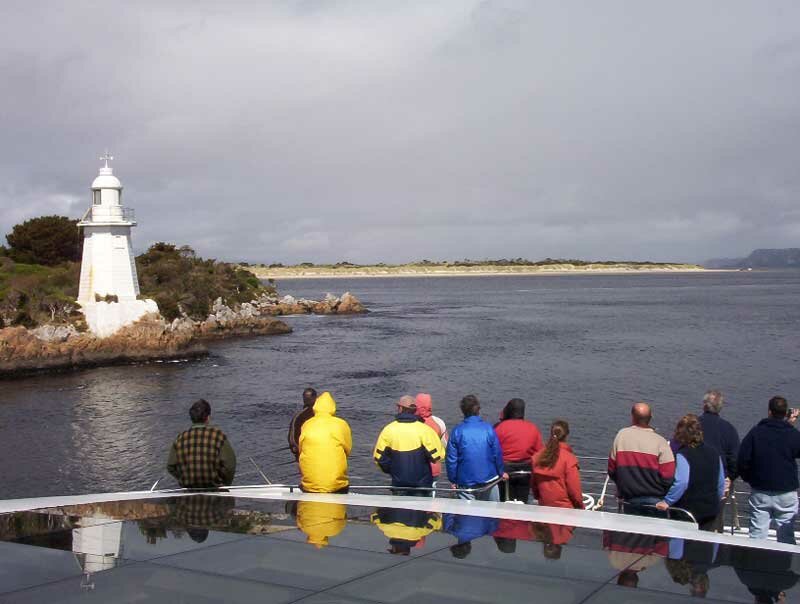 The conditions were so bad at the new Sarah Island that the convicts named the entrance to the harbour Hells Gate. Other records indicate the name was used due to the enormous rush of the tides through the entrance to the harbour which can create very dangerous conditions. In the 1890s the discovery of silver and lead at Zeehan greatly increased the traffic entering the harbour. Works taken to improve the entrance included the building of a breakwater and the lighthouses.
The lighthouses can be reached by boat from the port of Strahan. There are regular tours of Macquarie Harbour that include the lights.Hells Gate