Small town now a commuter belt settlement. Snug is another small town on the D'Entrecasteaux Channel which has attracted city dwellers and people interested in alternative lifestyles. Once a centre for fruit growing and timber cutting it has become urbanised in the last few decades.

The major attraction in Snug is the Channel Folk Museum at 648 Channel Highway. It was opened in 1979 and has subsequently been ungraded. Apart from an extensive collection of old photographs and records the museum includes displays detailing the history of the Electrona carbide works, the local scallop industry, and the timber industry. There are interesting displays of farm, domestic and blacksmith's tools as well as a carefully recreated country kitchen. 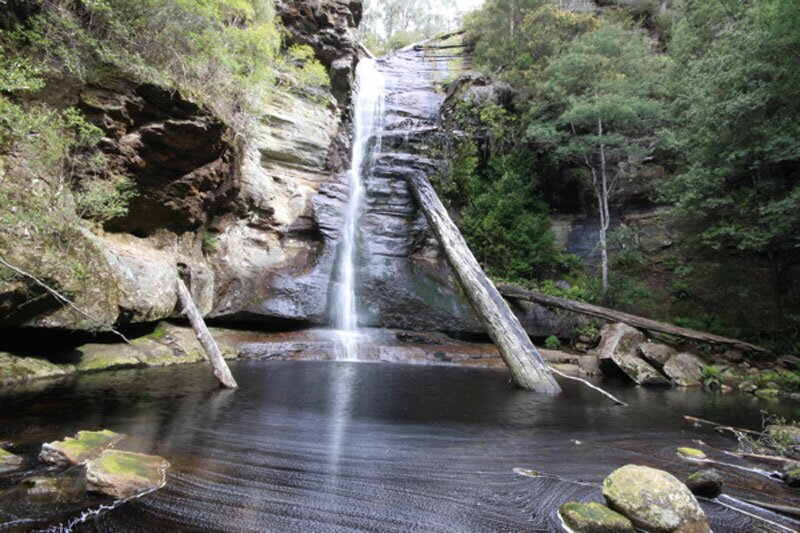 A pretty 25-30m high waterfall, accessed via a walking track. Allow an hour for the return walk to the falls. Follow Snug Tiers Road, after turning off at the Snug School on the Channel Highway, and turn left into Snug Falls Road. Take care as this mostly gravel road is quite narrow in parts but frequent lay bys provide space for passing vehicles.

The car park is well signed and the walk begins 150 metres further along the road. The track descends down to the falls and is initially firm gravel with some exposed rocks and roots. Further down, the track can be slippery underfoot when wet.

The walk takes you through dry sclerophyll forest and about half way is a small shelter and seat. Further down into the gully the vegetation is more like rainforest with with ferns and mosses covering rocky outcrops and small caves.

The 20 metre falls can be spectacular after rain. Most of our canine friends appreciate a dip in the cool waters of the pool at the base of the falls. Be careful over the rocks as they can be slippery.
Location: off Snug Tiers Rd, Snug

Snug is 30 km south of Hobart on the Channel Highway between Kingston and Kettering,

Snug, like all the places along the D'Entrecasteaux Channel, was first sighted by Europeans in 1792 when Rear Admiral Bruni D'Entrecasteaux sailed up the channel. Subsequent visitors included Bass and Flinders and Lieutenant John Hayes.

The establishment of the colony at Hobart Town led to explorations of the Channel coast and around 1810 the Snug River was discovered and named because of its quiet and 'snug' surroundings.

In the 1820s North West Bay, on which both Snug and Electrona are located, was being used as a port and a saw milling location.

The area around Snug was first settled in the 1830s and 1840s when timber cutters moved in and settlers took up land. The settlers cleared land and used it either for mixed farming or for orchards where they grew apples and berries. The rugged terrain between Snug and Hobart ensured that, like so many of the towns in the D'Entrecasteaux Channel, Snug was regularly visited by ketches and barges which traded along the coast.

Some time during the 1840s and 1850s a small settlement grew up at Snug. There is little evidence of its origins. All that can be said is that in 1854 a Captain Butler-Stoney wrote of the area: 'About two miles from the river we cross a small, clear brook called 'the Snug River', which discharges its scanty stream into an inlet, whose quiet and agreeable seclusion has given a name not only to the little stream, but also to the neighbouring countryside. A short distance from here are the remains of an excellent edifice, built originally by Mr Tomkins, but which the desolating bush fires of January 1854, utterly destroyed, excepting the mere brick walls. At that time it was used as an hotel.'

It seems that Snug has been particularly vulnerable to bushfires. The bushfires which ravaged southern Tasmania in February 1967 wreaked havoc on Snug. Eleven people in the town died and in the Kingborough municipality 303 houses, 96 cottages and shacks, 9 factories, 12 shops, 13 churches and halls were destroyed. In Snug itself 80 of the town's 120 houses were destroyed as well as two churches, two shops and more than half of the local school.