Ideally situated just 1.6 kilometres south of Freycinet Peninsula, Schouten Island is an isolated paradise which is fantastic for snorkelling, canoeing and camping. Part of Freycinet National Park, the island is approximately 6 kilometres wide by 7 kilometres long and is bounded by a picturesque coastline of small sandy beaches and rocky granite bays.

Though the island is popular with campers and kayakers, there is no settlement and no ferry service, which adds to the feeling of remoteness and being in a place where it is just you and nature. Walking tracks give access to the many parts of the island. There are huts near a caretakers' residence at Moreys Bay. Camping is permitted at nearby Crocketts Bay. Tours visit the island's shore, and boats can be chartered from Coles Bay to gain access. The island is a 30-minute boat trip from the township of Coles Bay. 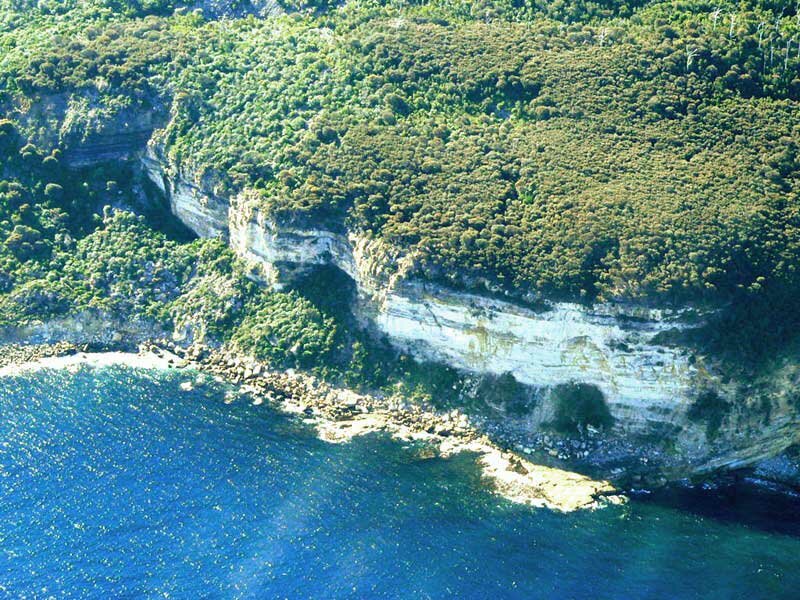 Schouten is a rugged island with the highest point, Mount Storey (400 metres). Mt. Daedalus is the summit peak of a substantial granite area on the island and small tin workings can be seen in the vicinity. The island is surrounded by cliffs, broken by sheltered bays. A north-south fault line divides the island where the eastern part of the island is composed of granite while the western part is dolerite overlying sedimentary and supergroup rocks.

The natural vegetation of the island is dominated by eucalypt forest on the dolerite soils in the west, and by scrubland, heathland and sedgeland communities on the granitic soils of the east. Areas associated with previous human disturbance, such as clearing, grazing and frequent burning, are dominated by grasses and herbs.

Little Penguins and Short-tailed Shearwaters breed on the island, along with other bird species such as the Tasmanian Native-hen. Australian Fur Seals haul out on the eastern side. Reptiles present include the Tasmanian Tree Skink, She-oak Skink, Southern Grass Skink and Three-lined Skink

Freycinet National Park, to the immediate north of Schouten Ialand, is about 2 1/2 to 3 hours from either Hobart or Launceston. Turn off the Tasman Highway (A3) onto the Coles Bay Road (C302) 12 km south of Bicheno. (The turnoff to the Friendly Beaches section of the park is via a gravel road about 2 km after leaving the highway). The main park entrance and visitor reception are just after Coles Bay township about 30km from the highway on a good quality sealed road.

On navigating the east coast of Tasmania in December 1642, Abel Tasman named Schouten Island (it appeared as Schouten's Isle on an 1826 map) after Joost Schouten, a member of the Council of the Dutch East India Company, who was the first Dutch commander to round Cape Horn, in 1610.

The adjacent peninsula was initially thought to consist of a chain of islands, but this myth was dispelled during the visit of Nicholas Baudin, the French explorer, in 1802-03: "High granitic mountains whose summits are almost completely barren, form the whole eastern coast of this part of Van Diemen's Land. They rise sheer from the base. The country which adjoins them is extremely low and cannot be seen unless viewed from only a little distance at sea. It is to this strange formation that we must doubtless attribute the errors of the navigators who had preceded us into these waters and who had mistaken these high mountains for as many separate island." The brothers Freycinet were senior officers on Baudin's expedition, although it is unclear which one the peninsula was named after.

Members of the Baudin expedition landed on Schouten in 1802. In the early 19th century, sealers were active in the area and are known to have visited the island. The discovery of coal on the island in 1809 by a sealer, John Stacey led to several phases of coal and tin mining, where in 1880 a small number of Chinese men worked the ground for tin. Stacey found that 200-300 hectares of land could be suitable for cultivation. Plans to use convict labour to mine coal on the island in the 1840s were never realised.

From 1850 Schouten was used for grazing sheep, with grazing leases only expiring in 1969. Schouten Island, which had been administered as a scenic reserve from 1916 to 1941, and then again from 1967, was added to Freycinet National Park in 1977.