The Penal Settlement at Macquarie Harbour was known in its time as an ‘Earthly Hell’, as it was located far away from any of the settled areas, and surrounded by forest on the west coast of Tasmania.
The ruins of the settlement remain today as the Sarah Island Historic Site —part of the larger Tasmanian Wilderness World Heritage Area—though they are not as well preserved as those at better-known Port Arthur. The island is accessible via ferries, cruises and charter boats operating out of the town of Strahan.
The settlement housed mainly male convicts, with a small number of women. During its 11 years of operation, the penal colony achieved a reputation as one of the harshest penal settlements in the Australian colonies.The labour on which most of the 1,150 convicts were employed was exhausting (from dawn until dusk, six days a week), and use of the lash was frequent.
Convicts stationed here lived upon Sarah and Grummet Islands, and worked around the harbour and up the Gordon River from 1822-1833. The main settlement was located on Sarah Island although newly arrived convicts and those sentenced to work in irons were housed in a miserable building on a detached and wind swept outcrop of rock.
The penal station was established as a place of banishment within the Australian colonies. It took the worst convicts and those who had escaped from other settlements. The isolated land was ideally suited for its purpose. It was separated from the mainland by treacherous seas, surrounded by a mountainous wilderness and was hundreds of miles away from the colony’s other settled areas.The only seaward access was through a treacherous narrow channel known as Hell’s Gates.

Strong tidal currents resulted in the deaths of many convicts before they even reached the settlement due to ships foundering in the narrow rocky channel. The surveyor who mapped Sarah Island concluded that the chances of escape were “next to impossible”. Neighbouring Grummet Island, a small island to the North west, was used for solitary confinement.
Despite its isolated location, a considerable number of convicts attempted to escape from the island. Bushranger Matthew Brady was among a party that successfully escaped to Hobart in 1824 after tying up their overseer and seizing a boat. James Goodwin was pardoned after his 1828 escape and was subsequently employed to make official surveys of the wilderness he had passed through. Sarah Island’s most infamous escapee was Alexander Pearce who managed to get away twice. On both occasions, he cannibalized his fellow escapees.
Lieutenant-Governor William Sorell wanted the new penal colony to be economically viable. It could then reimburse the British government for the expense of its establishment. Convicts were employed in the shipbuilding industry. For a short period, it was the largest shipbuilding operation in the Australian colonies. Chained convicts had the task of cutting down Huon Pine trees and rafting the logs down the river. Eventually the heavily-forested island was cleared by the convicts. A tall wall was then built along the windward side of the island to provide shelter for the shipyards from the roaring forties blowing up the harbour.
As Sarah Island could not produce food, malnutrition, dysentery, and scurvy were often rampant among the convict population. The penal colony had to be supplied by sea. Living conditions were particularly bad in the early years of the settlement. The settlement was so crowded, convicts were unable to sleep on their backs in the communal barracks. Punishment involved solitary confinement and regular floggings – 9,100 lashes were given in 1823.
In 1824 a prisoner [Trenham] killed another convict in order to be executed rather than face further imprisonment at Macquarie Harbour Penal Station.
It was finally closed in late 1833. Most of the remaining convicts were then relocated to Port Arthur.
The island was later used for pining purposes, and was known by the piners as Settlement Island, rather than Sarah Island, though it has since reverted to its original name.

Sarah Island: Named by explorer James Kelly after the wife of merchant Thomas Birch, who financed Kelly’s voyage. The island has also been known as Settlement Island. Its Aboriginal name is Langerrareroune.

Butler Island: Explored by an exploring party aboard the brig, Cyprus in 1829, the island was named after Captain James Butler, Commandant of Sarah Island, 1825-29.

Charcoal Burners Bluff: Named in reference to the charcoal burner operated by convicts from the Sarah Island penal settlement.

Grummet Island: Formerly known as Condemned or Small Island, the present name may be an allusion to the shackles of the prisoners who endured confinement on this small island. A grummet is a metal ring.

Hells Gates: Believed to have been so named by convicts who passed through this narrow and treacherous waterway on their journey to the Sarah Island penal settlement.

Soldiers Island: Named by Commissariat Officer Lempriere in 1839, presumably in reference to its popularity as a retreat for the soldiers of the Sarah Island penal settlement. 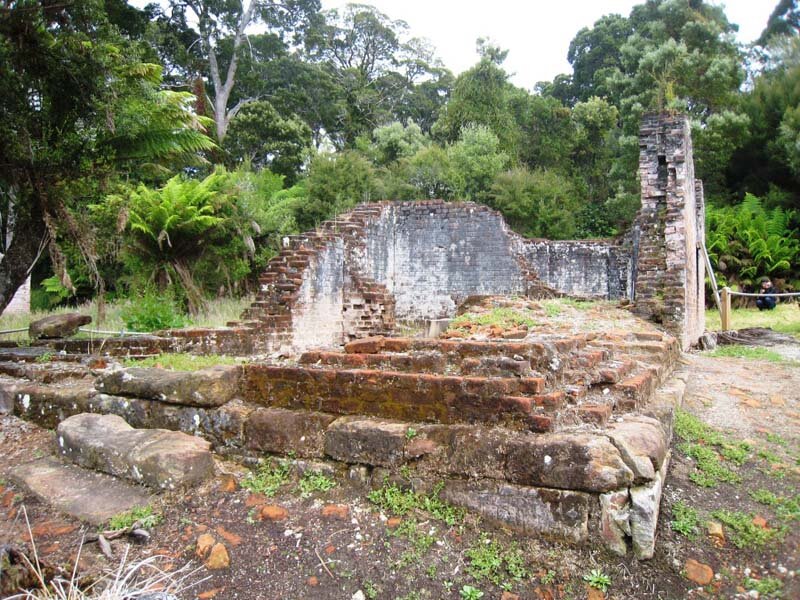