Brimming with old world charm, Richmond is one of Tasmania's most loved and visited Georgian era colonial villagers. Rich in history and heritage and contains the oldest bridge and St Johns, the earliest Roman Catholic church in Australia, as well as a perfectly preserved colonial gaol. Established in 1825 to house the gangs of convicts used as labour in the area and prisoners in transit, the Gaol has been restored and is now a major tourist attraction. It is older by five years than the buildings at Port Arthur. 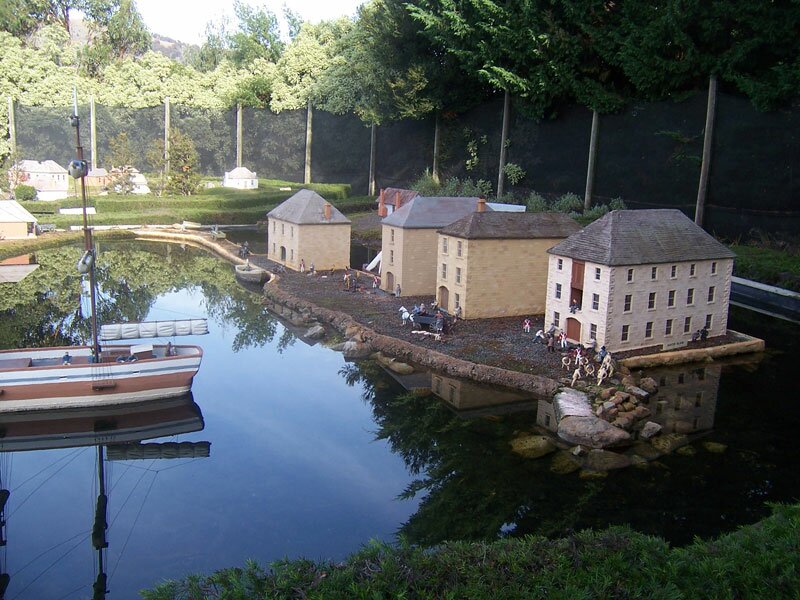 Old Hobart Town is a unique multi award winning model village depicting life in Hobart as it was in the 1820s. Individually handcrafted with passion by Andrew and John Quick over a three year period, the authentic model village has been reconstructed from original plans and it gives a unique glimpse into the tough life of Australia’s convict past. A unique attraction that is not to be missed. 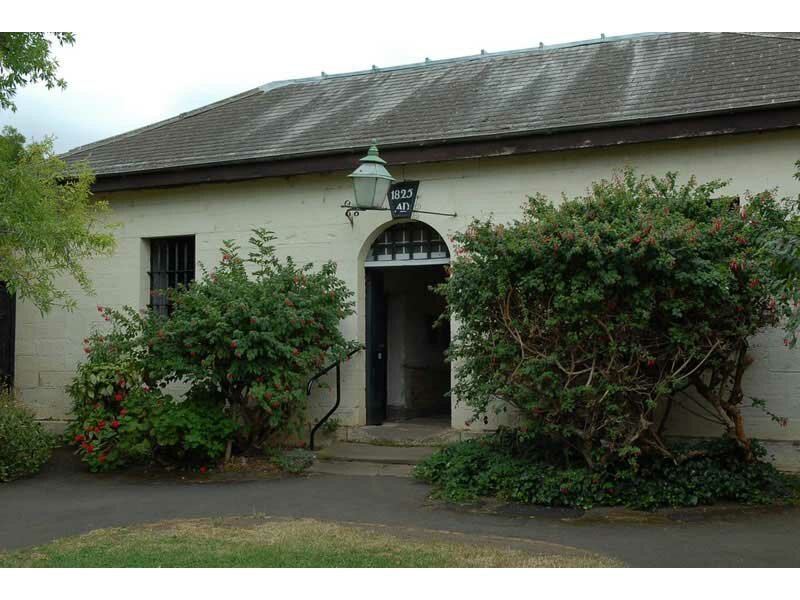 The original section of the Richmond Goal was commenced in 1825, probably to a design by Colonial Architect David Lambe. The Cookhouse, Solitary Cells and Women’s room were added in 1835 and the stone wall was built in 1840. Unhappily, the gaol building itself was not as substantial as first thought, because parts of it actually blew down during a heavy gale in 1827. 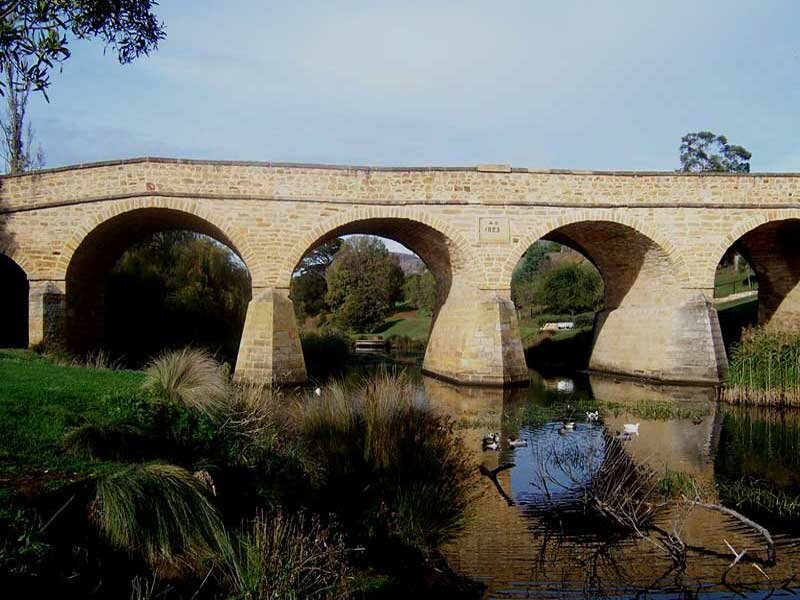 Richmond’s centerpiece is the magnificent bridge, Richmond Bridge, built between 1823 and 1825. It is the oldest bridge in Australia still in use. Situated in Richmond, Tasmania, roughly 25kms from the state capital, Hobart, the Richmond Bridge spans the Coal River in the heart of a region known for its boutique wineries, history, and beauty. The bridge was built by convict labour and like much of Tasmanian convict history, is shrouded in tales of hardship, tragedy, an restless spirits. It is said that the Richmond Bridge is haunted by the ghost of the vicious flagellator, George Grover, who was beaten to death by convict workers and thrown into the river from the bridge in March 1832. 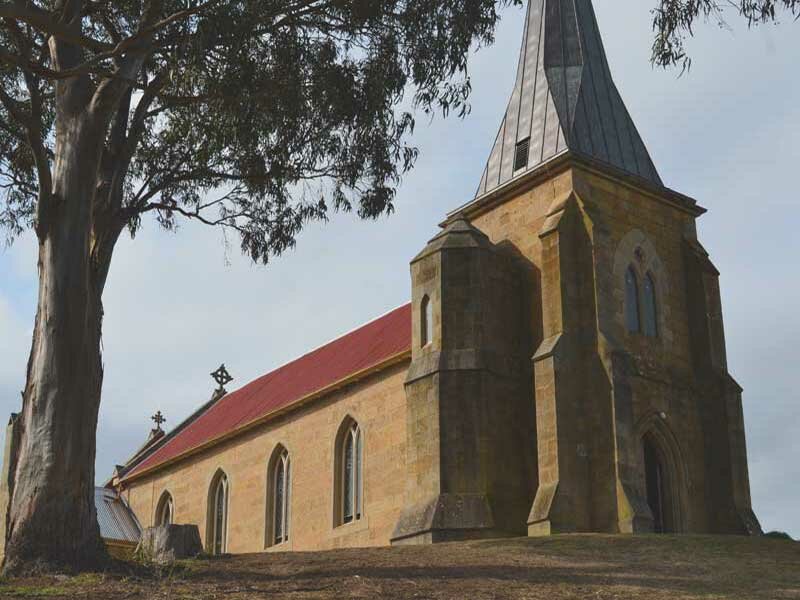 The oldest Roman Catholic church in Australia, the nave of the Gothic Revival stone church was built in 1836, and the remainder built in 1859, all to a design by ex-convict architect, Frederick Thomas. The copper sheeted spire was added in the 1900s. The square tower has an unusual square projecting stairwell tower.

Bridge Cottages: Quaint, dignified and classified by the National Trust, Bridge Cottages were built around 1823, before the Richmond Bridge, to accommodate the sergeant in charge of building the bridge and the arms store – hence the names The Sergeants Quarters and The Armoury. The buildings are now restored and decorated in character and used for visitor accommodation.

Richmond Arms: one of the youngest buildings in the town, this hotel was built in 1888 as a replacement for the Lennox Arms that burnt down in 1886. Richmond Arms is a two-storey Victorian structure with rusticated quoins and reveals, and an iron hipped roof. The hotel has a two storey verandah with twin timber columns, iron brackets, frieze and balustrade.

Old Store and Granary Group: a group of Georgian buildings, consisting of a granary, store and residence, were built around 1832 by James Buscombe. The Granary is a three-storey stone building with iron gabled roof, 12-pane windows and the original horse-operated hoist. The two storey store and residence are also built of stone, but stuccoed.

Municipal Buildings, Court House, Watch House and Hall: these stone buildings were erected after the completion of the original section of the Gaol in 1825-26. They are considered to be the work of Colonial Architect David Lambe.

Mrs. Currie’s House: A classic Georgian house, set in the heart of historic Richmond. The rear section, originally called The Prince of Wales, a public house owned by John McGowan, was built in the 1820?s and is one of the oldest rammed earth inhabited dwellings in Australia. The double storey Georgian style house was added in the 1860?s and over 80 years was the home of Mrs. Currie.

Millhouse: Built as a steam mill on the Coal River by convicts in 1853 by George Burn, the millhouse was later used as a butter factory and now a guest house. Four bricks thick at the base and with massive hand-cut eucalypt beams in the ceilings, the three-storey Georgian building is National Trust-rated building. It features hand-hewn eucalypt beams, wide-planked Tasmanian oak floors and convict bricks. It was converted into a heritage home and studio by the famous Australian painter John Eldershaw. Millhouse is one today a guest-house. 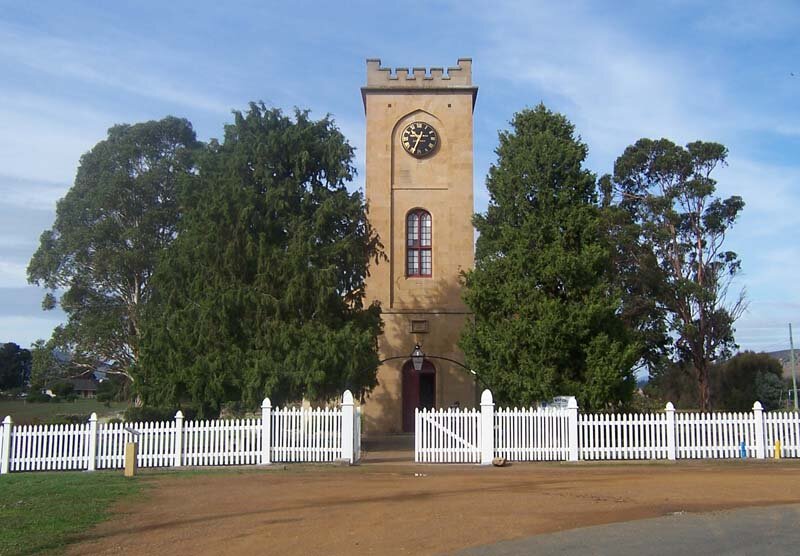 St Luke's Anglican Church (1834): The foundation stone was laid in 1834 by Governor Arthur. Designed by John Lee Archer and built by convict labour, the church was completed in 1835. James Thompson, the convict who was responsible for the original timber work inside the building, was granted his freedom as a reward for his work.

Richmond Court House: The Court House was built in 1825. In the early days, it was also used for church services. It was used as Council Chambers from 1861, when the Richmond Municipality was established, until 1993, when Richmond Council amalgamated with Clarence City Council.

Tasmania's History House is one of Richmond's oldest colonial houses and is open to visitors or for private events The house was built in 1826 by Simon McCullough an Irish convict pardoned for his role in apprehending a murderer in 1825. It was an inn for fifty years trading originally as "The Jolly Farmers Inn "and then "The Union Hotel" but has been a private residence for 188 years. 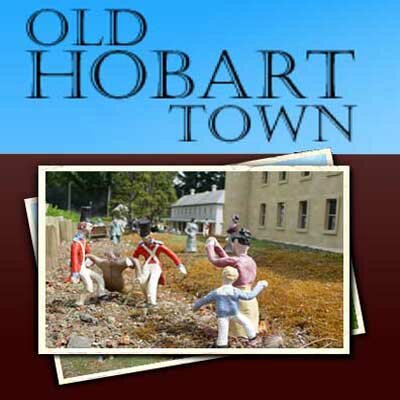 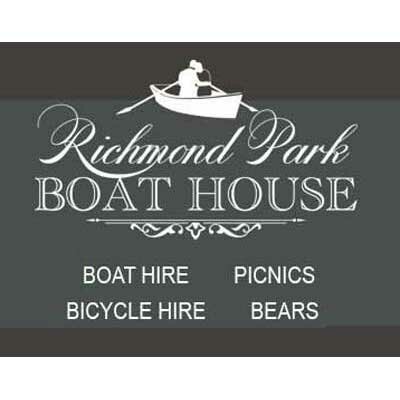 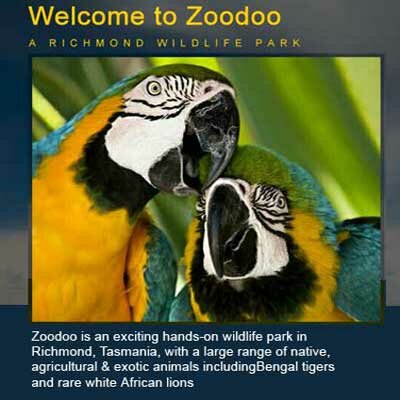