In the autumn of 1792 a pair of storm-battered French ships, their crews weatherbeaten and tired, dropped grateful anchor in waters off Tasmania’s south-east coast. The ships were Recherche, under command of expedition leader, Rear Admiral Bruni d’Entrecasteaux, and Esperance, under Commander Huon de Kermadec. The peaceful waterway was later named D’Entrecasteaux Channel and the kidney-shaped bay they chose for their rest and repair became known as Recherche Bay. 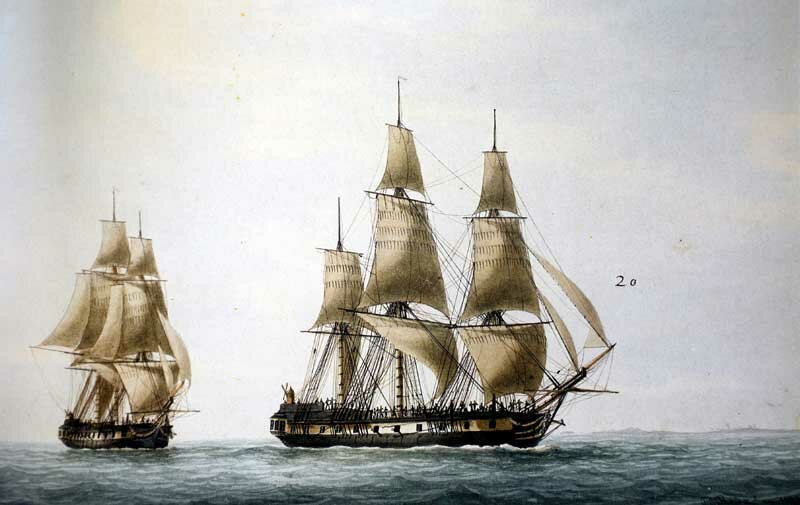 D’Entrecasteaux’s was a high profile dual-purpose expedition. His mission was to search for the lost maritime hero, La Perouse and to undertake top-level scientific research including astronomy and research into the Earth’s geomagnetic field.La Perouse was never found, and neither d’Entrecasteaux nor his ships ever returned to France. But return to Recherche Bay they did. On 22nd January 1793, the two great ships once again dropped anchor on the “very good bottom” of this calm bay. “It is difficult to express the sensations we felt,” wrote the ship’s botanist, Jacques Labillardiere, “at finding ourselves at length sheltered in this solitary harbour at the extremity of the globe, after having been so long driven to and fro in the ocean by the violence of the storms.”

The situation had become quite critical, especially on the 500 tonne frigate, L’Esperance. Despite strict rationing, her water barrels were empty. With the wind directing its course, the ship had entered Baye de Roches (Bay of Rocks) on 21st January, followed by her sister ship, Recherche. In a dramatic incident, Recherche had run aground and was stranded on the bottom for nearly three hours before being refloated, undamaged.

The sailors spent five weeks here, engaged in repairs, scientific work, mapping, botanical collection and gardening. Upon their first arrival here on 21st April 1792, Labillardière had movingly recorded his first impressions of Tasmania’s natural grandeur: “We were filled with admiration,” he wrote, “at the sight of these ancient forests, in which the sound of an axe had never been heard.” During the second visit, while camping out on an attempted walk to Mt La Perouse, the beauty and peace of the forest inspired him to record his feelings.

“Solitary in the midst of these silent woods – I felt myself penetrated with a sentiment of the grandeur of nature, which it is beyond my power to express.” Having circumnavigated Australia, they were pleased to return to the bay that had given them shelter nearly a year earlier. The ships’ journals show it was a busy time during the 23 days spent here for the 200 or more people on board the two ships. Water was collected from streams which ran into a cove. Fish were caught, firewood gathered and charcoal made.

A blacksmith fired up a forge to fix anchor chains and a rudder. Carpenters repaired masts and prepared timber for masts. Sails were dried, rigging tightened, decks scrubbed and clothes washed. A team of scientists sought specimens of plants, rocks, animals, birds and insects. Descriptions were written and artists made up numerous drawing. Astronomers set up an observatory. Astronomical observations were made and important tests proved that geomagnetism varies with latitude. 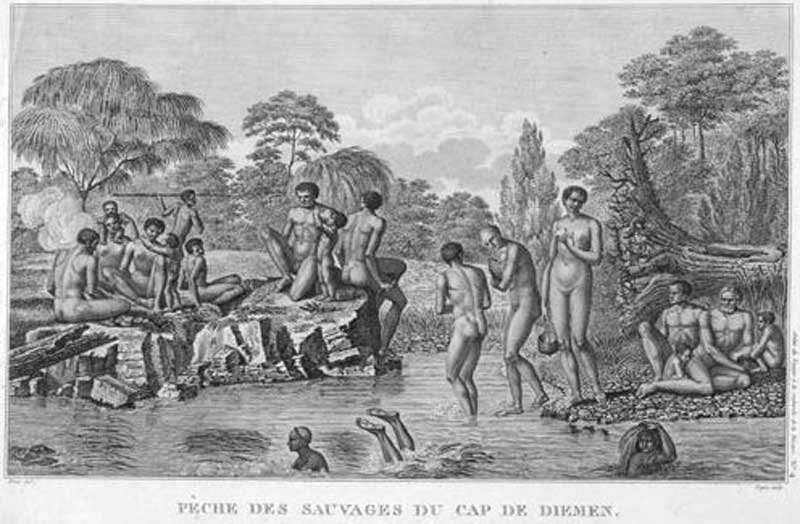 Of a meeting with 42 Lyluequonny Aborigines on 7th February 1793, Jean-Louis Feron, gunner from the Recherche, recorded, “This meeting passed off with the greatest cordiality, provided a good isea of these people and made us hope that we might see them again, and thus obtain some information on their way of life.” Meetings did follow and gifts, including knives, medals, coloured scarves, glass beads and a rooster, were presented. Fascinated French scientists took careful notes about the appearance, health, dwellings, diet, tools, clothing and vocalbulary of the Aboiriginal people they spent time with. During the final week of their stay, Labillardiere recorded a series of these meetings with local people.

“If our path was interrupted by heaps of dry branches, some of them walked before, and removed them to either side ? We could not walk on the dry grass without slipping every moment, particularly where the ground was sloping: but these good savages, to prevent our falling, took hold of us by the arm, and thus supported us.” Jacques-Mallo La Motta du Portail, Naval Lieutenant with L’Esperance, recalled, “The kindness and gentleness which seemed to be the basis of their character, gave to our meetings rather an air of reunion of friends rather than a meeting of individuals who were quite different in every way”.

Meanwhile Labillardiere identified about 100 new plant species, including the Tasmanian Blue Gum, Eucalyptus globulus, Tasmania’s floral emblem. Ninety-five per cent of his extensive Tasmanian collection came from Recherche Bay. This work was the foundation for his Novae Hollandiae Plantarum Specimen, considered to be the first general flora of Australia and still in use by botanists in the 21st Century.The expedition’s gardener was Felix de la Haie. On the first visit he constructed a garden, planting European vegetables and trees in an area nine metres by seven, divided into four and edged with stones. 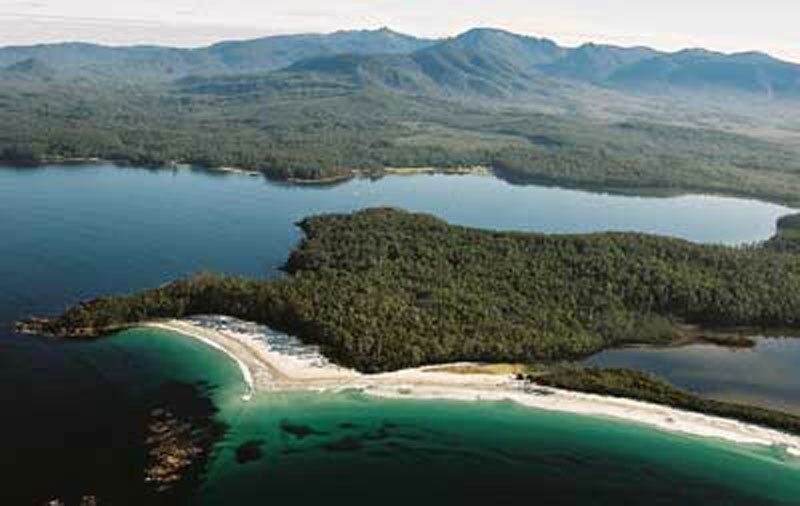 Disappointingly, few plants has survived by the second visit – the Recherche Bay garden, both botanically and conceptually, was alien to that pristine landscape, though the stone edging was rediscovered in 2003. When La Haie finally made it back to France, he became head gardener to Empress Josephine, and in 1800, at Malmaison, he established a Tasmanian garden. Just over two hundred years later, the forest of Recherche Bay were being written about again. But this time, threatened by the sound not merely of axes but of bulldozers and chainsaws. Gone also were the gentle Lyluequonny, the Tasmanian tigers (probably noted by Labillardiere as “wild dogs”) and the captivating innocence of this place.ificant outcome for the cultural historic landscape, the owners agreed to sell their historic property to the Tasmanian Land Conservancy to be managed for the nation. The deal was brokered by Senator Bob Brown, and generously underwritten by businessman Dick Smith and with the Tasmanian State Government contributing towards the purchase price of $2.5 million. Fundraising continues to repay that part of Dick Smith’s contribution that was given in the form of a loan. 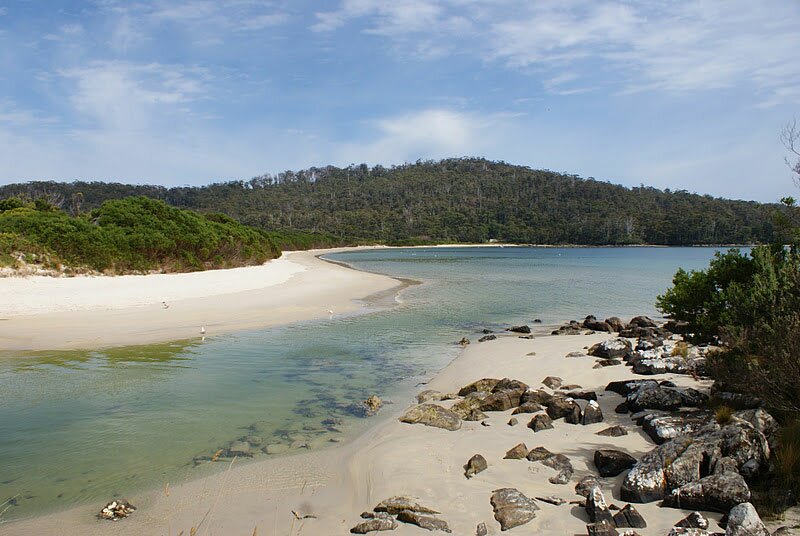 A key factor in the historic site being saved from destruction by the bulldozer was the finding of Felix de la Haie’s garden, its discovery being a valid reason for it being granted a National Heritage Listing. The garden, located on Coal Pit Point, was rediscovered by a conservation group in February 2003. One of two gardens planted by de la Haie, it measured 9 x 7 metres and originally grew potatoes, cereal grains, chicory, mustard, endive, lentil, radish, cress, sorrel, cabbage and fruit trees. It is located 75 metres in a direct line from the northern end of Crescent Beach, near coal deposits found by D’Entrecasteaux’s expedition that would be later mined by convicts 1941-48. Evidence of the garden is in the form of crumbling rock walls which mark the extremities of the garden. The site is Tasmania’s earliest known European construction.

“This site is up there with the sites of the First Fleet landing in Australia and the Mayflower landing [in North America],” said the Australian Council of National Trusts chairman, Simon Molesworth upon learning of their discovery. He predicted it would eventually rate with the Sydney Opera House and Parliament House as one of the nation’s great treasures and could deserve World Heritage listing. A second garden was located near Cockle Creek at Waterhole Bay. 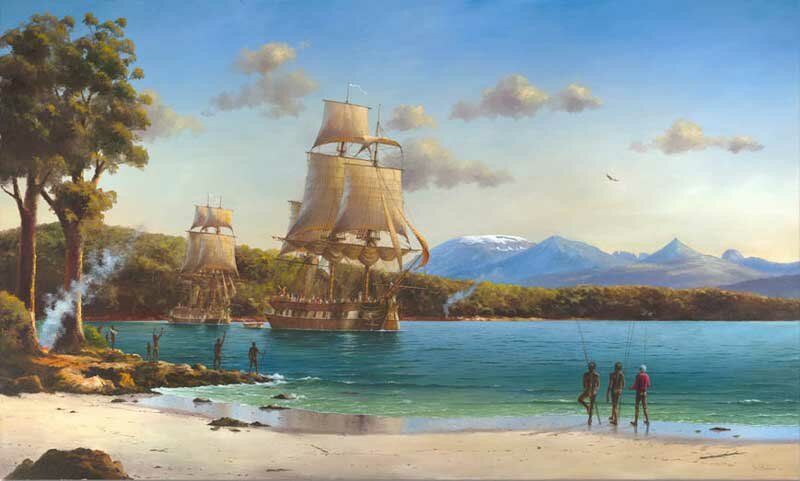 A number of other sites from the expedition’s visit – 2 watering sites (one is not as signposted), 3 astronomical observation sites, 4 other garden sites, major places of contact with Lyluequonny Aborigines, installation sites (forges, charcoal burning areas, armoury site , wash house) – are located at Recherche Bay and many have been positively identified.