Of all the convict related historic sites around Australia, none so graphically tell the story of Australia’s convict past that the ruins of the convict settlement at Port Arthur. The place is a window into modern Australia’s beginnings, and paints a vivid picture of the lives and times of those poor wretches who were transported to Australia from Britain to start a new life on the other side of the world.

After entering the Historic Site, visitors can either survey the site for themselves, or participate in guided tours of the Site, a harbour cruise, tours to the Isle of the Dead and Point Puer and evening Historic Ghost Tours. There is also a museum, containing written records, tools, clothing and other curiosities from convict times, a Convict Gallery with displays of the various trades and work undertaken by convicts, and a research room where visitors can check up on any convict ancestors. Visitor facilities include two cafes, a bistro that operates each evening, gift shop, and other facilities.

Port Arthur is 95 km south east of Hobart. From Hobart, take the A3 to Sorell and then the Arthur Highway (A9) to Port Arthur.

The penal settlement of Port Arthur, built on the shores of Masons Cove, was named after Van Diemen’s Land lieutenant governor George Arthur, under whose governorship the settlement started as a timber station in 1830, and grew into the largest penal colony in the British Empire.

From 1833, until the 1850s, it was the destination for the hardest of convicted British and Irish criminals, those who were secondary offenders having re-offended after their arrival in Australia. Rebellious personalities from other convict stations were also sent here, a quite undesirable punishment. In addition Port Arthur had some of the strictest security measures of the British penal system.

The peninsula on which Port Arthur is located is a naturally secure site by being surrounded by water (rumoured by the administration to be shark-infested). The 30m wide isthmus of Eaglehawk Neck that was the only connection to the mainland was fenced and guarded by soldiers and half-starved dogs.

Port Arthur’s reputation was that of an inescapable prison, much like the later Alcatraz Island in the United States. Some prisoners were not discouraged by this, and tried to escape. Martin Cash successfully escaped along with two others. One of the most infamous incidents, simply for its bizarreness, was the escape attempt of one George “Billy” Hunt. Hunt disguised himself using a kangaroo hide and tried to flee across the Neck, but the half-starved guards on duty tried to shoot him to supplement their meagre rations. When he noticed them sighting him up, Hunt threw off his disguise and surrendered, receiving 150 lashes.

Port Arthur was also the destination for juvenile convicts, receiving many boys, some as young as nine arrested for stealing toys. The boys were separated from the main convict population and kept on Point Puer, the British Empire’s first boys’ prison. Like the adults, the boys were used in hard labour such as stone cutting and construction. One of the buildings constructed was one of Australia’s first non-denominational churches, built in a gothic style. Attendance of the weekly Sunday service was compulsory for the prison population. Critics of the new system noted that this and other measures seemed to have negligible impact on reformation.

Despite its reputation as a pioneering institution for the new, enlightened view of imprisonment, Port Arthur was still in reality as harsh and brutal as other penal settlements. Some critics might even suggest that its use of psychological punishment, compounded with no hope of escape, made it one of the worst. Some tales suggest that prisoners committed murder (an offence punishable by death) just to escape the desolation of life at the camp. The Island of the Dead was the destination for all who died inside the prison camps. Of the 1646 graves recorded to exist there, only 180, those of prison staff and military personnel, are marked. The prison closed in 1877.

After the closure of the penal colony the site was renamed to “Carnarvon”. During the 1880s the land in and around the site was sold off to the public and a community was established. Devastating fires tore through the area in 1895 and 1897 gutting the old prison buildings, leading to the establishment of the new town, with post office and other facilities.

Tourism started up almost as soon as the last convicts had left, supplying the new residents with a source of income, part of it undoubtedly due to its unsavoury past, and the ghost stories that accompany it. In 1927 tourism had grown to the point where the area’s name was reverted to Port Arthur.

By the 1970s the National Parks and Wildlife Service began managing the site. In 1979 funding was received to preserve the site as a tourist destination, due to its historical significance. The “working” elements of the Port Arthur community such as the post office and municipal offices were moved to nearby Nubeena. Since 1987, the site has been managed by the Port Arthur Historic Site Management Authority, with conservation works funded by the Tasmanian Government and the admission fees paid by visitors.

Several magnificent sandstone structures, built by convicts working under hard labour conditions, have been cleaned of ivy over growth and restored to a condition similar to their appearance in the 19th century. Buildings include the Model Prison, the Guard Tower, the Church, and the remnants of the main penitentiary. The buildings, now open for inspection by visitors to Port Arthur, are surrounded by lush green parkland.

Things To See And Do: 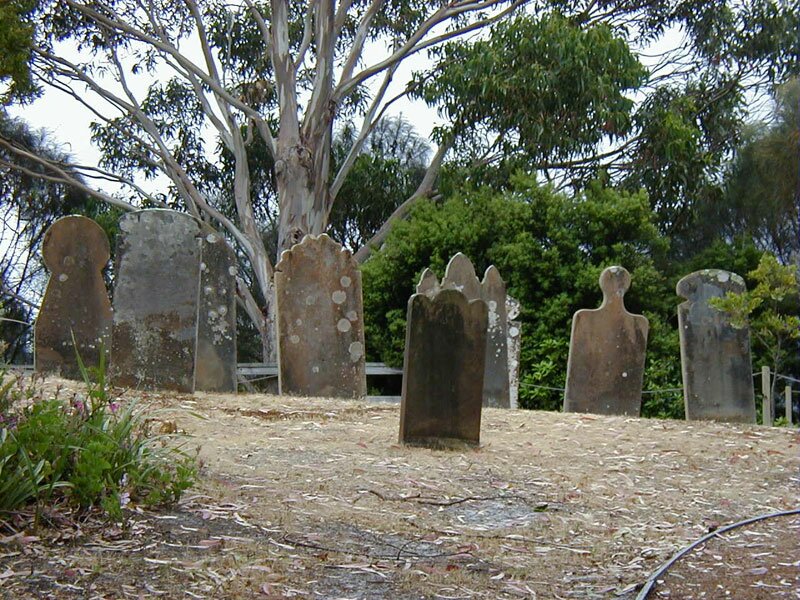 Isle of the Dead

Next time you visit the ruins of the Port Arthur Penal Settlement on Tasmania Peninsula in Southern Tasmania, be sure to include a boat trip out to the Island of the Dead if you haven’t already been there. The cruise to this small island includes a guided tour, which presents Port Arthur’s history from a totally different point of view to that which is normally told. The tour highlights the human side of the Port Arthur story by offering an insight into the lives of the people who lived and died there.

The Isle of the Dead is a small island located in the harbour off Point Puer adjacent to the Port Arthur Historic Site, Tasmania. It is a small, picturesque island roughly the size of Sydney's Fort Denison, and lies in the bay between the prison and the open ocean. Originally called Opossum Island, it was selected as a burial place by the Rev. John Manton in 1833. Between 1833 and 1877, about 1,000 burials took place on the island; The majority were convicts and ex-convict paupers who were buried mostly in unmarked graves on the lower part of the island.
The graves of free people - 180 officials, soldiers, women and children - were located in the higher side of the island and sometimes marked by elaborate headstones cut by the convict stonemasons. The island was originally name Opossum Island after a vessel, the Opossum, sought shelter near the island in 1827. It became the burial place for Port Arthur in 1831 (only months after the establishment of the settlement) and almost immediately was divided into free settler and convict burial grounds. At this time it was known simply as Dead Island.

The Isle of the Dead is far from being a gloomy place, though it must have been in Port Arthur's heyday. The novelist Anthony Trollope visited it in 1872 and was much taken by the grave digger John Barton who lived on his little island all alone. Trollope wrote: To the extent of the island he was no prisoner at all, but might wander whither he liked, might go to bed when he pleased, and get up when he pleased, might bathe and catch fish or cultivate his little flower garden. Twice a week his rations were brought to him and in his disposal of them no one interfered with him. Trollope was fascinated that the grave digger would grow flowers on his island but no vegetables, fearing no good would come of eating produce grown among such distressed bones.

Just minutes away from Sea Change Safety Cove, the Tasman Golf Course is a wonderful 9 hole course, nestled in the tranquil and historic environs of Point Puer, has plenty to offer both the casual golfer and the more serious player. For pure spectacle,you can’t beat the amazing par 3 eighth hole at the Tasman Club, near Port Arthur – your tee shot has to reach a pocket-handkerchief green on the far side of a deep chasm, where vertical sea cliffs plummet down to surging ocean swells and tossing bull kelp, far below. Telephone (03) 62502444

A truly remarkable work of nature, Remarkable Cave has been carved out of the rock of Safety Cove. The cave, which is actually a natural bridge with two entries from the sea, was created over millions of years by the raging seas which pound this isolated coastline. A staircase leads from the cliff top down right into the mouth of the cave. At low tide it is possible to walk through the cave to the ocean side of the cliffs.