The tiny village of Pontville, located just a few kilometres from Brighton, became an important stopping point on the road from Hobart to Launceston in the 1830s and effectively replaced Brighton which, at one time, had been promoted as a possible future capital of the island. From this time on it became one of the major suppliers of stone for the whole southern region of Tasmania.

The area around Pontville was first explored by Europeans in early 1804 and by 1806, with serious food shortages in Hobart Town, expeditions of soldiers were being sent into this area to kill kangaroos and emus. It is claimed that during one of these expeditions Private Hugh Germain, a well educated member of the Royal Marines, started giving various local sites exotic names. Thus, only a few kilometres north of Pontville, lies the incongruously named village of Bagdad and Pontville is actually situated on the banks of the equally incongruously named, Jordan River.

It is said that Germain travelled through the area with a copy of The Bible and the Arabian Nights and delighted in giving places names like Jerusalem, Jericho, Jordan, and Lake Tiberius. In fact the headwaters of the Jordan River rise in Lake Tiberius before flowing through Jericho.

By the 1820s there was a small settlement at Pontville but the real development of the village occurred in the 1830s and 1840s when it took over from Brighton and became a major centre for the district and an important traveller's stopping point on the road between Port Dalrymple (Launceston) and Hobart.

Pontville was developed on land which was originally owned by William Kimberley. In 1838 this land was sold and a number of important buildings - the Police Station (1839), the Courthouse (1842) - were constructed.

By the mid 1840s the town was thriving with a population of over 2000 people. By the 1860s there were six flour mills operating in the area.

Although the town's growth occurred in the 1840s many of the old buildings predate this period of development. 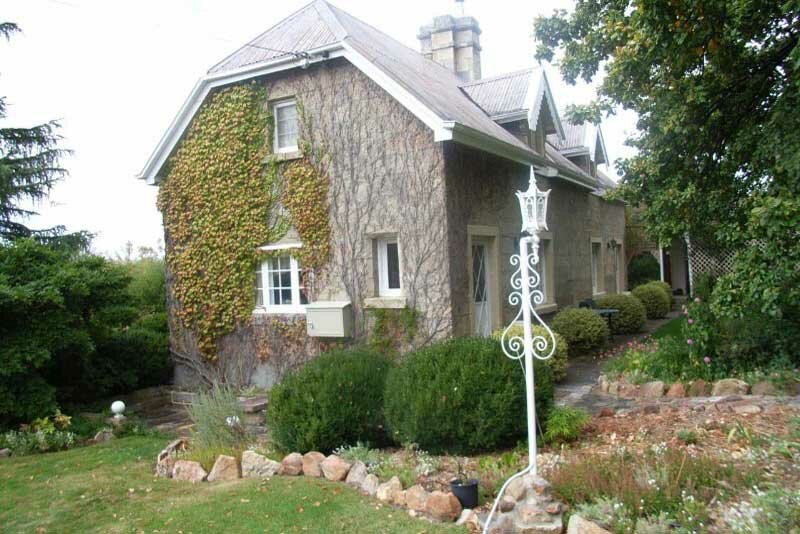 The Sheiling
The Sheiling, located behind St Marks Church of England, dates from about 1819 and was originally constructed as two separate cottages. The strange name is nothing more complex than the Gaelic for 'cottage'. The land was sold to William Kimberley in 1818 and he built the cottages on what was the main road through the village. It is likely that the house was used by the local police at one stage. It was converted into a single private residence in the early 1950s.

The Row or The Barracks
Similarly 'The Row', known sometimes as 'The Barracks', near the bridge over the Jordan River, was built in 1824 as accommodation for soldiers. The building is a combination of five cottages - three with roof dormers and two larger cottages with three bays. As a row of dwellings it is an important feature of Pontville. It is now accommodation.

The Old Post Office
Further along the Midland Highway, near St Mark's Church, is the Old Post Office which was built sometime before 1830 to house the Officer's Mess. There is some evidence that in the 1850s, when a timber verandah was added, it was a coaching inn. In 1861 it became the Pontville Post Office. It is currently an antique and gift shop.

35 km north of Hobart on the Midlands Highway. 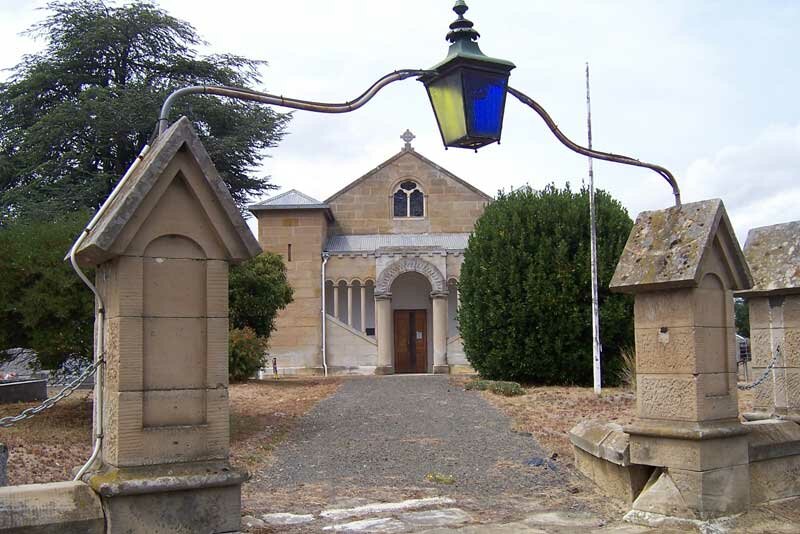 St Marks Church of England
However the majority of the historic buildings in Pontville date from the 1840s and 1850s. St Marks Church of England, on the Midland Highway, was built between 1839-41. The National Estate register records the importance of the building in great detail: 'A very unusual Romanesque-style church designed by noted architect James Blackburn and built of finely tooled local white ashlar stone in 1839-41.

It is not a large structure, comprising only four bays, and is symmetrical in composition, featuring a simple pitch-roofed nave with Celtic crosses at each gable end and square towers at each corner. The latter are pyramid-roofed in iron and their smooth walls are interrupted only by fortress-like slits. The church and graveyard together are relics from the early years of the Colony and are inseparably associated with the religious and social developments of the district.'

It is likely that the church was opened by the Governor, Sir John Franklin, although the foundation stone can no longer be seen. It was not consecrated until 1884 as there was a legal dispute over the ownership of the land.

Brooksby
Over the road from St Mark's is the historic home 'Brooksby' (c. 1840) which was originally built for Lieutenant George Brooks Foster, the Assistant Police Magistrate in the district. In 1874, after it had been used as a boarding school, it was sold to the Butler family. 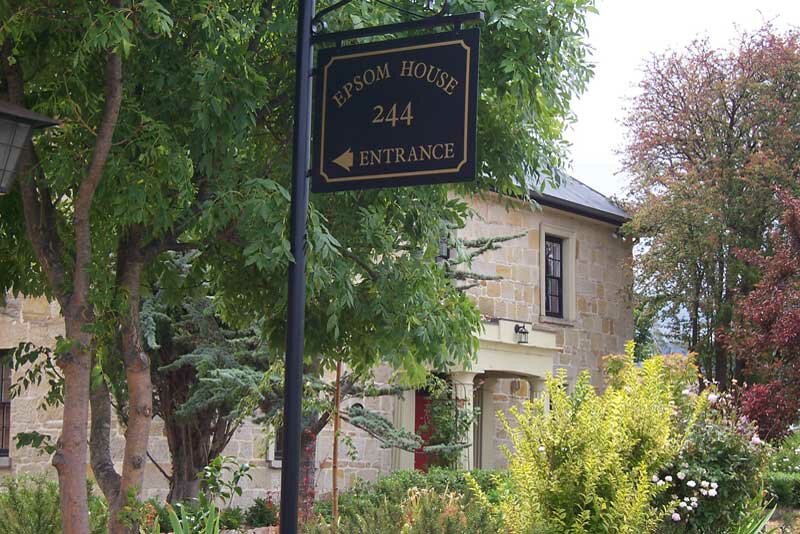 Other Historic Buildings
Other buildings of interest in Pontville include 'Landsdowne' at 4 Glebe Street which was built around 1840 with a wide verandah and interesting diagonal balustrading, the Pontville Bridge (1847) which has been considerably modified over the years, the Congregational Church (1876) which is built of local stone, 'Epsom' (c. 1835) which has been variously known as 'The Castle Inn and Brighton Hotel', 'Tasmanian Hotel' , 'The Crown Inn' and 'Epsom Hotel', and the Roman Catholic Church of St Matthew (1866) which was gutted by fire and rebuilt in 1927-28.