Hobart is defined by Mt. Wellington. Rising 1270 metres above Hobart's harbour and the wide Derwent River, it forms a stunning backdrop to the city while the spectacular vista from the top encompassing the surrounding islands and estuaries is truly world class. The summit may be a short drive from the city centre but is a world removed, a true mountain environment complete with unpredictable weather, stunted sub-alpine flora, and a complex of buttresses, outcrops, screes and gullies.

The short 21-kilometre drive to the summit takes you from temperate rainforest to sub-alpine flora and glacial rock formations, ending in panoramic views of Hobart, Bruny Island, South Arm and the Tasman Peninsula.

Mt. Wellington is frequently snow covered, sometimes even in summer and the lower slopes are thickly forested, but criss-crossed by many walking tracks and a few fire trails. There is also a sealed but narrow road to the summit, about 22 km travel from the city which is a must-see for visitors to Hobart. The enclosed interpretation centre at the top protects you from the blustering winds and an open viewing platform on the western side of the car park looks out to the southern World Heritage Area beyond.
History
In 1798 Matthew Flinders and George Bass circumnavigated the island. Whilst they were resting in the area Flinders named the river the Derwent River (the name John Hayes had given only to the upper part of the river)[1] , Flinders referred to the mountain as ‘Table Mountain’ (the name given to it by Bond and Bligh - young Matthew Flinders was with them in 1791) for its similarity in appearance to Table Mountain in South Africa.

Bruni d'Entrecasteaux's men where the first European to sail up the river and chart it. Later Nicholas Baudin led another French expedition in 1802, and whilst sheltering in the Derwent River (which they referred to as ‘River du Nord’ - the name d'Entrecasteaux had given to it) Baudin also referred to the mountain as ‘Montagne du Plateau’ (also named by d'Entrecasteaux). However, the British first settled in the Hobart area in 1804, resulting in Flinders’ name of ‘Table Mountain’ becoming more popular.

Table Mountain remained its common name until in 1832 it was decided to rename the mountain in honour of the Duke of Wellington who, with Gebhard Leberecht von Blücher finally defeated Napoleon at the Battle of Waterloo in present-day Belgium on 18 June 1815.

Throughout the 19th and into the 20th centuries, the Mountain was a popular day-resort for residents of Hobart. To that end, many excursion huts were built over the lower slopes of the mountain. However, none of these early huts survive as they were all destroyed during the disastrous bushfires of 1967, though modern huts are open to the public at the Springs, the Pinnacle, the Chalet - a picnic spot about halfway between the Springs and the Pinnacle - and elsewhere. Sadly, many of the more remote huts have suffered from vandalism, and some are in virtually derelict condition.

The road to the summit was constructed in the early 1930s as a relief scheme for the unemployed, an idea initiated by Mr. AG Ogilvie, the Premier of Tasmania of the day. While the road is officially known as the Pinnacle Drive, it was, for some time, also widely known among residents of Hobart as 'Ogilvie's Scar' because at the time it was constructed 'the Mountain' was heavily logged and almost bare, and the road was an all-too-obvious scar across the already denuded mountain. Today the trees have grown again but the 'scar' most people see today is not actually the road but a line of large rocks with no trees 50-100 m above the road.

In February 1836, Charles Darwin, visited Hobart Town and climbed Mt. Wellington. In his book "The Voyage of the Beagle", Darwin described the mountain thus; "... In many parts the Eucalypti grew to a great size, and composed a noble forest. In some of the dampest ravines, tree-ferns flourished in an extraordinary manner; I saw one which must have been at least twenty feet high to the base of the fronds, and was in girth exactly six feet. The fronds forming the most elegant parasols, produced a gloomy shade, like that of the first hour of the night. The summit of the mountain is broad and flat, and is composed of huge angular masses of naked greenstone. Its elevation is 940 metres above the level of the sea. The day was splendidly clear, and we enjoyed a most extensive view; to the north, the country appeared a mass of wooded mountains, of about the same height with that on which we were standing, and with an equally tame outline: to the south the broken land and water, forming many intricate bays, was mapped with clearness before us. ..." 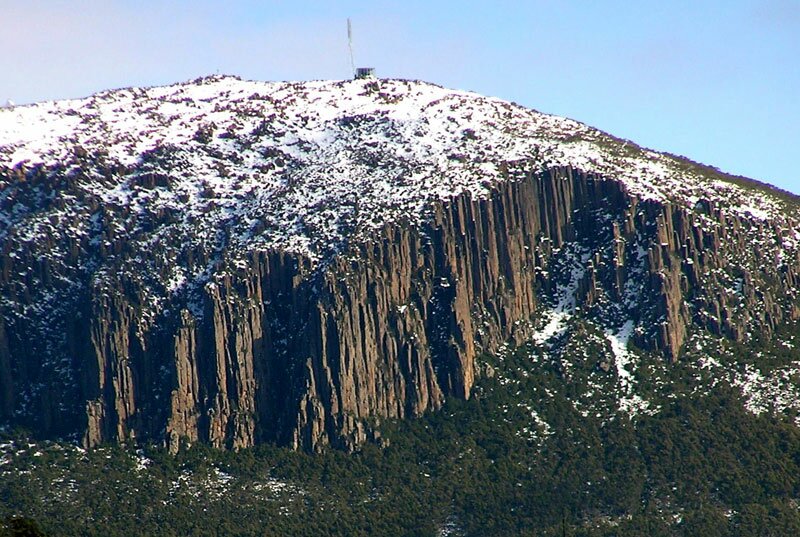 Situated directly below the summit at an altitude of 1000m is the largest and most conspicuous crag on the mountain, the Organ Pipes. Visible further to the right and tucked beneath the subsidiary peak of Mt. Arthur, is the boutique crag of Lost World. Both are popular with rock climbers.