The Mole Creek Karst National Park was declared in 1996 to provide protection for some of the finest and most visited cave systems in the State, including Marakoopa and King Solomons Cave. Both caves are open to the public, and provide the opportunity to take a deeper look into the fascinating world of ���karst��� landscapes.

The Mole Creek area is renowned for its caves. Marakoopa and King Solomons Caves are but two caves in an area that contains over 300 known caves and sinkholes. Other typical karst features in this area include gorges and large underground streams and springs.

Both caves are home to a range of fascinating animals which have evolved features which allow them to adapt to their lightless environments. The glow-worm display in Marakoopa Cave is the largest you���ll see in any public access cave anywhere in Australia. For the visitor, the Mole Creek Karst National Park offers a range of activities. Although guided tours of the caves will be high on your agenda, don���t miss the opportunity to take a short walk through the beautiful forests in which these caves occur.

Marakoopa and King Solomons Cave are both open to the public. Both are spectacular and differ greatly in their features.

Marakoopa Cave features two underground streams, a large display of glow-worms, large caverns, rim pools, reflections and shawl and flowstone features. ���Marakoopa��� is a Tasmanian Aboriginal word meaning handsome. After taking a tour of the cave you will understand why it is so named.
Tours are approximately 45 minutes in duration. There are two unique tours in Marakoopa Cave:
Underground Rivers and Glow-worms
Visit the lower chamber to be dazzled by sparkling crystals and reflective pools of stalactites. Take time to listen to the music of underground creeks and soak up the silence of abandoned river passages. This easy tour caters for all age groups and levels of fitness.
Cathedral, Gardens and Glow-worms
The magnificent cavern known as the ���Great Cathedral��� is a highlight not to be missed. The ���Gardens��� feature delicate formations and beautiful colours. Medium fitness levels are required to ascend the stairway to the ���Great Cathedral���.

An easy 1/2 hour loop ���all-weather��� walk starts at the Marakoopa Cave car park and leads to the cave entrance, following the creek as it tumbles down the hillside from inside the cave itself. More information:��Kentish Visitor Information Centre. Phone: 03 6491 1036.

King Solomons Cave is jam packed with features and lavishly decorated with shawls, stalactites and stalagmites.��This small but compact cave displays a range of formations and caters for all age groups and levels of fitness. All tours are approximately 45 minutes in duration.��Further information is available at Mole Creek Caves Office Telephone (03) 6363 5182.��Both caves are open seven days a week except Christmas Day. Fees are charged for the cave tours.

Both reserves have shelter huts, toilets, picnic areas with electric barbecues and nature trails. Food and petrol may be bought in the nearby township of Mole Creek, where accommodation is also available.��For further information contact the Senior Ranger, Mole Creek, phone: (03) 6363 5182.

Kubla Khan at Mole Creek is also a long cave (2.2 km), but its fame lies in its incredibly rich formations.The cave is not open to the general public, but its 18 m high stalagmite, known as the Khan, is famous.The Khan is in a huge chamber called Xanadu.This cave also contains a flowstone floor which is 40 m long, and terraced up to a height of 15 m! This is a limited access cave with permits issued only to recognised speleological groups. 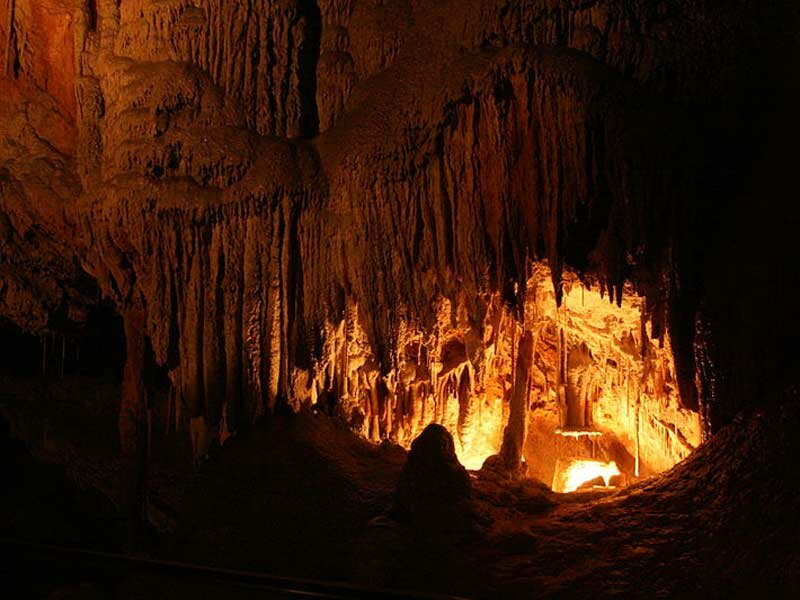