A unique location where the visitor feels they have left civilization behind and stepped into another world. There are no noisy cars or machinery, just the sound of the wind rustling in the trees and the occasional bird calling to another. The air is clean; the only smells that accost the nose are the perfumes of the plants in the bushland and the salt in the air, blown off the sea which surrounds you. The whole place is a treat for the senses, and an opportunity to experience something civilisation lost more than a century ago.

The island state of Tasmania is full of places with all the creature comforts one expects while travelling, yet by taking a short drive or boat trip from them, you can be somewhere that feels for all the world like it's a thousand miles from anywhere. Such a place is Maria Island on Tasmania's picturesque east coast. Take the 25-minute journey across the water from the fishing village of Triabunna to Maria Island and suddenly it's as if you have left civilization behind and stepped into another world. The only way to get around is on foot or bicycle; there are no cars, no roads, no towns (except for a few clusters of colonial buildings), no shops, no running water and no one lives there.

So what, to a traveller, is the attraction of a place that has none of the above? For starters, the very fact that it has none of the above. There are no noisy cars or machinery, just the sound of the wind rustling in the trees and the occasional bird calling to another. The air is clean; the only smells that accost the nose are the perfumes of the plants in the bushland and the salt in the air, blown off the sea which surrounds you. The whole place is a treat for the senses, and an opportunity to experience something civilisation lost more than a century ago. It's all about you and nature, and nothing else, except for a few colonial ruins that are a reminder of a failed attempt to bring civilisation to a place that didn't want to be tamed.

Not unlike Bruny Island to the south of Hobart, Maria Island takes the form of a figure-eight, its two sections are joined by a tombolo about 3 km long known as McRaes Isthmus. The northern section of the island is significantly larger than the southern, though both parts have quite rugged relief. It is a mountainous island - Mount Maria rises to 710 m an Tthe Bishop and Clerk reaches 915 m - which makes it an ideal place for bushwalking. The reward for the effort are its magnificent vistas across eastern Tasmania's picture postcard coastal landscape, which encompasses sweeping bays, rugged cliffs that tumbling into the sea, jagged rocky outcrops and beaches. Lying four kilometres off the coast at its closest point (Point Lesueur), Maria Island is about 20 km in length from north to south and, at its widest, is about 13 km west to east. A day trip is just enough time to get the feel of the place, but to explore it in detail you would need much more.

There is but one "town" on Maria Island and a peculiar one it is by any standards! It is called Darlington and it lies near the northern tip of the island. Dotted with many wonderful old buildings, this colonial settlement was built as a penal colony. It has no permanent inhabitants these days other than a few park rangers who stay during peak periods. Everyone else on the island - up to several hundred a day during the summer holidays - are tourists who come and go. 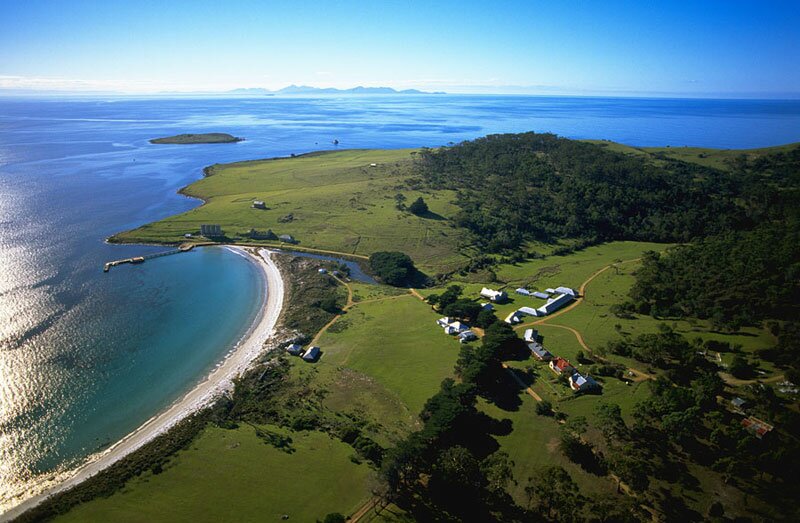 Maria island is accessible by ferry, boat or light aircraft. Visitors can stay for a few hours or a few days. Once on the island, you will find yourself walking or bicycling in friendly natural surroundings, with no cars, no electricity, no shops and no distractions. There is limited accommodation and limited water supply, visitors have to bring their own food and water, sets of clothes for all weather conditions, any other equipment including bicycles (mountain bikes are available for hire from the ferry operator) they may need or want, and bedding if staying overnight. Activities include short strolls, medium and overnight bushwalks, bicycling, visiting historic and natural features, seeing wildlife at close quarters, birdwatching, boating, kayaking, snorkelling, scuba diving, swimming, fishing, climbing, camping and photography. 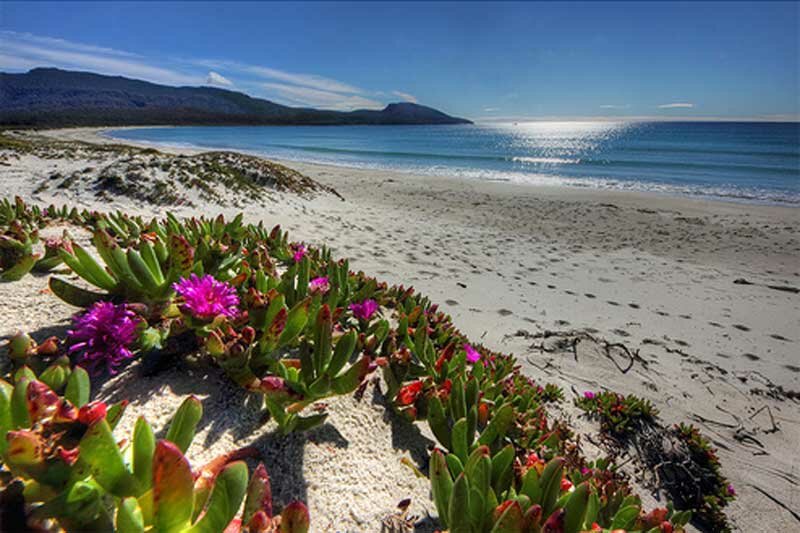 On the eastern side of the island, Riedle Beach rivals Tasmania's more famous Wineglass Bay in its beauty. But while Wineglass Bay is perpetually busy with tourists, you'll find hardly another soul at this wide sandy 5 km-long beach. Riedle Bay sits on the eastern side of Maria Island's narrow sandy isthmus. There are giant granite rocks at each end of the beach, and a myriad of shells on the shoreline. With a bike, Riedle Beach is a 90-minute cycle ride from Darlington settlement. 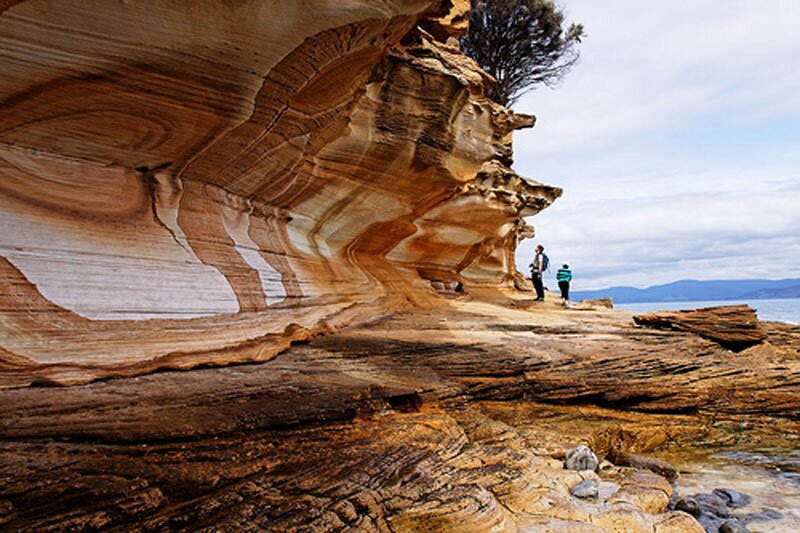 Maria Island has sparkling white sandy beaches and a coastal mountain range with lush gullies, but its spectacular limestone and sandstone cliffs are what most visitors to the island recall. The Painted Cliffs are one of nature's masterpieces. Beautifully coloured and patterned sandstone, carved and moulded by the sea, and bordered by rock pools teeming with marine life. Although this sort of rock formation is not uncommon, it is rare in a natural situation for it to be so extensively and beautifully exposed. The wonderful patterns are caused by ground water percolating down through the already formed sandstone and leaving traces of iron oxides, which have stained the rock formation. This probably occurred millions of years ago in a monsoonal climate.

More recently, sea spray hitting the rock face has dried, forming crystals of salt. These crystals cause the rock to weather in the honeycomb patterns that you see. Wave action has also created some interesting features. Rock fragments moved around by the water have gradually worn small potholes and notches into the cliff face, eventually resulting in the undercutting of the cliff. This is a continual process and as you walk further along you can see how quite recently the cliff top has collapsed, plunging sandstone blocks and she-oaks down to the sea.

The reserve is located along the northern shores of the island. Note, fishing is prohibited in the reserve (except recreational fishing, and only then in the area east of Cape Boullanger, the point facing Ile du Nord, near the Fossil Cliffs). Activities at the Reserve include rockpool scrambling, snorkelling and diving. Water temperatures vary 11-20 degrees C with the seasons, and you will see spectacular seaweeds, sponges, anemones, crabs, various invertebrates and fish. Dive tanks can be refilled in Orford. 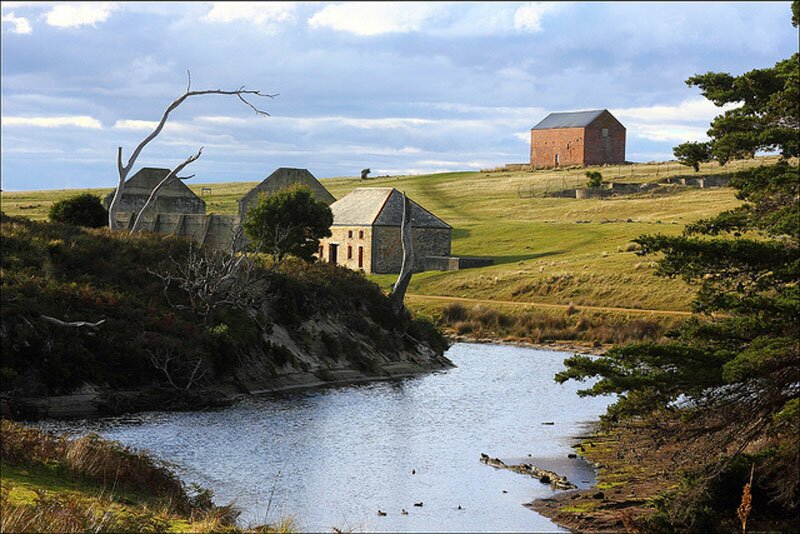 Historic displays are set up in the Commissariat Store, Mess Hall, William Smith O'Brien's Cottage and Coffee Palace. They document the island's history, its convicts and later settlers, and interpret the ruins and restored heritage. Animals and birds are often seen among the open woodlands and clearings around Darlington. A walk up the hill leads to the convict built reservoir and the old limestone quarries. Historic Guided Tours are available by arrangement with Park staff.