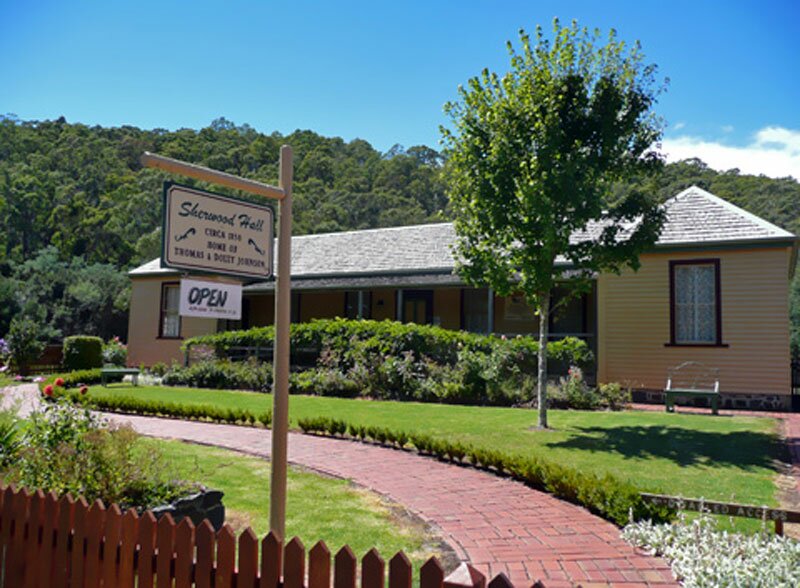 Circa 1850���s, the original colonial home of pioneering ex- convict Thomas Johnson and Dolly Dalrymple Briggs has been restored to its former glory; fully furnished right down to the lace doilies, enjoy the voice over commentary.

Sherwood Hall is believed to be the oldest house in Latrobe, built between 1848-1850 by Thomas Johnson, a pioneer and settler who began life in Van Dieman���s Land as a convict and his wife Dolly Dalrymple Briggs, the first known child of an Aboriginal and white person union.

Thomas Johnson moved to the Mersey in 1845 and took over the tenancy of ���Frogmore��� and during this time began to acquire a considerable amount of property. Some 500 acres of land in the Tarleton area where he opened up a coal mine, and 500 acres at Sherwood, southwest of Frogmore, where he and Dolly built ���Sherwood Hall���.

Sherwood Hall was occupied until 1970 when a major flood made it no longer habitable. Advice received indicated that the property was one of the most unique wooden colonial homes in Australia and that the building should be preserved at all costs. A decision to restore this unique pioneering couple���s home was made some twenty years ago but did not eventuate until 1991 when a special meeting was called. This meeting formed a steering committee of interested persons, including descendants.

A target of $9,000 was set which would enable the proposed site at Bell���s Parade to be prepared and the house prepared for relocation on the new foundation. Support and assistance was gained from the Mersey Skill Training Centre who carefully numbered and recorded every piece of timber to enable accurate re-erection.

When Sherwood Hall was relocated on site in Bell���s Parade there was much more to be done. The weatherboards on all walls except under the verandah had to be renewed and shingles for the roof had to be found. Internal doors to suit the era had to be found or made, windows and hand made bricks for the chimneys to be obtained. It seemed a mammoth task but the work was completed in accordance with approved heritage processes.

���Sherwood Hall��� was officially opened on Tasmania Day, 26th November, 1995 and was also the anniversary of 150 years since Thomas and Dolly came to the Sherwood and Tarleton area. The building has become a monument to the history of our early settlers and also acts as a museum displaying many items that were used widespread during the era.