Approximately 16 kilometres long and rarely more than half a kilometre wide, Lake Barrington is a deep clear lake with mostly steep tree lined shores. In the 1960s, the Tasmanian Hydro Electric Commission built three dams on the Forth River to form Lake Cethana, Lake Barrington and Paloona Dam.

Lake Barrington is best known for its 2,000 metre, eight-lane international-standard rowing course, used for rowing, canoeing and water skiing competitions. The 183-hectare Lake Barrington State Recreation Area hugs the Lake���s foreshore. Here, tall eucalypt and lush rainforest shelters a diversity of native wildlife. The Recreation Area has a large day visitor shelter with wood barbecues, picnic tables and stretches of lawn along the shore. There is an adventure playground and a two-hour rainforest walk.

Toilet facilities on the eastern side of the Lake have wheelchair access and a kiosk operates on weekends throughout summer and during major sporting events. There are also boat-launching ramps on both sides of the Lake. Camping in the State Recreation Area is not permitted, but campsites can be found at the northern end of the Lake at Kentish Park. Bring along your own equipment and spend long summer days here rowing, water skiing, power boating, canoeing and model yachting.

Midway along the eastern side of the lake via West Kentish Road, is Kentish Park. This area is a very popular water skiing area with two good concrete boat ramps. Despite the roaring engines, fish are still caught here from the shore, especially early morning and late afternoon.

Lake Barrington has a healthy population of rainbow and brown trout. Large stocks of Atlantic salmon have been introduced into the Lake, some up to 30 pounds, testing the nerves of even the most seasoned anglers. The lake is one of the few in our State that is open to all forms of freshwater fishing throughout the year. A five fish per angler bag limit applies to Atlantic salmon, brown trout and rainbow trout with a minimum size of 300mm. For the shore based angler quite a bit of fishable shore is accessible at Kentish Park.

Access to Lake Barrington from the west is via Barrington Road from the town of Wilmot. At the end of Barrington Road there is another good boat ramp and a few more places to cast a line. This boat ramp is also a popular launching site for ski boats with Kentish Park on the opposite side of the Lake. 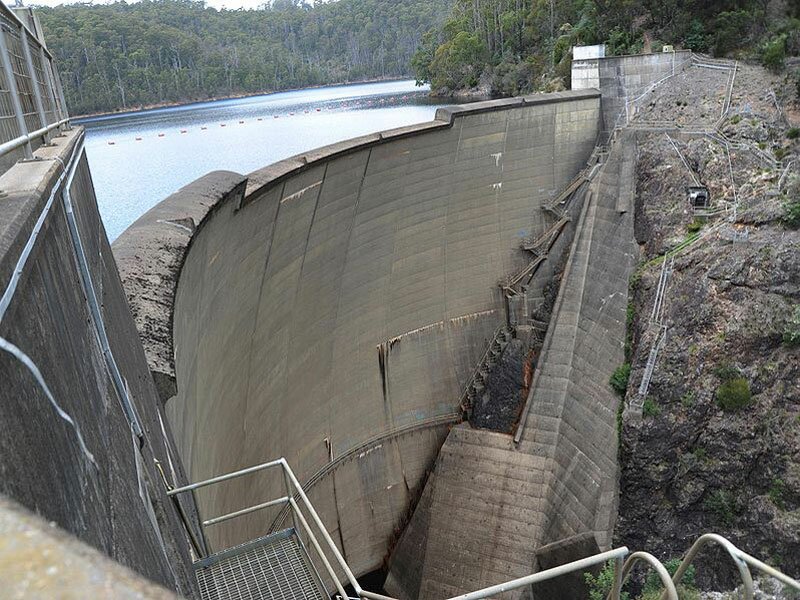 The 84 metre high Devils Gate Dam is a spectacular concrete arch structure that forms Lake Barrington. It was built on the Forth River in 1969 to provide a head of water for the Devils Gate Power Station. The Mersey Forth generates around 16 per cent of Tasmania���s energy needs.

The dam wall, at the northern end of Lake Barrington, is about a 20-minute drive inland from Devonport via Devils Gate Road. The steep tree lined shores here limit most of the shore based fishing to the boat ramp area located a few hundred metres up from the picnic area at the dam wall.