Anglicanism has remained the largest Christian denomination in Tasmania during two centuries of European settlement. For the first half of the nineteenth century the Church of England was treated by government as the colony's official though not 'established' religion. Robert Knopwood, the first colonial chaplain, carried responsibility for the spiritual oversight of the entire colony until the appointment of a Launceston-based chaplain in 1818. 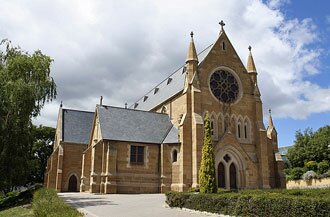 As in Britain and Europe, so in colonial Australia, Gothic was the style of predominant architecture cstyle chosen for churches. There was the odd exception - with the building of St Mark's Pontville, St Thomas' Anglican Church at Avoca (1842) the Presbyterian Church at Glenorchy and New Town Congregational church, colonial architect James Blackburn was the first to introduce the Romanesque style to Australian church architecture. Otherwise, Gothic ruled. 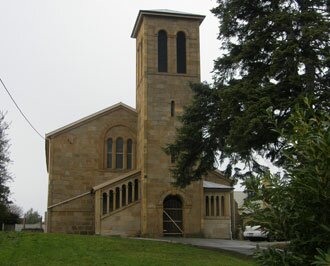 Originating in 12th century France that, the Gothic style flourished during the high and late medieval period and lasted well into the 16th century. A series of Gothic revivals began in mid-18th century England, spread through 19th-century Europe and their colonies, and continued, largely for ecclesiastical and university structures, into the 20th century.
The Gothic style - expressed most powerfully in the great churches and cathedrals of the world - evolved from Romanesque architecture and was succeeded by Renaissance architecture. The Gothic style, when applied to an ecclesiastical building, emphasizes verticality and light. This appearance was achieved by the inclusion of certain architectural features, which together provided an engineering solution. The structural parts of the building ceased to be its solid walls, and became a stone skeleton comprising clustered columns, pointed arches and ribbed vaults and flying buttresses.
Most Gothic churches, unless they are smaller chapels, are of the Latin cross (or "cruciform") plan, with a long nave making the body of the church, a transverse arm called the transept and, beyond it, an extension which may be called the choir, chancel or presbytery.
In Gothic Architecture the pointed arch is used in every location where a vaulted shape is called for, both structural and decorative. Gothic openings such as doorways, windows, arcades and galleries have pointed arches. Gothic vaulting above spaces both large and small is usually supported by richly moulded ribs.

Having their grounding in the architectural schools of Britain, Australia's colonial architecture followed the style and trands of mother England. The designs of Cathedrals and larger churches were lifted straight out of the copybooks of Gothic church architecture. Smaller regional churches, particularly of the Christian denominations that were restricted in what they could build because of lack of funds, introduced elements of Gothic architecture to what were essentially simple Georgian structures made out of freestone, so as to make them easily identifiable as places of worship.

Declining church attendances and rising costs began to pose acute problems for Australia's Churches in the late 20th century, compounded by the burden of maintaining their many historic buildings. Most were covered by heritage listing status, which required a level of maintenance many congregations could no longer afford, if indeed a congregation still existed to provide maintenance. As a result, many have been sold and are now used for other purposes, from dwellings, to craft shops, travel information centres and meeting halls for various organisations.

The churches here are representative of the hundreds of churches across Tasmania that were erected in the 19th century. It is by no means a complete list, neither is a church's exclusion an indication that it is of lesser importance or significance that those listed. 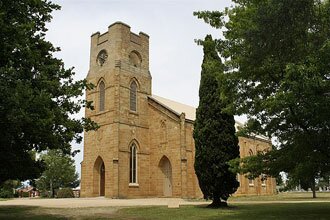 Sited in an attractive and expansive church yard in the centre of the historic town of Longford, Christ Church was constructed between 1839 and 1844 to the design of Robert de Little and consists of a broad buttressed nave with cast iron columns (added in 1878). de Little (1808-76) came to the colony in 1830 and established himself in Launceston as a builder and architect.

The magnificent five-light east window, with Perpendicular Gothic tracery, depicting Christ and the Four Evangelists, was made by William Wailes, of Newcastle-upon-Tyne in 1842 and was probably the earliest figural window in the country.

The carved altar in arts and crafts idiom was designed by Alexander North. The sandstone exterior is dominated by an imposing west-end tower which was completed as recently as 1960 through the raising of the stonework by around 5 metres. 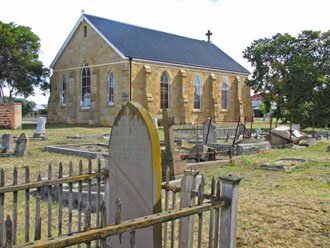 There are three National Estate listed churches in Sorell. Of the three, St George's Anglican Church is the most impressive. Built in 1826 and rebuilt in 1883, is of a gothic style, characterized by its gabled iron roof, with closed eaves and walls. The walls are made of coarse sandstone and have buttresses at regular intervals. As well as the church, there is an adjacent graveyard, featuring graves dating back to the 1830s, and grounds which now contains the Sorell Visitors Information Centre and a small park. Whilst the church is of a simple design, but up close the workmanship is outstanding. 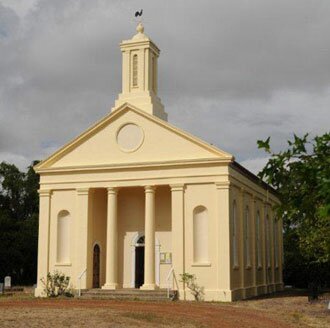 A much admired example of Greek Revival Architecture, St. Andrews is recognised as the best preserved or restored place of worship in Tasmania. The Governor, Sir John Franklin, laid the foundation stone in 1838, the church was opened two years later. Since its door opened, St Andrew's has served the Presbyterian Congregation of Evandale and its surrounding environs and lately as the Uniting Church of Australia. Its first minister, Rev. Robert Russell, was a young Scot when he arrived in Evandale to commence his parish duties on the 9th April 1838. At that time there was no church building and services were being held in private residences.