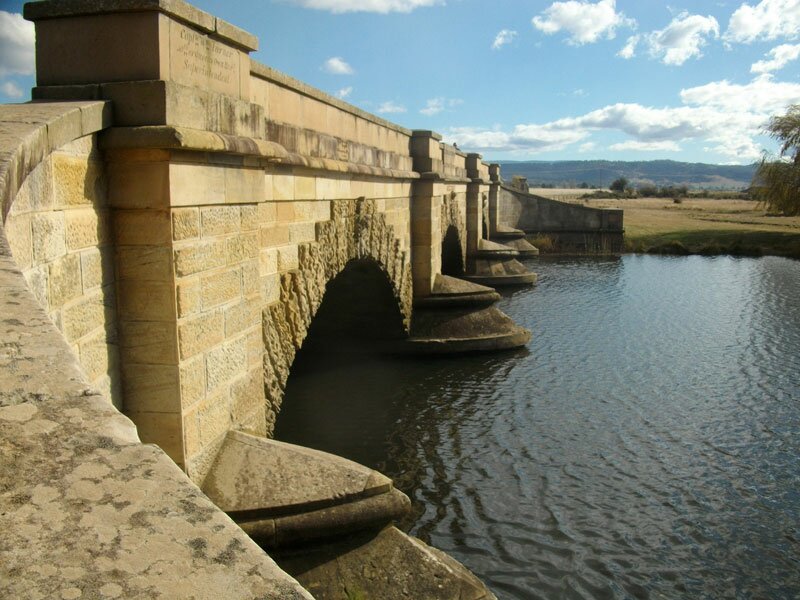 Four years in construction and built of stone quarried locally by convicts and completed in 1836, Ross Bridge, across the Macquarie river at Ross, is unquestionably one of the most picturesque and unusual bridges in Australia. The bridge's ornate carvings are the work of Englishman Daniel Herbert, who came to Van Diemen's Land a convicted highway robber. He died here a free man - he was buried in the local cemetery on a hill not far from the bridge - and he would have thanked Ross Bridge, for it was his work on its construction that gained him a pardon and his release from a chain gang. James Colbeck, another stonemason who worked alongside Herbert, also received a pardon for his work on the bridge. 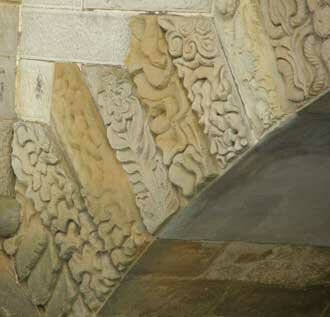 The bridge was designed by the Government Architect, John Lee Archer, as a replacement for an earlier wooden structure that had fallen into disrepair. Archer's plan was for a freestone bridge built for "beauty and durability". His design was for a solid stone structure with three symmetrical arches. a curved stone staircase at each end of the bridge goes down to the river, and chain linked stone pillars lead to the bridge on both sides of the road at each end of the bridge.

Tourists from all over the world come to photograph the bridge and marvel at the sandstone panels, with its 186 carvings consisting of abstractions of shapes - animals, birds, insects, plants, Celtic God and Goddesses, and heads of friends and foe, including the Governor of day, George Arthur. The fine craftsmanship of the Ross Bridge is a unique colonial legacy, cast in locally quarried sandstone. 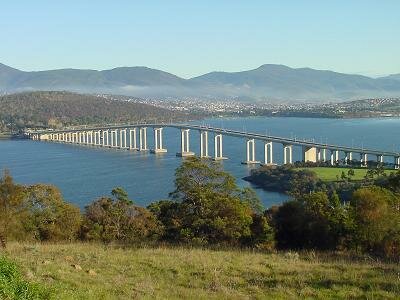 Tasman Bridge links the city of Hobart to the suburbs on the eastern shores of the River Derwent. It replaced the original crossing across the Derwent River, which was was a unique floating bridge which was opened in 1943.

Construction commenced in May,1960 and the bridge was first opened to traffic (2 lanes only) on 18th August, 1964. By 23rd December, all four lanes became operational. The first ship to pass under bridge, Galway, did so on 18th August 1964. During peak construction a labour force of over 400 men was employed on site. The total cost of the new Tasman Bridge together with approach roads and Lindisfarne interchange was in the order of 7 million pounds.

On the evening of Sunday, 5th January, 1975 at 9.27 pm, the bulk ore carrier "SS Lake Illawarra" loaded with zinc concentrate, drifted out of the main navigation lane and collided with the Tasman Bridge. Two piers collapsed along with 127 metres of decking. It was drizzling and after dark, so visibility was poor. Bridge traffic kept coming over the rise in the bridge and hurtling into the river below. One driver became aware of the collapsed span. He stopped his car and tried to warn others, but most of them took no notice and kept going to their deaths. Four cars ran over the gap into the Derwent, five occupants died, while several others managed to escape from their vehicles which were hanging on the edge of the gap. Seven crewmen from the "SS Lake Illawarra" also lost their lives.

The impact of the bridge collapse was quickly felt as Hobart was suddenly cut in two. Eastern shore residents were severely compromised, transport facilities were tested and to compound the issue further, most hospitals, schools, businesses and government offices were located on the western shore. By the next day, three private ferries and a government vessel were in operation. Health services also needed to be addressed and within four months most of the essential services needed by Clarence residents had been provided.

The Bridge took about two years to re-build at a cost of approximately $44 million, which was around three times its initial cost thanks to inflation. Engineers decided not to replace pier 19 as there is too much debris on the site, and so only one pier was replaced and two spans of the three spans that were brought down in the collision were replaced by a single, new span. The Tasman Bridge was officially re-opened to the public on Saturday 8th October, 1977. 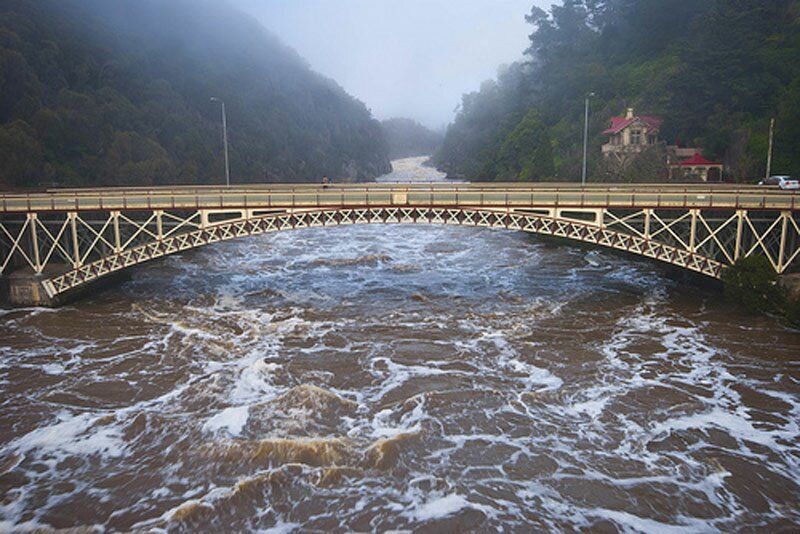 Built to carry main road traffic north from Launceston to the town on the coasts of Bass Strait, the bridge is now protected from heavy West Tamar traffic by the newer adjoining Paterson Bridge, which was brought into service in the 1960s. Kings Bridge is now reserved for local traffic only. 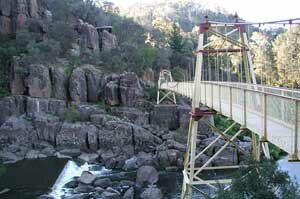 Part of the bridge's appeal is that it is the perfect terminating element to the renowned Launceston Gorge within the Trevallyn State Reserve. The reserve is bounded by the South Esk River on all but the northern side. In the east is the Trevallyn Lake, formed by the Trevallyn Dam, and in the east is Cataract Gorge.

Alexandra Suspension Bridge is located at the First Basin of Cataract Gorge near Launceston. The footbridge above the at-times savage ravine of the South Esk River is the work of Launceston chief engineer Charles St John David. It was completed in 1904. 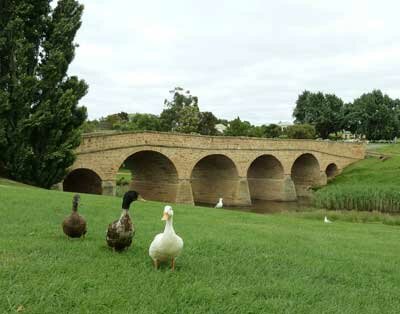 Richmond in southern Tasmania is home to many buildings and structures built by convicts under the most appalling conditions. One such structure, the Coal River Bridge was completed in 1825, making it the oldest surviving freestone bridge in Australia.

Initially Richmond Bridge, although larger, was identical in line and design to Stourhead Bridge at the Stourhead Gardens in Wiltshire, England, which Wilson copied. Subsequent modifications were made to its pier foundations due to settlement within a few years of construction. Later again, around 1835, changes were made to the townside upper walls, raising the inclined wall to become horizontal in order to take the degree of slope out of the roadway, and to improve safety at the bridge entry point. The eastern end remains as it was.

In 1885, as a result of flood damage, other changes in the form of bulky (and rather unattractive) buttresses were attached to the three mid stream piers. These were required to further protect the piers and foundations against water damage during times of heavy rainfall and flooding. 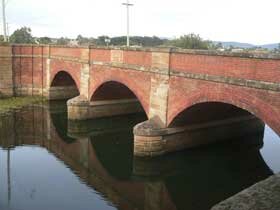 It is said to have been designed by James Blackburn, architect to Melbourne and a convict himself. It was constructed of 1,250,000 hand-made bricks on dry land, and after its completion the river was diverted to flow under the bridge. Built to a European design it has needed very little repair work over the years.

At one end stands the former Campbell Town Inn which was the town's first brick building, at the other end, Bridge Street, which was originally the main street. The Red Bridge is registered on the Register of the National Estate since 1978.

This bridge, alongside Bass Highway at Leith, was built in 1885, making it one of the oldest movable bridges in Australia. It is unusual for a movable bridge to be designed for railway use only. Most other movable bridges were either road bridges or combined road and rail bridges.

Completed in 1885, the bridge carries a single track railway on metal girders with spans 3 x 18.3, 2 x 12.8 (movable) and 3 x 18.3m, totalling 135.4 m. The ballasted deck is supported on deck-type metal plate girders throughout. Spans 2 and 3, and also 5 and 6 are continuous. The end spans are simply supported. All piers are of concrete and steel, the central pier being circular in plan to support the ring girder of the rotating span.

The bridge was seriously damaged by floodwaters and floating debris on 8th April 1929. Logs swept down the river damaged a pier, bringing down a fixed span of the bridge into the raging waters, though the rails and sleepers on the span remained intact. The cost of repairing the bridge was 17,000 pounds. The road bridge alongside the rail bridge sustained minimal damage in the flood. 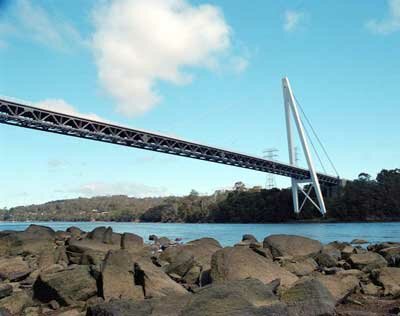 The Batman Bridge near Sidmouth, Tasmania, is several kilometres downstream from Launceston and crosses the Tamar River. It is a cable stayed bridge with a leaning 97.6m "A" frame tower founded on the western bank.

The main span is supported by three sets of stays strung from the top of the tower at 48m centres. The tower, including the cross beam and cross bracing, is made of welded steel box sections. The roadway is supported by orthotropic steel decking with a two inch mastic asphalt surface above it. The decking is made of sections 10.4m wide and 3.4m long welded together to form a continuous length. The main reason for choosing the steel decking is to keep the overall weight down. Steel decking is decidedly lighter than concrete decking with an equivalent in strength. On a down side though, the steel decking required an unusually large amount of erection welding which is time consuming and expensive. 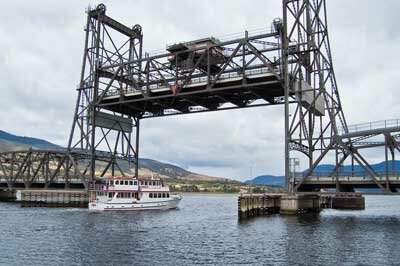 The Bridgewater Bridge and Causeway spans the Derwent River between Bridgewater and Granton to the north of Hobart. It consists of a vertical lift bridge and a specially-built causeway connecting the bridge to the east bank of the river. A bridge here was one of the first bridges constructed in Tasmania following British settlement in 1803, and gave its name to the nearby suburb of Bridgewater, Hobart. Lieutenant-Governor George Arthur commissioned the construction of the bridge and causeway as part of the Launceston-Hobart Trunk Road, linking both Tasmanian towns and providing easier access to farmlands in the interior of Tasmania.

Construction commenced on the bridge in 1829. The causeway, which was constructed first, was built by a workforce of 200 convicts who had been condemned to secondary punishment. These convicts, using nothing but wheelbarrows, shovels and picks and sheer muscle power, shifted 2 million tonnes (2,200,000 short tons) of soil, stones and clay. 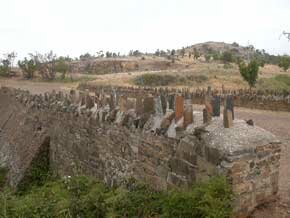 Spiky Bridge was built by a convict road gang in 1843 from fieldstones which were laid without mortar or cement. The parapet features fieldstones laid vertically which gives the bridge a spiky appearance. It has been claimed that the spikes were designed to prevent cattle falling over the sides.

It took the cunning and ingenuity of an Irishman to ensure that a notoriously difficult road on Tasmania's east coast was improved. Edward Shaw was a friend of Major de Gillern, then superintendent of the Rocky Hills Probation station. Tired of his requests to improve the road traversing the steep gully south of Waterloo Point, some 7.5 kilometres south of Swansea, Edward took matters into his own hands.

One night while driving the Major home he took the gully at full gallop making the journey somewhat uncomfortable for the Major. In no time a convict gang was assigned to build a bridge across the sharp dip.

This field stone bridge sppears to be dry stonework. Its side walls, being of random rubble, make it more a causeway with small arched culvert. It features stone buttresses on west side beside a central channel. The lower side of the west wall (sloping side) was strengthened during 1920's. The bridge parapets with large and small upright stones inspired the bridge's present name. The bridge is located on the Tasman Highway near Swansea. 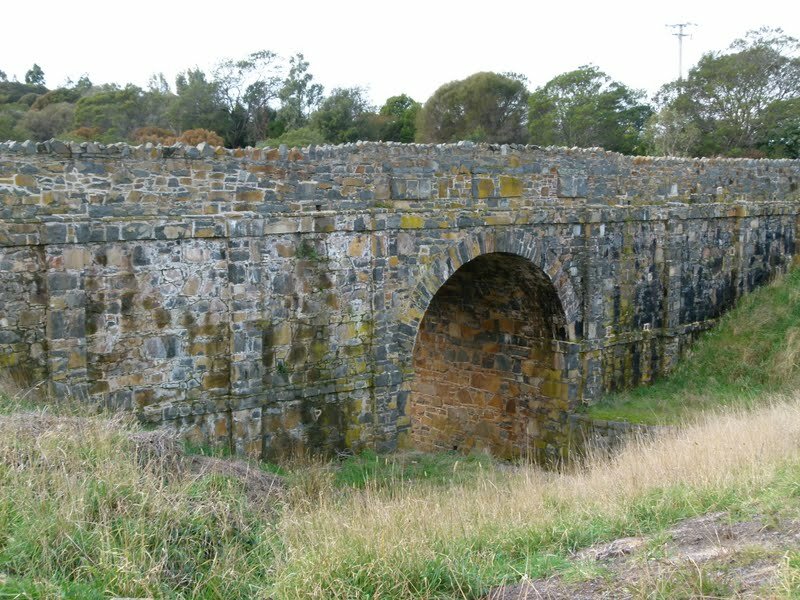 Kerry Lodge Bridge, also known as Strathroy Bridge and Jinglers Creek Bridge, is located on the former Midland Highway, some 9.6 km just south of Launceston. The convict built bridge was commenced in 1834; Lieutenant William Kenworthy was in charge on site.

Kerry Lodge Bridge, also known as Strathroy Bridge and Jinglers Creek Bridge, is located on the former Midland Highway, some 9.6 km just south of Launceston. The bridge was authorised by Lieutenant Governor Arthur, with work commencing in 1834. Lieutenant William Kenworthy was in charge on site, with John Lee Archer in overall charge in Hobart. Archer was also responsible for designing the magnificent Ross Bridge.

This bridge and causeway of bluestone masonry is a high single barrel vault across a deep gully. The massive facades are decorated with a colonnade of narrow pilasters, string courses and relief panels in the parapet walls. The copings are of random rough stones set on edge, unusual in Tasmania and particularly curious because at the time the bridge was built it was intended to have moulded freestone copings.