A charming and unspoilt historic Georgian village. Like Oatlands and Ross, Hamilton is still sufficiently removed from the over-commercialisation to offer the visitor an opportunity to experience what the villages of southern Tasmania were like in the 1830s and 1840s. It is the perfect place to stop, stretch one's legs and enjoy a tea or coffee breack on the journey from Hobart to the west coast.

74 km north west of Hobart on the Lyell Highway between New Norfolk and Queenstown. 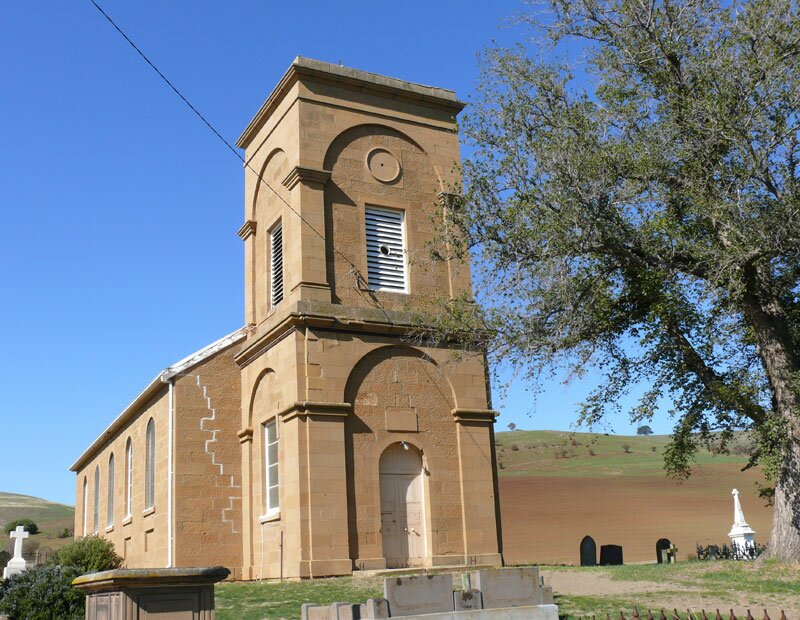 St Peter's Anglican Church: One of Australia's oldest churches (right), built c.1834 before the founding of Melbourne, when Van Diemen's land was in the Diocese of Calcutta, India.  It is thought that its single door was a means to prevent convicts from escaping during services.

McCauley's Cottage: A large cottage for its time, built around 1840 by the Church of England for clergy serving the district.  Privately owned since 1906, it now offers self contained historic accommodation.  It has an extensive rural vista , which includes St Peters' Church and Rectory.

Warder's Cottage: Built around 1840 and used by the Gaolers for accommodation (the gaol was behind the cottage) now used as the Heritage Centre and Museum by the Historical Society.  When not open keys are available at the Hamilton Inn or Glen Clyde House. 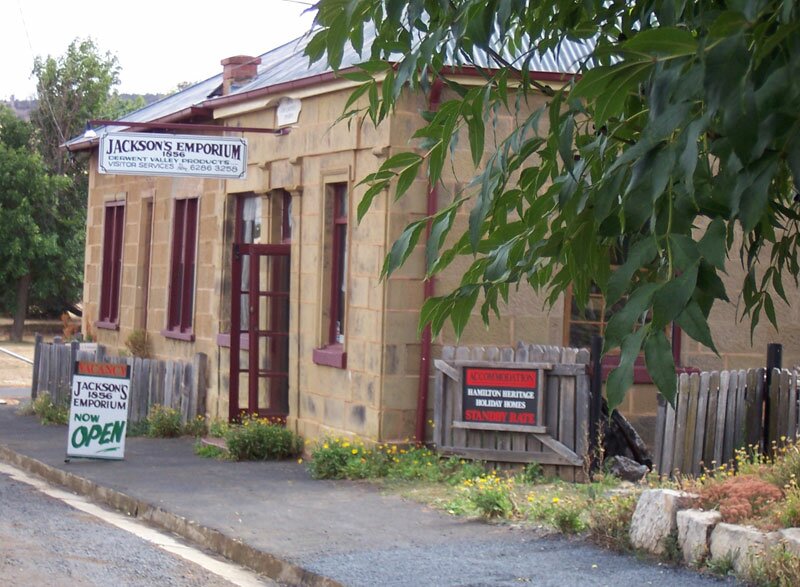 Jackson's Emporium: Built by James Jackson in 1845, this building was originally 2 storeys but it was damaged by fire in the 1930's and was reduced to a single storey.

Glen Clyde House: Convict built as a private home in 1840, it was licensed by James Jackson as a Coaching Inn in 1845 as the "Tasmanian Lass".  In the 1860's to the 1930's it was known as the Glen Clyde Hotel.  Renovations began in the 1970's and Glen Clyde is now a Multi-Award- winning craft gallery and tea rooms. Listed by the National Trust of Tasmania. 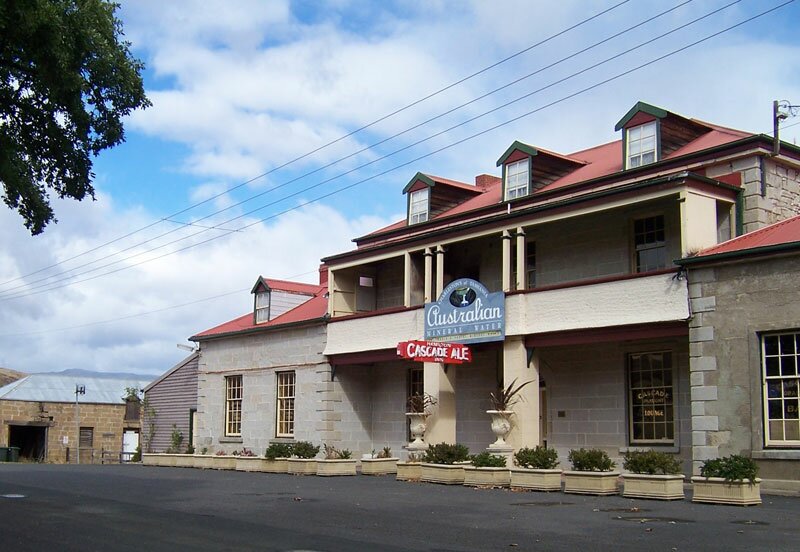 The Hamilton Inn: Built by William Roadknight and postmaster around 1830, as a shop and private residence it was first licensed in 1838 as the New Inn and is the only remaining licensed Hotel, providing ensuite accommodation and a-la-carte & counter meals.  A late discovery in 1994 of mineral water on this site, has the present owners producing  the world's purest drinking water.

The Old School House: Built in 1858 at a cost of £751 to accommodate eighty pupils, the School House is one of the most striking buildings in the Derwent Valley.  It has been saved from demolition in 1972 by action of the Hamilton Council and concerned residents, it has been extensively renovated for tourist accommodation.

Hamilton had its origins at a time when early European settlement of Van Diemen's land (Tasmania) had progressed from Hobart up the Derwent Valley. The first settlers arrived here shortly after New Norfolk was settled in 1807. A ford across the "Fat Doe River" probably led to the first settlement of the area then known as Sorell Plains, with the village first named Macquarie's Town, and later, Lower Clyde.
By 1828 there were a few weatherboard and sod cottages on the banks of the Clyde, whilst by the 1830s a visitor noted there were some thirty sly grog shops as one entered the town.  The name Hamilton had already been suggested for the settlement sometime in 1825 when, during a visit, Lt. Governor Arthur asked if Bothwell would not be suitable, being a Scot himself and dining with the mainly Scottish settlers. The "Fat Doe River" was renamed the Clyde and Hamilton and Bothwell chosen as names for the new settlements, both names recalling towns on the lower and upper Clyde in Scotland.
Occupying a strategic location in the development of roads and agriculture, Hamilton became the focal point of the transport of produce into and out of the district.  By 1832 there were sixty persons living in the settlement and surrounding landholders successfully petitioned for a police establishment as protection from marauding bushrangers and a spate of robberies.
By 1835 the district population had zoomed to 779, including 309 convicts and by 1837 the Police establishment had eleven petty constables and a flagellator (for whipping punishment).  With cheap convict labour it was during this period that many of the towns buildings (which still stand today)  and bridges were constructed.
By 1844 Hamilton was a bustling town, with two breweries, six or seven Inns, a blacksmith, stone quarries, mills, three agricultural implement makers and a large convict probation station; it held its own Races and Hunts, indeed development was so promising that the town was marked out as a major country town, in the style of an English town at the time, with squares, an esplanade, a Circus and Municipal Reserve.
A drive up onto the Hamilton Plains shows the roads laid out, and the decaying, dry stone walls are a reminder of the failed attempt by the mainly Irish settlers to farm the rich volcanic but dry soils of the plains. Nevertheless, Hamilton remained a bustling country town throughout the remainder of the 19th century, with the population peaking at 400 in 1881 and developments like the Langloh Coal mine to the northwest of the town in the late 1930s ensured its importance as a major rural centre.
Increasing mechanisation and improved road transport effectively put an end to Hamilton's growth.  Whilst sadly these factors led to Hamilton's decay and ultimate demolition of some notable buildings, many fine examples remain in the streetscape having an ambience redolent of our colonial history.  The result is a harmony and balance which is virtually unique even in Tasmania, renowned as it is for preservation of historic buildings. 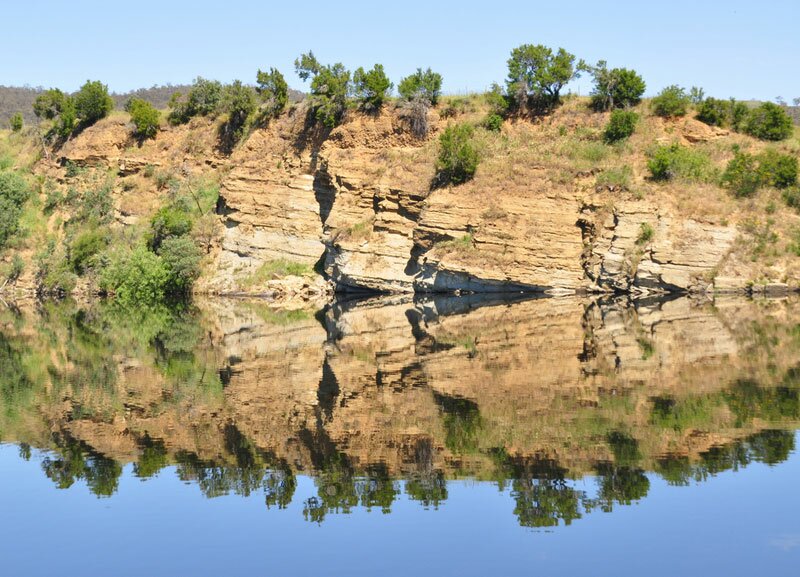 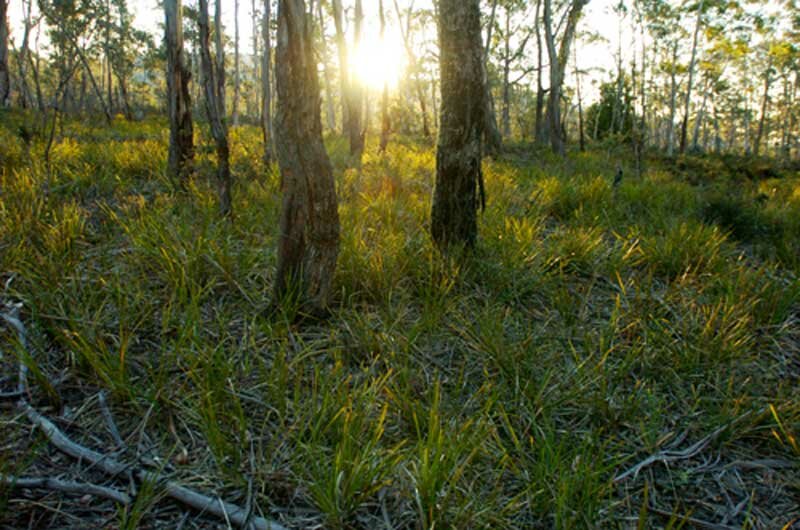 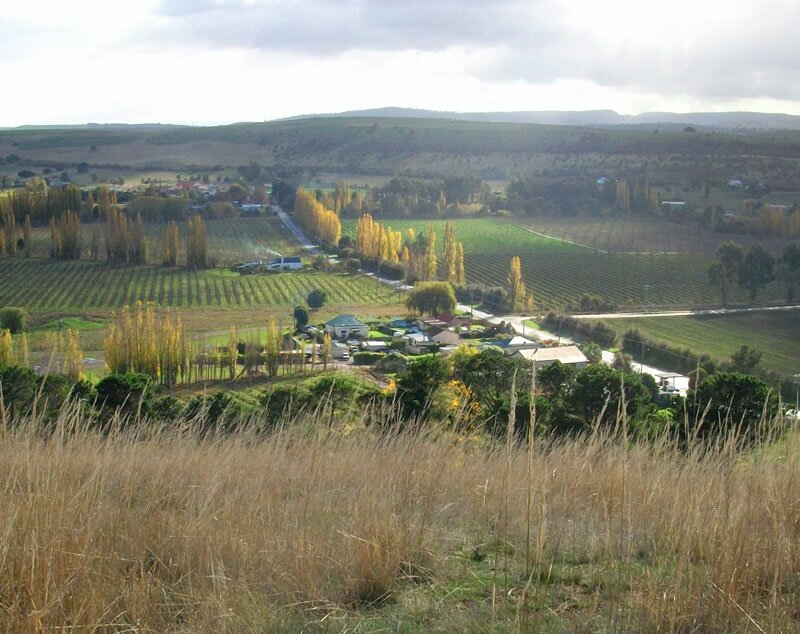 Bushy Park is a quaint town of old houses, deciduous trees, moral fervour, and hop fields which seem to envelop every building and road. The tall wooden and metal frames holding up the hop vines are broken by lines of Lombardy Poplars, with neat and unusually shaped oast houses scattered in the fields away from the road. 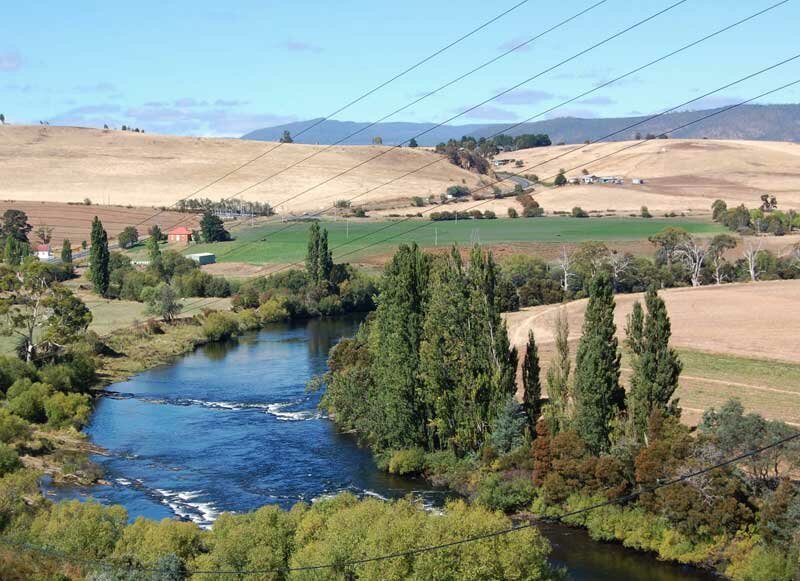 Ouse (15km north west): a small rural Central Highlands town on the Lyell Highway, situated on the junction with the Victoria Valley Road and on the banks of the Ouse River. Ouse is the settlement where convicts James Goodwin and Thomas Connolly broke out of the South West Wilderness four weeks after their escape from Sarah Island. Ouse Post Office opened on 1 October 1835. 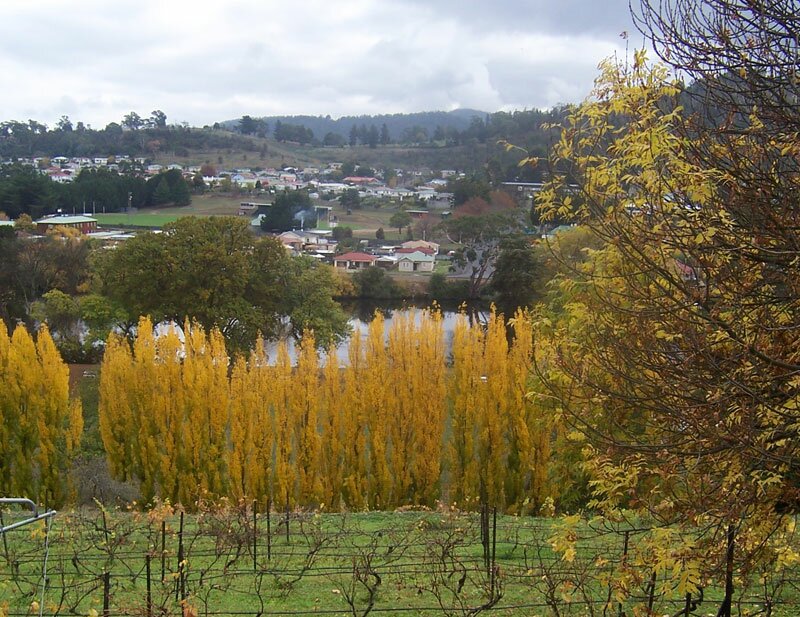 A picturesque Georgian town (19km south east) set idylically on the banks of the River Derwent. New Norfolk is centrally located and is a perfect base from which to explore the surrounding areas. Mount Field National Park with its rugged beauty and seclusion is only 30 minutes away. New Norfolk is a recommended day trip destination from Hobart. The stretch of Lyell Highway between Bridgewater and New Norfolk is particulary pretty, especially in the early morning with the river is calm and the reflection on the water of the hills is mirror-like. Mt Field National Park (16km west) is one of Tasmania’s most loved national parks. The park has a wide variety of scenic features and wildlife and offers a great range of facilities for day visitors. Few other national parks in Australia offer such a diversity in vegetation, ranging from tall swamp gum forests and massive tree ferns at the base of the mountain, through rainforest along the Lake Dobson Road, to alpine vegetation at the higher elevations.

A town of just under 1,000 people, situated in the Derwent Valley a few kilometres north of new Norfolk. It consists mainly of dwelling houses and farmland. Accommodation is also available as the area is popular with tourists. Notable features of Magra itself include the surrounding hills and the plantation of Lombardy Poplars. In the graveyard of the Methodist Church at Magra (22km south east) is the grave of Betty King, the first white woman to set foot on Australian soil. 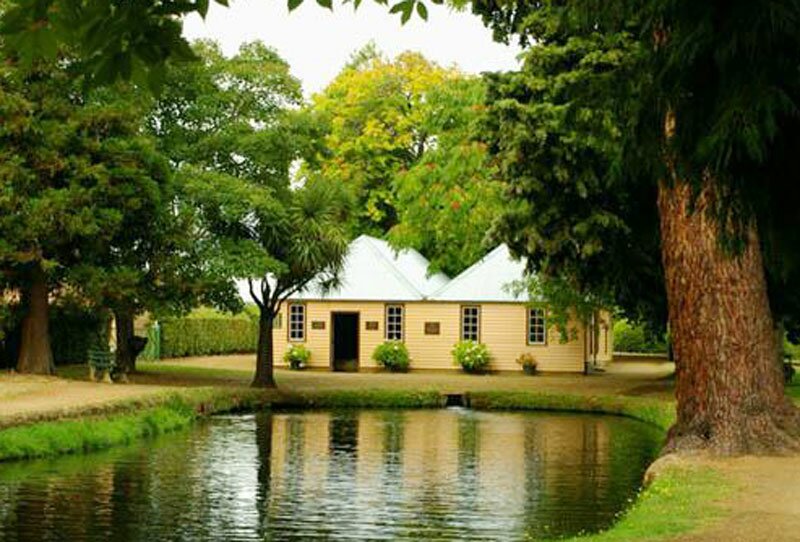 Plenty (11km south east), situated on the main road between New Norfolk and Bushy Park, is a small village, formely a location of hop growing. Plenty Salmon Ponds is the oldest trout hatchery in the Southern Hemisphere - in operation since 1864. It includes Museum of Trout Fishing and Hall of Fame.