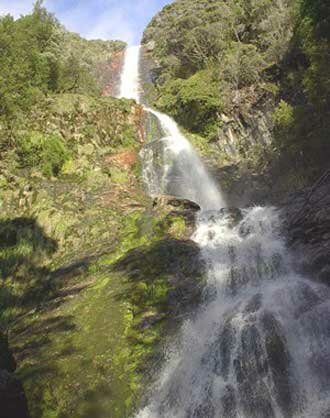 The path of a former tramway in Tasmania's central west, has been turned into a walking trail, which gives access to the 105m high Montezuma Falls, the tallest in Tasmania. The falls are accessed by a raised timber walkway which leads to the suspension bridge. The falls may be viewed from a lookout at the start of the bridge.
Location: Williamford Road, via Rosebery, Tas. 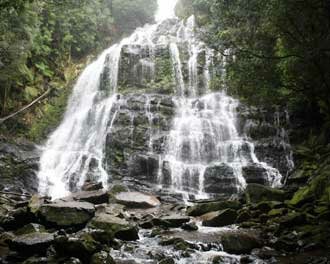 An attractive 30m waterfall that is perfectly shaped like an upside down wine glass. There is a pleasant 20-minute return walk to the falls through the forest of the Franklin-Gordon Wild Rivers National Park in the Tasmanian Wilderness.
Location: off Lyell Highway between Derwent Bridge and Queenstown. 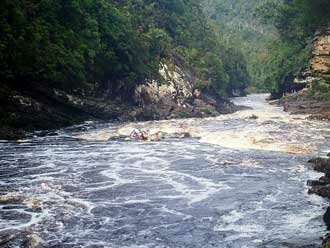 On the Franklin River in the spectacular Propsting Gorge known for its waterfalls, rainforest, rapids, deep pools of dark water surrounded by luxuriant rainforest and spectacular overhanging cliffs. These features are a contrast to the pebble beaches and majestic forests that are experienced in the lower reaches of the River. Access to the area is generally by raft.
Location: Franklin-Gordon Wild Rivers National Park in the Tasmanian Wilderness. 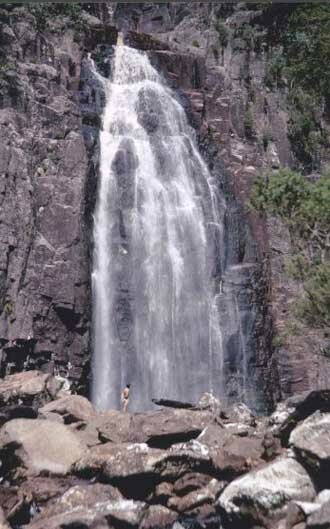 Heemskirk Falls are on the Heemskirk River, north of Zeehan, at the junction of Heemskirk and Pieman Rivers. The falls are visible on the side of Mt. Heemskirk from the main road.
Location: 19km from Zeehan, Tas. 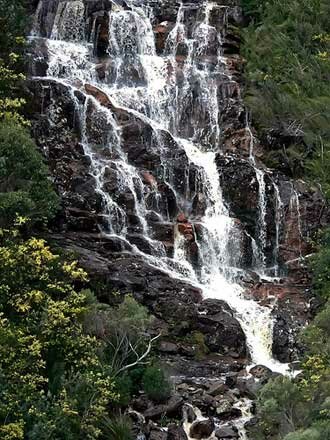 These falls are near a coastal walking track near Trial Harbour on the west coast of Tasmania. 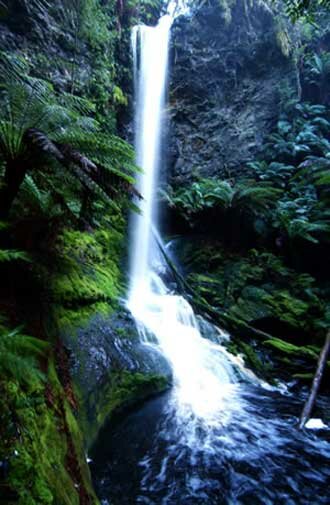 These 30m vertical drop falls are situated 200m along a timber boardwalk, that follows Amelia Creek from the Pieman River jetty; a wonderful place to appreciate huon pine, sassafras, myrtle and fern groves. Witness the spectacular glow worm displays at night. Due to the remoteness of the falls, access is only possible by canoe or kayak, which can be hired at Corinna. There are also approximately 40 unnamed, hidden waterfalls along the Pieman River, from the Reece Dam to the sea.
Location: Amelia Creek. 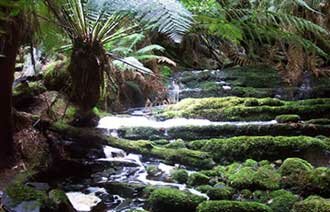 During the rainy season water cascades rapidly over the falls, but during drier periods, capacity drops and the rock formation is clearly visible. To see these small, but fascinating horizontal falls, book ahead and join a river cruise.
Location: Warra Falls is on Warra Creek, a tributary of the Arthur River, 12 kilometres upstream from the township of Warra. Accessibility to the falls is provided by the track from Warra Landing. 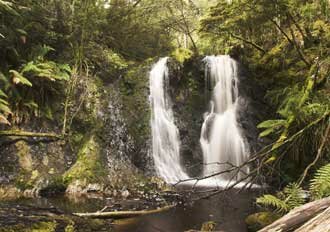 Hogarth Falls is nestled in the People's Park in the south-west coastal town of Strahan. The waterfall is about 15 metres high in total, however the main section of the falls visible from the park is 8 metres. It's an easy 2.5km round trip to the falls.
Location: People's Park via The Esplanade, Strahan, Tas. 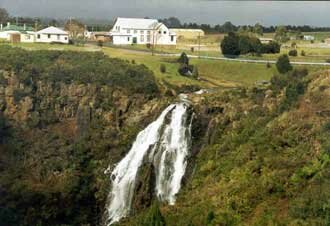 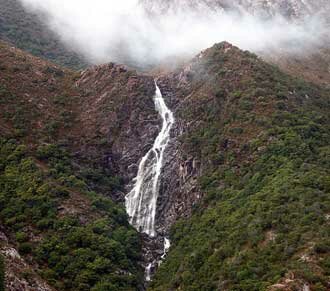 A seasonal waterfall on Mt. Owen the way into the mining town of Queenstown from Hobart. The falls are named because of their shape; they have also been known under the names Queenstown Falls and Angel Falls.
Location: near Gormanston, Tas. 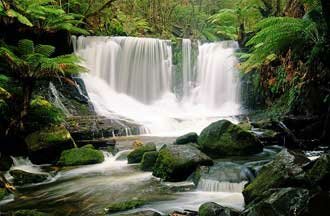 Access is via a well-developed track that ascends past the top Russell Falls. It is also within the Tasmanian Wilderness World Heritage Area.
Location: Mt. Field National Park, Tas, off Gordon River Road. 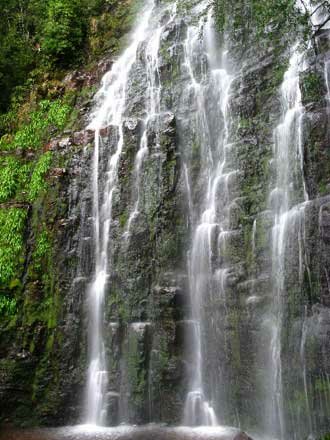 A very high waterfall, situated in the vicinity of Hastings Caves. Access to the falls is via a much overgrown logging road through the forest. Allow 3-4 hours walk from the car park and back.
Location: off Chesterman Rd near Hastings, Tas 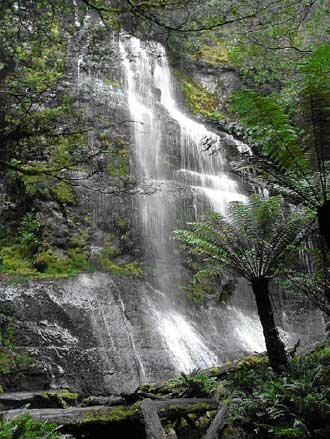 Situated close to the Mt. Field National Park, Marriott's Falls probably receive few visitors due to the fame of Russell Falls and others within the park. However they are well worth a visit and can be accessed along a well constructed track. The falls make for an impressive site, surrounded by fallen logs, ferns and rainforest trees.
Location: near Tyenna, Tas. 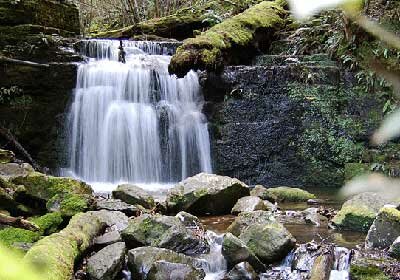 One of the closest waterfalls to the City of Hobart, Strickland Falls are in the foothills of Mt Wellington. Hobart Rivulet, which was the early settlement's main water source, flows over the falls. The Rivulet now flows underneath the city of Hobart into the River Derwent. 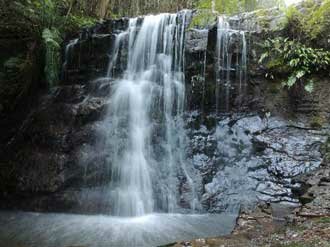 Fern Tree Bower, in Wellington Park near Hobart, was a popular picnic spot from the 1860s to the 1930s. A short climb uphill from here along the shady Pipeline Track brings you to the charming cascade of Silver Falls. 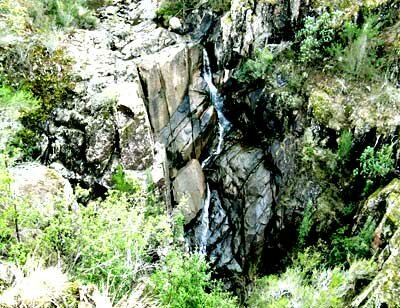 Bagdad Rivulet flows over Barren Rock Falls, which are located near Dysart. The falls are situated beyond the end of Harbach Road, off Midland Highway north of the village of Bagdad. 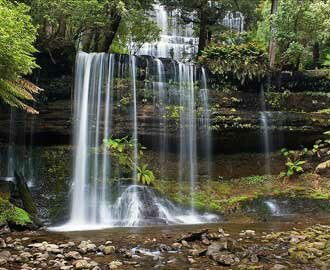 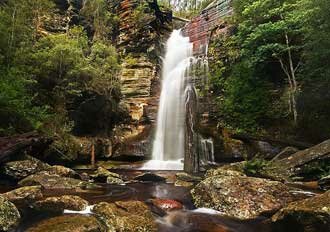 A pretty 25-30m high waterfall, accessed via a walking track. Allow an hour for the return walk to the falls.
Location: off Snug Tiers Rd, Snug, Tas. 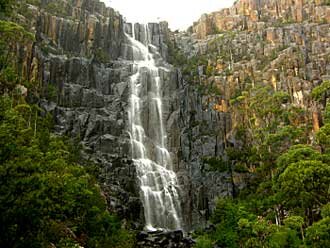 A visually impressive falls that plunges straight off the top of a 114m high cliff. The falls is at the end of the Pelverata Falls Trail, and can been seen from a viewing platform.
Location: near Pelverata, Tas. 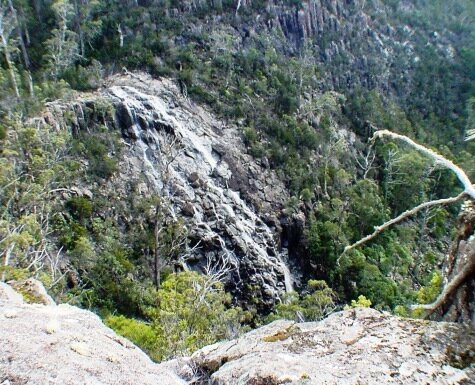 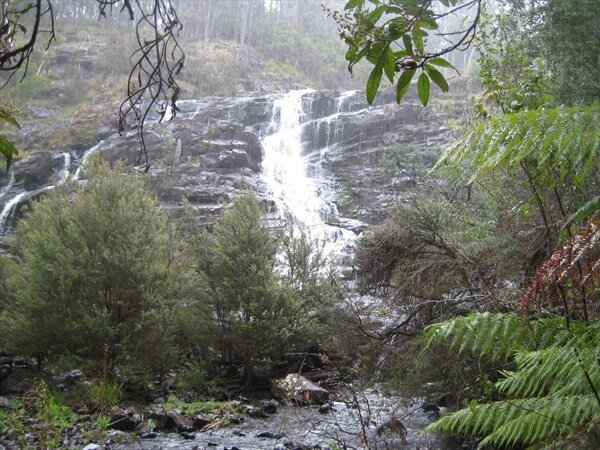 These falls are known to few people who have not walked the Tasmanian Trail. The watercourse that flows over them is Kenmere Creek.
Location: off Bashan Road, Victoria Valley, near Ouse, Tas. 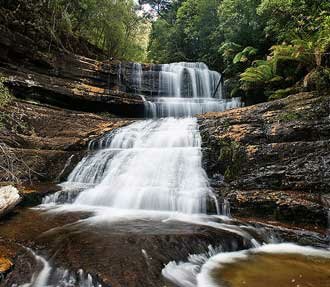 A lesser known falls in the vicinity of Russell Falls. The easiest access is by driving past the Russell Falls Visitor Centre and going up the unsealed Lake Dobson Road towards the car park for the Tall Trees Walk.
Location: Mt. Field National Park, Tas, off Gordon River Road. 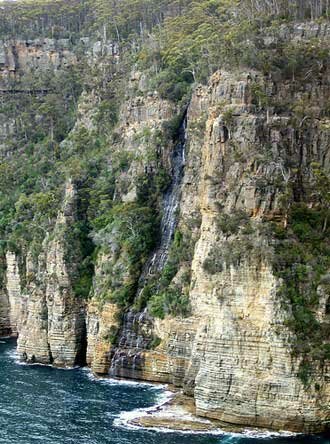 The cliff height on the south east corner of Tasmania averages 250 metres for all but Pirates and Fortescue Bays from Tasman Island at the south tip of the Tasman Peninsula to almost Dunalley at the top of the Forestier Peninsula. These falls begin at the top of these cliffs and cascades down the rock face into the ocean. The falls are visible from the clifftop waking trail, but the best way to see them is on a coastal cruise out of Pirates Bay.
Location: Tasman Peninsula near Eaglehawk Neck, Tas.