The 85 km Gordon River Road is the major man made intrusion into the area of World Heritage Wilderness area of south west Tasmania, and with the Scott Peak Dam Road is the only road into the region. It is the main means of access for tourists and other transport to view the dams from the Lake Pedder damming, apart from flying over the region. It is one of Australia's most awesome road trips.

South west of Tasmania, from Hobart

85 km one way. Return by Gordon River Road as there is no alternative route 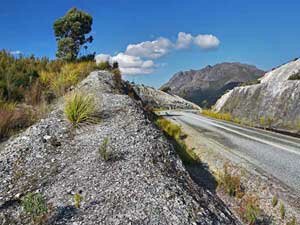 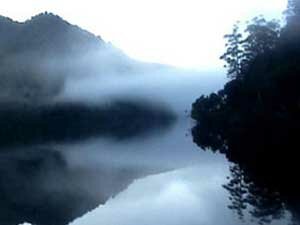 Gordon River Road commences just west of the township of Maydena and travels in a general westerly direction, passing the headwaters of the Florentine River (to the north) and the Weld River to the south at a location known as Tim Shea (altitude 952 metres), which looks north and north east to the Mount Field National Park. It then turns south, and at Frodsham's Pass, Scotts Peak Dam Road continues south to the eastern shores of the modified Lake Pedder, then to Edgar Dam, and finally to Scotts Peak Dam.

Construction of the road, which began in January 1964, was financed by a Commonwealth grant of $5 million to the State for development of the South-West area including the hydro-electric potential of the Gordon River, the timber resources, possible mineral resources and the tourist potential of this part of Tasmania.

Apart from anything else, this road gives travellers a rare chance to see one of the most pristine wilderness areas in the world. The scenery, regardless of the clouds that sometimes obscure the view, is positively magnificent, with snow-covered mountains ahead and to either side for much of the journey. Though it takes you into the Southwest National Park and alongside Lake Gordon and Lake Pedder, from the road you see only a tiny portion of the 500 square kilometres they expand over, and the untouched wilderness that surrounds them.

Once upon a time, these lakes were a fraction of the size until the Gordon River Power Development created the largest freshwater storage in Australia and they now hold 27 times the volume of water in Sydney Harbour. Today, the Gordon Power Station provides around 13 per cent of Tasmania���s total power supply. 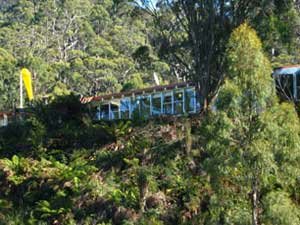 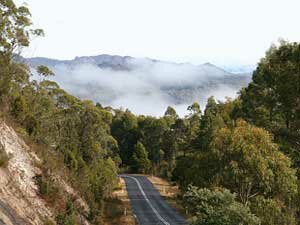 A permanent sign at the highest point of the Gordon River Road reports that the annual rainfall at that spot is 190 cm. It rains, literally, 300 days of the year in Strathgordon, the settlement at the end of the road.

Strathgordon was built in 1969 as a functional township of nearly 270 homes to house Hydro scheme builders and workers. At the peak of the Hydro scheme's construction there was a population of 2000. The village facilities included a complete shopping complex and a fully equipped school which had a peak enrolment of 230 students. A large heated indoor swimming pool was a feature of the school. Other village amenities included a church, police station, fire station, library and a well equipped sports centre. Staff were housed in a motel-style staff house and there were quarters for 640 single men with a central block containing a kitchen, mess and canteen. A mobile camp was established at Scotts Peak to accommodate 250 men.

In the year Strathgordon was built, it rained every day for six weeks over August and September and legend has it that when the sun eventually showed its bright face, the glare off the quartzite gravel of the area was so strong that the Hydro felt compelled to issue the village children with sunglasses for their outdoor playtime. 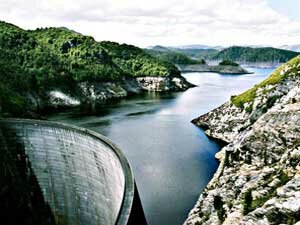 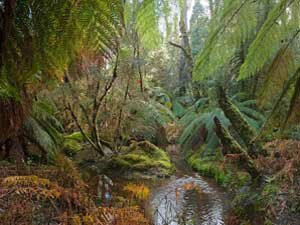 Strathgordon itself is 161km from Hobart. These days it is a far smaller community that it was when the dams were being built, its population is made up of mainly Hydro employees. Hydro Tasmania has developed the area for fishing, picnics, barbecues, camping and bushwalking. Gordon Dam is 12 km beyond Strathgordon. This 140 m high concrete arch dam on the Gordon River forms Lake Gordon with a surface area of 272 square kilometres. Three other dams, Edgar, Serpentine and Scotts Peak form Lake Pedder with a surface area of 242 square kilometres. Gordon Power Station, 183m underground, is designed for fully automatic remote control from Hobart 160 km away.

The Upper Florentine Valley is an intrinsic part of Tasmania���s South-West wilderness - one of the greatest temperate wilderness areas on Earth. The upper reaches of the Florentine are surrounded by the spectacular mountains of the Tasmanian Wilderness World Heritage Area. The valley floor is home to giant trees, rainforest and moorlands as well as outcropping limestone. This limestone is riddled with caves containing ancient Aboriginal heritage as well as the bones of extinct mega-marsupials.

The Upper Florentine Valley is visited by thousands of people on their way to Lake Pedder. From the Gordon River Road, people can walk through a spectacular part of the Upper Florentine en route to well-known peaks and lakes within the World Heritage Area. Lookouts on the road provide impressive views across a landscape of jagged quartzite mountains and thick forests. The Maydena Control Gate is run by the Lands, Parks and Wildlife Department and a nominal fee is charged for entry to the South-West National Park.