Upon arrival in Devonport after sailing overnight aboard the Sprit of Tasmania ferry from Melbourne, there's something magic about heading off along the coastal road from Devonport to Burnie and beyond just after sunrise with the road to yourself, and cows grazing on the lush green grass beside the shoreline. It's a great day's drive that will take you all the way to Marrawah on the west coast if you are so inclined, visiting the many coastal towns on Bass Strait along the way.

North west of Tasmania, from Devonport, Burnie or Launceston

Various, depending which segments of the drive are followed. The drive can be done in a day there are back if you leave early and are prepared to return to your starting point around sunset, but this is not recommended. There is so much to see in this corner of Tasmania, we recommended you allow a minimum of 2 days, but preferably up to a week. There is plenty of quality accommodation available at the many towns and cities on the route.

Coastal towns and scenery on the Bass Strait coast of north west Tasmania. This drive follows Bass Highway along the north west coast of Tasmania. There is no alternate route for the return journey; may we suggest you see the coastal features when travelling in one direction and the inland features in the other. Launceston to Devonport (100 km): travfel south from Launceston on Midland Highway as far as Prospect Vale, where you take the Bass Highway exit. An alternate route is to leave Launceston via West Tamar Road through the Tamar Valley. At Exeter, turn left on Frankford Road, following it to Devonport.

If travelling on Bass Highway, the first town you pass is Westbury, a classic Georgian village surrounded by hedgerows and lanes reminiscent of England. Westbury has numerous museums, housing collections of agricultural machinery, antique steam engines, vintage cars, 19th century toys and historic furniture. 17km further on is Deloraine, a delightful country town with plenty of colonial era buildings and a riverside park that is a beautiful spot for a picnic. Deloraine is a gateway to the Great Western Tiers region.

Elizabeth Town is a short distance from Deloraine. It is a food lovers delight. Sample cheeses at Ashgrove cheese factory then have a snack at the Bakery Cafe and spoil yourself silly with the delights on offer at the Christmas Hills Raspberry farm and Cafe. Before reaching Devonport, you pass Latrobe, an historic farming centre on the Mersey River. Latrobe was once an inland port serviced by ferries from Devonport. It is home to the House of Anvers chocolate factory, Australian Axeman's Hall of Fame and the Big Platypus.

To many visitors to Tasmania, Devonport is primarily known as the port for the Spirit of Tasmania car and passenger ferries which make daily 10-hour trips between Melbourne and Devonport. It makes a great base and starting point for exploring Tasmania's north west. 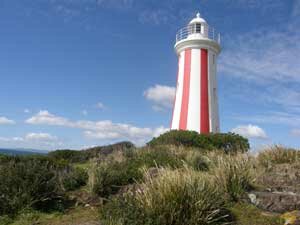 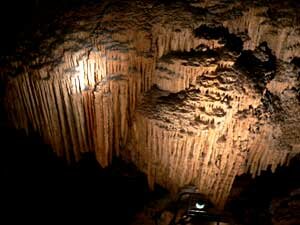 Devonport to Burnie (48 km): You are now travelling on one of the most pleasant oceranside roads in the country. Lillico Beach is home to a penguin colony, and you can watch them scamper up the beach at night.

Ulverstone, Tasmania's largest town and a service centre of the district, lies at the mouth of the Leven River. Head inland and experience a tour of The Gunns Plains Caves, which operate regularly. The limestone caves have an underground creek, and occasionally lobsters and other wildlife can be found. Preston Falls is a short 15 minute drive from Ulverstone via the Gunns Plains road. The 25m high waterfall plunges over an alcove into the shady depths of the gorge. A short walk down steps to the overlooking platform, takes less than 5 minutes.

The small offshore islands known as The Three Sisters are home to a huge variety of bird life. Goat Island to their east is accessible at low tide - but be very careful not to get stranded.

Penguin is home to Tasmania's largest undercover market (every Sunday). Behind the town, you will find the Dial Range which has several walking tracks to the mountain-tops with stunning views over Penguin and the north-west coast. Situated on Emu Bay at the mouth of the Emu River, Burnie is Tasmania's third largest city and port for the rich agricultural and mineral mining activities of the region. It makes a great base for exploring the region due to its central position and extensive facilties. 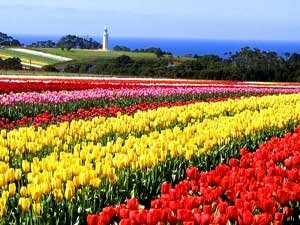 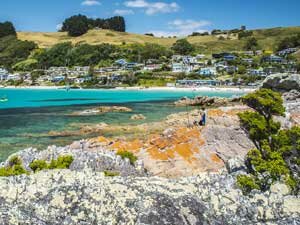 Burnie to Stanley (78 km): Guide Falls is a popular picnic area just south of Burnie is at Guide Falls near Ridgley. There is an easy walking track to the base of the falls a few hundred metres upstream.�� The road continues to the top of the falls where there is a viewing platform.

Wynyard is a centre of agriculture and sits on the banks of the Inglis River sheltered by the flat-topped and fertile extinct volcano core that is Table Cape. During spring the town comes alive with blooming tulips and festivities. On the road between Table Cape and Wynyard is Fossil Bluff where fossils can be seen in the rocks at low tide. Australia's oldest marsupial fossil was found at Fossil Bluff.

Boat Harbour Beach may well be the most beautiful village and beach on the whole north coast of Tasmania. It tumbles down the side of a gentle hill to a superb white beach with rocky headlands on either side. The sea is green and blue, the beach so clean, the village is sleepy and peaceful.

Detention Falls, at the end of a 10 minute bushland walk, has an excellent viewing platform high above the river. The picturesque falls are at full capacity in winter. The turnoff is between Boat Harbour and Rocky Cape. Rocky Cape National Park features gorgeous coastal scenery with jagged islets, reefs and headlands pitted with water-worn caves. Ancient Aboriginal feeding sites can be seen in two caves open to the public. 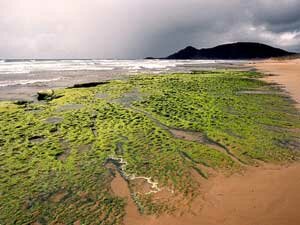 Stanley to Marrawah (69 km): Sheltering on the leeward side of Circular Head, the village of Stanley is a picturesque cray and shark fishing settlement that seems to belong in a previous era, but has somehow managed to defy the march of time and progress and make it into the 21st century relatively intact. There is a chairlift up to the top of The Nut; the view is spectacular. Nearby is the pioneer settlement of Highfield.

Dip falls, to the south of Stanley, are two tiered falls on the Dip River at Mawbanna. The picnic and barbecue area is located right on the river where visitors can take the stepped path down to the base of the falls to observe the unique rock formations.

Smithton is the major industrial and administrative centre for Circular Head, and an ideal base for exploring the north-west. From Smithton, you can visit Tarkine Forest Adventures at Dismal Swamp. At this sunken blackwood forest you can slide down a tube to the forest floor or take a stroll or buggy ride down to the fertile swamp below. Allendale Gardens, also to the south of Smithton, are beautifully landscaped gardens located next to temperate rainforest in Tasmania���s far north-west. Trowutta Caves and Arch are further south. Trowutta Arch was formed by the collapse of a cave.

Tasmania's westernmost community, Marrawah is the most popular surfing spot in Tasmania's north. The small town services the rich farming and dairy country that surrounds it. The major attractions in the area include walks along the coastline, the important Aboriginal carvings at Mt Cameron West and Sundown Point, and cruises along the beautiful reaches of the Arthur River. If you have the time, the short drive south from Marrawah to the township of Arthur River will give you a taste of the Tarkine wilderness coast. 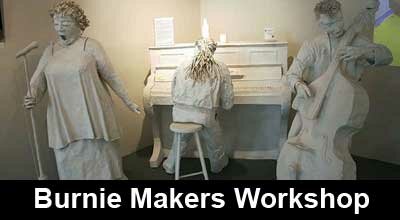