The village of Conara used to be one of the iconic towns, though very few knew its name. Whilst driving along the old Midlands Highway from the south, The Disappearing House at Conara would one moment be in sight, then, the next moment, disappear behind a hill. Unfortunately these days trees can block the view. This historic building has been known by many names, but today is called Smithvale. It was a staging stop for the coaches from Launceston to Hobart and the stables which were behind the house housed the change of horses. 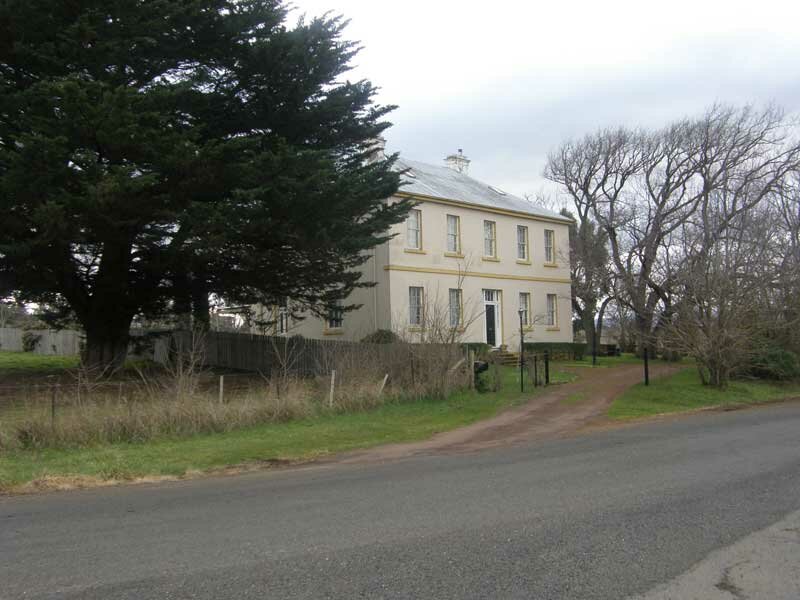 Today, Conara is little more than a scant number of houses around a railway junction. The name ‘The Corners’, by which the settlement was first known, originated because it lies on the old intersection of the coach road between Hobart Town and Launceston and the coach road from Swansea passing through Avoca in the Fingal Valley.

Eventually, the construction of the Fingal Rail Line in 1886 met the Main Line Railway (Hobart—Launceston) at The Corners and was primarily built to convey coal from the Cornwall and Mt. Nicholas mines near St. Marys, a practice that has continued for well over 100 years. Conara railway station was used for passengers changing trains from the Main Line (Hobart -Launceston) to the East Coast, via the Fingal Line. Conara is the aboriginal word for coal, or coal dust, no doubt taken from the major type of material that passed through the town by train.

As part of the original land grant to James and Catherine Smith, the future site of Conara went by the name of Willis’ Corner, or more colloquially, ‘Humphrey’s Waterhole’, until it was requested of Smith to construct an Inn to provide overnight hospitality to travellers on the coach routes, when it became known simply as The Corners. Built in 1839-40 by the Smiths, The Corners Inn has since been known by many different names, including the Epping Banks Inn, Cleveland Inn, the Corners Inn and now Smithvale, but is most often referred to simply as The Disappearing House. Anyone journeying northward from Hobart on the old highway was often surprised by the optical illusion of the old inn sinking below the line of a small hill the closer one approached it. Conara was by-passed by the Midlands Highway in 1969, and as a result the Disappearing House has all but disappeared for travellers on the current highway.