Binalong Bay is a small coastal town in north-east Tasmania, situated at the southern end of the Bay of Fires. Originally a fishing hamlet, the town is now a village with a large proportion of holiday dwellings.  Noted for its rock and surf fishing, it is here that visitors first see the bay’s large expanse of untouched coastline, lined with clean, white beaches punctuated by picturesque granite outcrops covered in orange lichen. With an array of accommodation, fishing and diving facilities, and a general store and cafe, Binalong Bay is an idyllic location for those seeking a ‘holiday in heaven’ and an ideal starting point for walks along the coastline.

The township marks the southern extremity of the Bay of Fires, an iconic 29-kilometre stretch of coastline renowned for its giant granite boulders covered in orange lichen, not to mention its white sandy beaches (they are often named among the best beaches in the world). This whole coast is popular with divers because of its kelp forests and underwater caves. 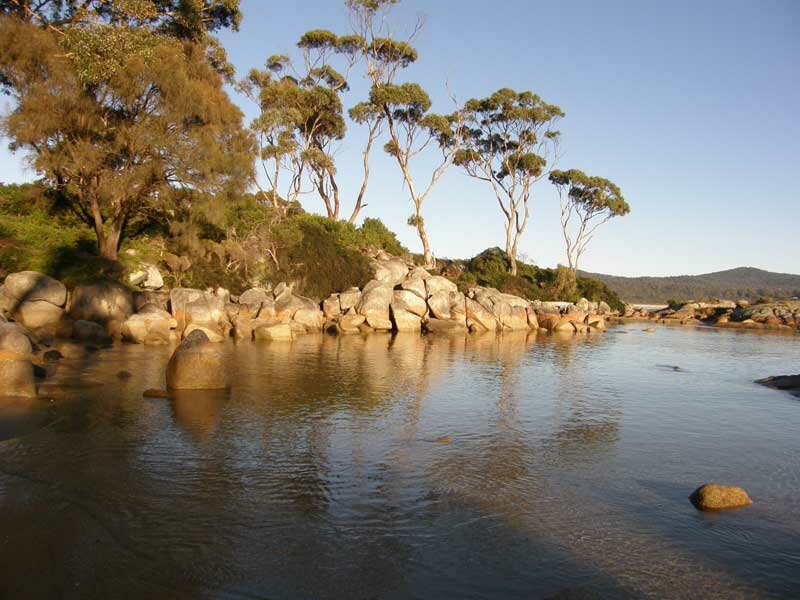 The Gardens is a picturesque area to the north of Binalong Bay, named by Lady Jane Franklin, the wife of Governor John Franklin, who spent some time in the region. If your visit to the area is a brief one, the drive along the coast to The Gardens from Binalong Bay is recommended. Along the way are Jenneret Beach, Swimcart Beach, Cosy Corner and Sloop Point, all of which give access to the beach; some have camping facilities. Cosy Corner and Sloop Point have some great photo opportunities.

Travel north from Binalong Bay along a very corrugated dirt road and you will eventually reach Mt William National Park and Eddystone Point, where there is a lighthouse and the oldest standing lighthouse keeper residences remaining in Tasmania. Inland from Eddystone Point is Little Blue Lake, the brightest and prettiest blue colour you’ll ever see. The lake has been formed due to early tin mining and the exposed white clay reflects the sky, giving the water its colour.