The magnificent mountain of Ben Lomond with its imposing and precipitous cliffs is visible over much of the northern midlands of Tasmania. The plateau is roughly 14 kilometres in length, 6 kilometres wide and is in excess of 1300 metres in height. A summit on the plateau named Legges Tor is the second highest point in Tasmania (1572 metres).

The Ben Lomond National Park is invaluable for the conservation of the flora communities and species diversity of Tasmania���s alpine areas. The area consists of an outstanding variety of glacial and periglacial features which are considered of national significance.

Ben Lomond National Park is dominated by an alpine plateau over 1500 metres high and surrounded on all sides by precipitous escarpments. The basement rocks comprise slates, siltstones, greywackes and quartzite. These were intruded by granite and, later, by dolerite during the Jurassic Period. Dolerite predominates on the plateau. The only exception is a highly localised area under Coalmine Crag and around the flanks of the Ben Lomond Plateau. This exposure includes a narrow coal sequence, which was once worked commercially.

The vegetation of Ben Lomond is different to other parts of Tasmania and, in the summer months, the alpine wildflowers are a delight.

Because of the decreasing area of natural habitat available in north-eastern Tasmania, the national park plays an invaluable role in regional wildlife conservation.��Of the larger mammals, Bennett���s wallabies and wombats are common, and are regularly seen in the ski village during summer and winter, even under blizzard conditions. Pademelons are abundant in the wet gullies and areas with thick undergrowth. Forester kangaroos have been recorded along the south-west edge of the park.

There are two cross country ski routes which are also used as walking routes. They are not formed trails but are marked by snow poles:

Carr Villa to Alpine Village:��This walk takes approximately 1.5 hours one way with steep gradients up the side of the plateau. The route takes you up onto the plateau and then along the plateau to the highest point.

Alpine Village to Little Hell:��This walk takes about 1.5 hours return. From the top of Little Hell there are views across the southern part of the plateau to Stacks Bluff.

Located 50km south-east of Launceston, Ben Lomond National Park is reached by back roads via White Hills or Evandale onto the Blessington Road (C401). About 3.5 km before Upper Blessington, turn right onto the Ben Lomond Road, the only road within the park. This road is unsealed, and between June and Septmber, the upper section of this road is subject to ice and snow. The park boundary is 8 kilometres from the turnoff and the alpine village is 18 kilometres. Along this road you will reach a camping area to the left, marked by a sign, and shortly after you will reach a Y-intersection. One kilometre to the right is Carr Villa, from where there are walking tracks which lead to the summit and the Ski Village (both 1.5 km).

If travelling to the mountain by car there are car parking facilities available. Whether you have a 2 or 4 wheel drive you MUST carry chains during the season. Fuel is not available on the mountain.

The Creek Inn on Ben Lomond operates a licensed restaurant and 6 accommodation units (one suitable for disabled). These are generally heavily booked when there are suitable weekend skiing conditions. Bookings for other tourist accommodation can also be made through the Creek Inn ��� for bookings and opening times please telephone 6390 6199.

There are several lodges in the alpine village area and these are owned either privately or by alpine clubs. Usage is generally restricted to members and their guests. 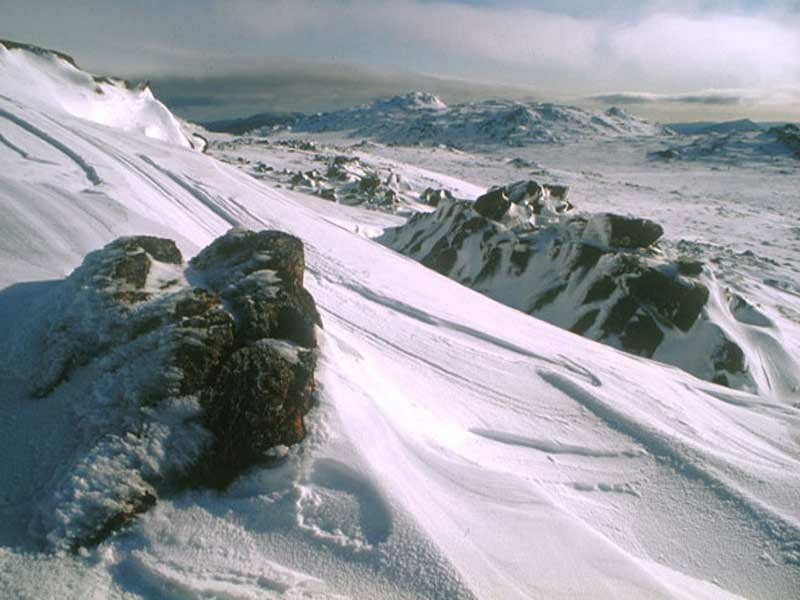 Ben Lomond National Park lays claim to being Tasmania���s premier ski resort. The ski village facilities are on the Ben Lomond plateau. The Village is set at the foot of the ski slopes and the ski runs are not as steep or fast as some of those in other resort, however the lack of crowds, the stunning scenery and the diverse wildlife make this a memorable alpine experience. Cross-country skiing and snowboarding are very popular. The Ski season opens in early June and closes in late September.

The Alpine Village is located at the foot of the of the ski slopes and there are toboggan and snow play areas, downhill and cross country skiing and snowboarding.

There are 3 T-bars and 4 Poma Lifts providing an affordable family friendly winter experience for the beginner to intermediate users. The winter season usually starts around the beginning of July and closes late September.

The Ski field Area is reached via the C401 from Launceston. Allow about 1 hour 20 minutes travel time from Launceston or allow 3.5 hours from Hobart via the Midlands Heritage Highway. The alpine village is 18 kilometres from the main road turnoff; the upper section of the road is subject to ice and snow. To that end vehicles are required to carry chains and fit them if directed. Chains are not available on the mountain but can be rented in Launceston at Autobarn (03 6334 5601) or��Skigia��in Hobart (03 6234 6688). If travelling to the mountain by car there are car parking facilities available. Whether you have a 2 or 4 wheel drive you MUST carry chains during the season. Fuel is not available on the mountain. 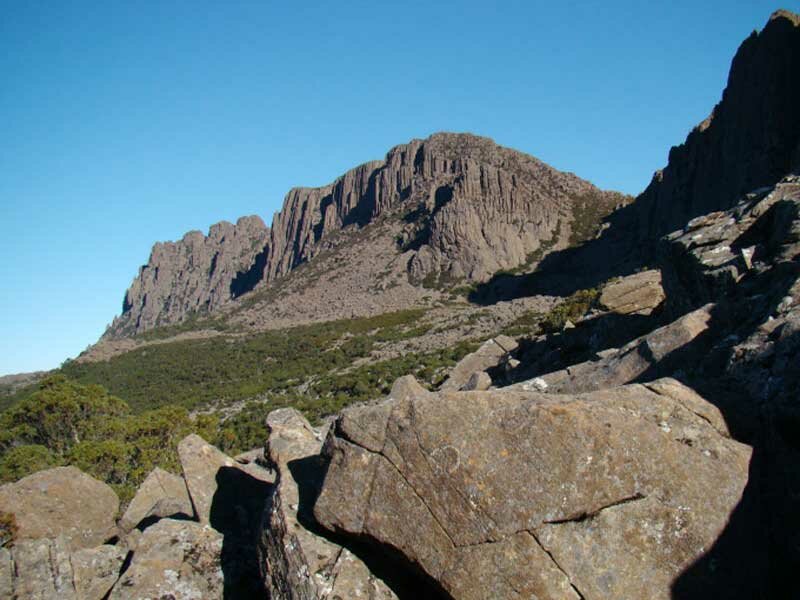 At 1,527 metres, this peak on the Ben Lomond Plateau at the southernmost end of the escarpment is the sixth highest point in Tasmania. A major feature of the Ben Lomond National Park, it is a popular venue with bushwalkers and mountain climbers. The volcanic dolerite cliffs of Stacks Bluff dominate the local landscape, and mark the southern boundary of the national park.
Access is from Storys Creek, where a sign-posted gravel track can be followed for 2.6 kilometres (you may need to park before reaching the end, as the track becomes rough).��Another sign indicates the start of the stone-marked (cairned) path. It���s a steep steady climb up through old Eucalyptus delegatensis (Alpine Ash) forest. The higher sections of the track traverse rock scree to reach the plateau. Enjoy extensive views as far as Freycinet Peninsular and Mt Wellington, as well as the wild and remote expanse of the alpine plateau. 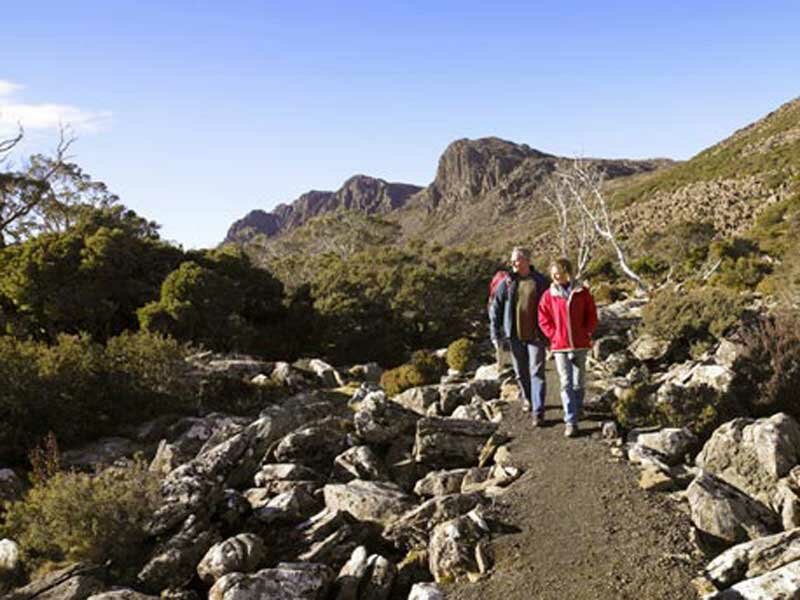 Legges Tor is not only the highest peak of Ben Lomond but the highest in Tasmania���s north. 64 km east of Launceston this is a surprisingly accessible walk and not too difficult for families. The walk follows a track which begins 1.5km beyond the top of Jacobs Ladder. Follow marker poles to the summit, which is marked by a cairn. Do not attempt this walk in bad weather. 2.5 km return walk.eld on Ben Lomond is Tasmania's only downhill skiing area which offers some of the facilities expected of a contemporary skifield.