Retaining the character of a Cornish fishing village of the last century, the inner Hobart suburb of Battery Point began life as a home for mariners who worked out of Hobart Town. It is still mainly a residential area, with many historic homes and shops, some which are open for inspection as folk museums and art galleries.
Named after a Battery of guns established on the point in 1818 that have long since been removed, it retains much of the character it have over a century ago.

south of Hobart city centre. From Salamanca Place via Kelly's Steps, a set old colonial era stairs, or walk along Davey Street from the city, left into Harrington St, left into Hampden Rd. 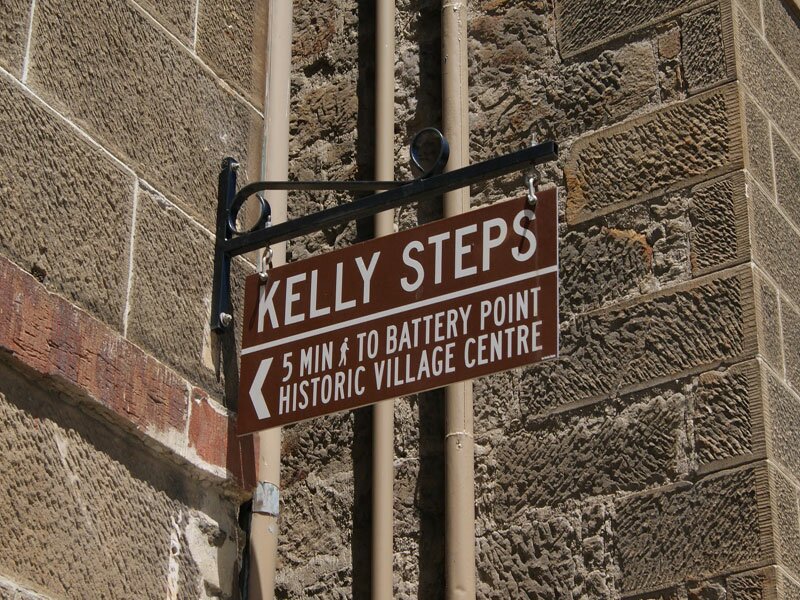 Kelly Steps were built in 1839 by the adventurer James Kelly to connect Salamanca Place with Battery Point. Kelly was a dominant figure in seafaring and port activities during the formative years of Hobart.��

At the heart of Battery Point is Arthurs Circus, a ring of old cottages circling a old village green. It was one of the earliest sub-divisions in Australia, the land having been established by then Governor George Arthur in dubious circumstances in 1829. 18 years later the land was subdivided and the blocks were sold. Auction advertisements described "delectable building sites in a neighbourhood that will inevitably become The Resort of the Beau Monde" for officers of the town and harbour garrison. Most of these quaint privately owned Georgian cottages of Arthur's Circus were built in the 1840s and 1850s, and all have been carefully restored. A visit to Arthur's Circus is truly to step back in time.

The area of Battery Point has a long history. Although the current site was settled in 1804, it was not until 1811 that land grants were given to free settlers. Those grants were used by the first settlers for farming. By 1814 several farms were located in the area. In 1818 a battery of guns, called the Mulgrave Battery, were placed on the southern side of the point as part of the coastal defenses on the deep water port established at Hobart Town.
Although the outpost was originally established as a penal colony and defensive outpost, by the 1820's the area had began to have free settlers arrive or establish themselves on farms around Hobart Town. One of the major infusions of wealth into the colony was that the Royal Navy made Hobart Town an important Pacific base. The Navy shipped timber, flax, and rum from the port.