Adventure Bay, the large bay on the eastern side of the isthmus that joins North and South Bruny Island, could be called the birth place of Van Diemen's Land -Tasmania. It���s list of 17th and 18th century European visitors reads like a who's who of leading Pacific explorers from the golden age of world exploration.

Adventure Bay is on South Bruny just across Narrow Neck.

The bay was first sighted by Abel Tasman in 1642 when exploring for the great south land south of the then known world because of gale force winds, he was unable to make a landing. James Cook, Matthew Flinders, William Bligh and French explorer Nicolas Baudin all made landfalls at Bruny Island's Adventure Bay. The remains from whalers and loggers from 1820-1850 and timber bridges spanning gullies 30 metres deep are also on display and are part of the unique heritage from the pioneer settler period. 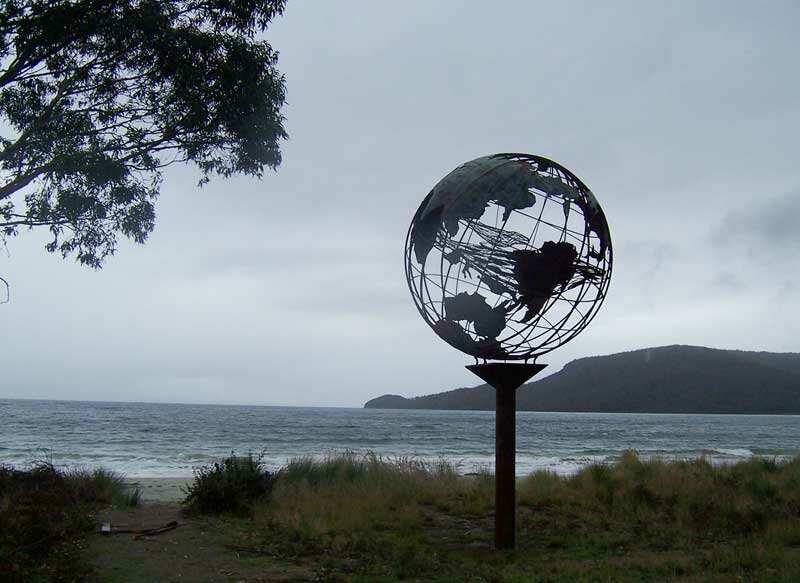 British explorer James Cook in HMS Resolution and Captain Tobias Furneaux in HMS Adventure left England in 1772 to explore the South Seas. Becoming separated, Furneaux followed Tasman's chart and in 1773 found the bay naming it Adventure Bay - replenished his water and wood supplies and sailed on to New Zealand. Cook landed at Adventure Bay in 1777 from HMS Resolution with William Bligh as sailing master.

Captain Bligh revisited Adventure Bay in 1788 with botanist Nelson planted a number of fruit trees on the east side of the bay which he brought from the Cape of Good Hope. When he returned in 1792 he found that one apple tree was still growing, the others having been consumed by fire. It is said this was the Tasmania's first apple tree. Tasmania was later to become known throughout the world as the Apple Isle of Australia. The bay became a centre of the whaling industry with whalers using the Bay as early as 1804. By 1829 the Bay supported some 80 to 90 men, two sloops and up to twenty whale boats. 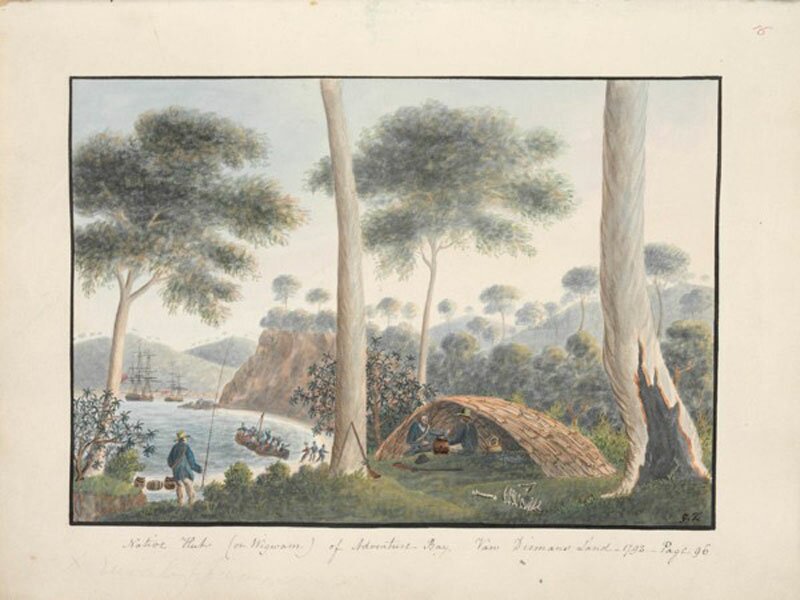 As well as discovering, in 1798, that Tasmania was an island George Bass and Matthew Flinders again visited and explored Bruny Island and the D'Entrecasteaux Channel in December 1798 when they circumnavigated Tasmania in the sloop Norfolk. They first sailed to Preservation Island then across to the north west corner of Tasmania and down the west coast until they reached Fluted Cape on Bruny Island. Norfolk moored in Storm Bay and was then taken up the Derwent River and into the D'Entrecasteaux Channel, with Flinders doing his usual meticulous mapping as they went. Bass and Flinders spent four days in Oyster Cove sheltering from rough weather before heading back to Sydney in January 1799.

In 1801 an expedition to Bruny Island and the D'Entrecasteaux Channel was led by the Frenchman Captain Nicholas Baudin. This expedition, with two well equipped ships and a group of scientists, was the first purely scientific expedition to Tasmania and it focused primarily on the Bruny Island and D’Entrecasteaux Channel region. The French met Tasmania’s Aboriginal peoples and treated them with high respect. 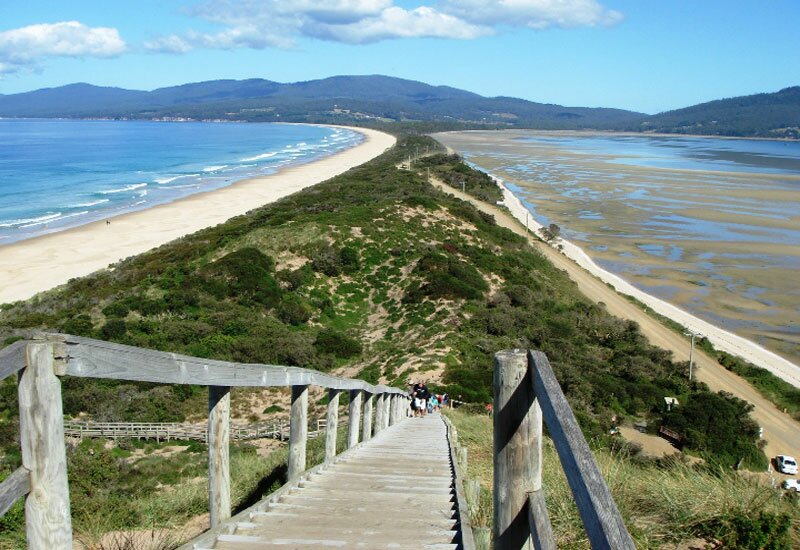 The narrow isthmus joining North and South Bruny is called The Neck. on the east side is Adventure Bay, on the west side is Simpsons Bay, which is part of the larger isthmus Bay. At the top of the hummock on the sandbar is the Truganini Lookout - reached via a timber stepped boardwalk that affords 360 degree panoramic views of the Bruny Island coastline. 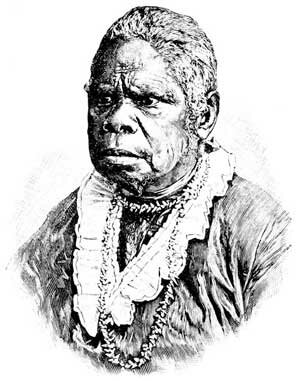 The Narrow Neck lookout honours Tuganini, who is probably the best known Tasmanian Aboriginal women of the colonial era. She was of the Nuenonne group, born on Bruny Island in about 1812, just nine years after British settlement was established further north on the mainland, close to what is now Hobart. By the time she had learned to collect food and make shell necklaces, the colonial presence became not only intrusive but dangerous. She had experienced and witnessed violence, rape and brutalities inflicted on her people.

By the time she was 17 she had lost her mother, sister, uncle and would-be partner to violent incidents involving sailors, sealers, soldiers and wood cutters. At this time, in 1829, the Black War was under way and Truganini was detained at the Missionary Bay station on Bruny Island. Placed in the custody of Augustus Robinson, a government-backed conciliator who set out to capture all independently living Tasmanian Aborigines, she remained for the rest of her life under the supervision of colonial officers. Except for a short interlude, accompanying Robinson in his travels to Port Phillip (now part of Melbourne), she spent 20 years imprisoned, with other Aboriginal Tasmanians, on Flinders Island, and another 17 years in the Oyster Cove camp, south of Hobart.

Details of her biography are sketchy, predominantly drawn from the journals and papers of Robinson, with whom she was associated for ten turbulent years until her long detention on Flinders Island. She was bright, intelligent and energetic, known as one of the few Aboriginal Tasmanians rooted in pre-contact language and culture, who survived beyond the middle of the 19th century.

When the number of detained Aboriginal Tasmanians fell below 20 in 1854, there was growing appreciation that Tasmanians were a unique human group, distinctly different from mainland Australian Aborigines. Soon this interest expanded beyond paintings and photographs. Scientists and entrepreneurs attempted to obtain human bodies for research and exhibitions. From the position of her Aboriginal beliefs and spirituality, Truganini feared that, when she died, her body would be cut into pieces for scientific or pseudo-scientific purposes as it had already happened to another Aboriginal Tasmanian William Lenne in 1869.

She also feared that her remains would be displayed in a museum for public viewing. Truganini pleaded to colonial authorities for a respectful burial. Despite her pleas, she was buried at the former Female Factory at Cascades, a suburb of Hobart. Within two years, her skeleton was exhumed by the Royal Society of Tasmania and later placed on display. On 30th April 1976, seven days short of the centenary of her death, Trugernanner's remains were finally cremated and scattered according to her wishes - in the D'Entrecasteaux Channel, close to her birthplace and homeland.

In 1997 the Royal Albert Memorial Museum, Exeter, England, returned Truganini's necklace and bracelet to Tasmania. In 2002, some of her hair and skin were found in the collection of the Royal College of Surgeons of England and returned to Tasmania for burial.