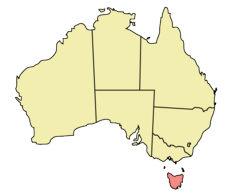 Sitting just 240 kilometres south-east of mainland Australia, Tasmania has long had the nickname Apple Isle due to the large amount of fruit grown there. In Tasmania, you are never far from water and mountains - it has more than 1,000 mountain peaks. More than 40 per cent of the island is protected as national parks and reserves, which are home to some of the rarest animals in the world.

The southern-most and second oldest state capital, Hobart is an historic port situated in a picturesque natural setting beside the deep Derwent River estuary and in the shadow of the mass of Mount Wellington.

Huon Valley: a fruit growing district in Hobart, the valley incorporates busy towns and sleepy villages, serene boutique farms and World Heritage Wilderness areas, all accessed by roads that wind through a world of beautiful valleys and waterways.

Tasman Peninsula: one of the most accessible and stunning stretches of Tasmania coastline, the peninsula is a place of great natural beauty with sheer cliff faces, natural arches and ocean vistas stretching to the horizon towards Antarctica. Australia's largest collection of convict era relics have been preserved at the notorious Port Arthur Penal Settlement.

Tamar Valley: Home to Launceston, Tasmania's second largest city. Tamar Valley is the second most important fruit growing district in the state, with award winning wineries and many orchards that offer door sales of their produce.

Stanley: A quaint town, nestled at the foot of Circular Head, which is the core or volcanic plug of an extinct volcano. The Nut as Circular Head is more popularly known, rises 152 metres above sea level, dominating the coastal plain.

Freycinet Peninsula: Jutting out between The Tasman Sea and Great Oyster Bay on Tasmania's east coast, the Freycinet Peninsula is a rugged and beautiful stretch of land, noted for its white-sand beaches, secluded coves, panoramic vistas, rocky cliffs and excellent bushwalks. The park is famous for Wineglass Bay, just one of its many white sandy beaches.