Tasman Island stands defiantly beyond the tip of Cape Pillar, a rugged, desolate and windswept rock; it was named after Dutch seaman Abel Tasman who cautiously skirted its thunderous shores in 1642. Like a fortress, its grey basalt columns rise 240 metres straight out of the sea. Above is a plateau of only 50 hectares, pock-marked with sink holes, caves and small clumps of windswept vegetation.

Located off the south eastern tip of the Tasman Peninsula, the island stands off-shore from a rugged, awe inspiring corner of Tasmania known as Tasman Peninsula, that features magnificent cliffs and coastal formations such as the Devil's Kitchen, Tasman's Arch, Waterfall Bay, Pirates Bay Lookout, Fortescue Bay, Remarkable Cave and Cape Pillar. The cliffs of Tasman Island and nearby Cape Pillar are in fact the highest sea-cliffs in the southern hemisphere.

Perched atop the island is one of Australia's most inaccessible light stations, being posted there was so unpopular that it was likened to the infamous American island prison Alcatraz. There was a sense of isolation which sent lightkeepers mad. Tasman Island's all-steel lighthouse was built in 1906. The steel panels for the 29 metre light tower - one of the highest in Australia - which are bolted together, the lens and its heavy pedestal were all made in England and shipped to Tasman Island, where they had to be hauled to the top of the rugged 250-metre-high cliff. Access to the remote and stormy lighthouse was always difficult. Seas were too rough for supply ships to approach closely, and stores and people were taken from a landing stage and winched up the cliffs via a tramway and flying fox.

The station suffered severely from storms with on one occasion, in 1919, seeing verandahs and fences being blown away, water tanks blown off their stands, and the shifting of out buildings off their foundations. The winds were so strong that the vibrations in the lantern room destroyed five mantles and two pounds of mercury jumped out of the race and had to be replaced. Right up until the 1950s, the winch was still being operated by a horse. By then, three families lived on the island, with food supplies arriving by mailboat once a fortnight - if weather allowed. The light is still operational today but the settlement has long been abandoned.

One of Australia's most inaccessible light stations, Tasman Island had a sense of isolation which sent men mad. These days, gone are the gardens of vegetables and flowers planted by the lighthouse keepers which thrived in the island's fertile soil. Gone are the sheep and cattle which sustained their families who lived on the island. The three brick light keepers' houses are still standing, but are in an advanced state of decay. The effects of the weather and vandalism have taken their toll.

Few places on Earth have such a rich variety of marine wildlife and seabirds as Tasman Island. The Continental Shelf runs close to the island and an upwelling of nutrients from the ocean's depths creates a smorgasbord for all the creatures in the complex food chain of the sea, from plankton to great white sharks. Often seen in and around the waters surrounding the island are Southern Right Whales, Humpback Whales, Killer Whales, Minkie Whales, Pilot Whales, Common and Bottlenose Dolphins, Australian and New Zealand Fur Seals, Wandering/Shy/Buller's/Yellow Nosed and Grey Headed Albatross, Giant Petrels, Prions, Shearwaters, Fairy Penguins, Australasian Gannets, Gulls, Sea Eagles, Falcons, Tuna, Mako Sharks, Sunfish and much more. 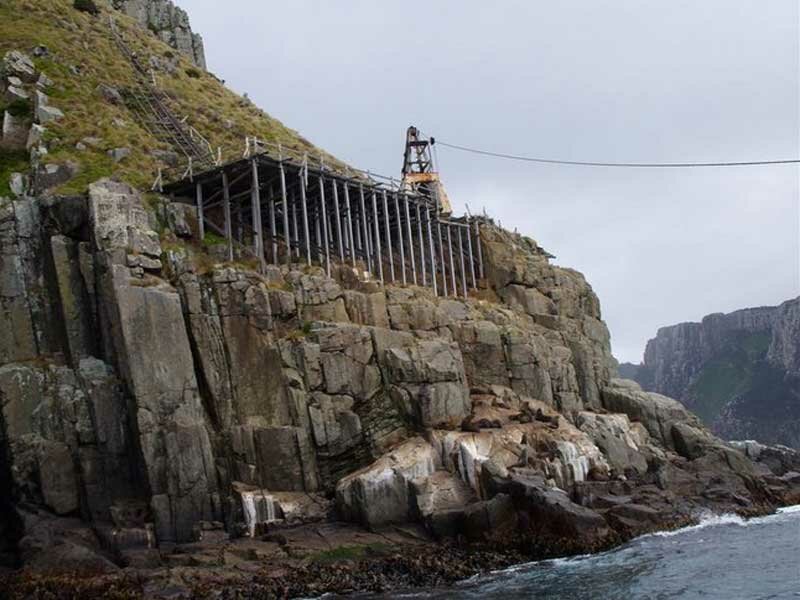