A mining town at the northern end of the West Coast Range, Rosebery sits in the shadow of Mount Black and adjacent to the Pieman River, now Lake Pieman.

Constructed to move ore from the Hercules mine to Rosebery the elaborate Hercules to Rosebery Aerial Ore Bucket Ropeway continued to operate until 1986. Since then it has collapsed. The remnants of this highly unusual method of ore transporation can be south of the town.

Pasminco Zinc Mine is central to the economic success of the town. Pasminco do not have tours of the mine. However Hays Bus Service in Rosebery do have surface tours which help the traveller to understand the workings of the mine. 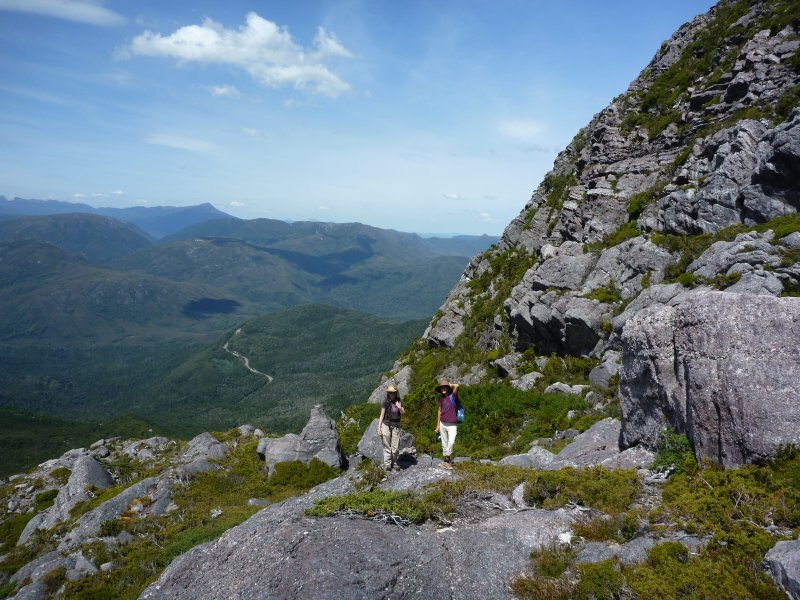 The climb to the summit (1275 metres) is a difficult walk. The mountain is commonly covered in snow in winter time and, like all mountains in the area, is prone to dramatic and very rapid seasonal changes. Mount Murchisonis the tallest mountain in Tasmania’s West Coast Range. As with most of the mountains in the West Coast Range, the taller ones were named after opponents or critics of Charles Darwin, the smaller after his supporters.

There is a track but it is not over obvious in parts, but is no problem to follow. It  commences from a few metres south of a track sign on Anthony Rd. near pole D15 and follows up the ridgethrough forest, including tall tea trees and then emerges into the open with head high bushes gradually diminishing in size to waist level before turning north westerly and ascends cross slope. It involves several scrambles up rocks. Eventually steepness lessens before a clamber over a small rocky crest to reveal the central bowl of Mt Murchison and the final short climb on the sloping rock face to the summit. Allow 4 to 5 hours return. 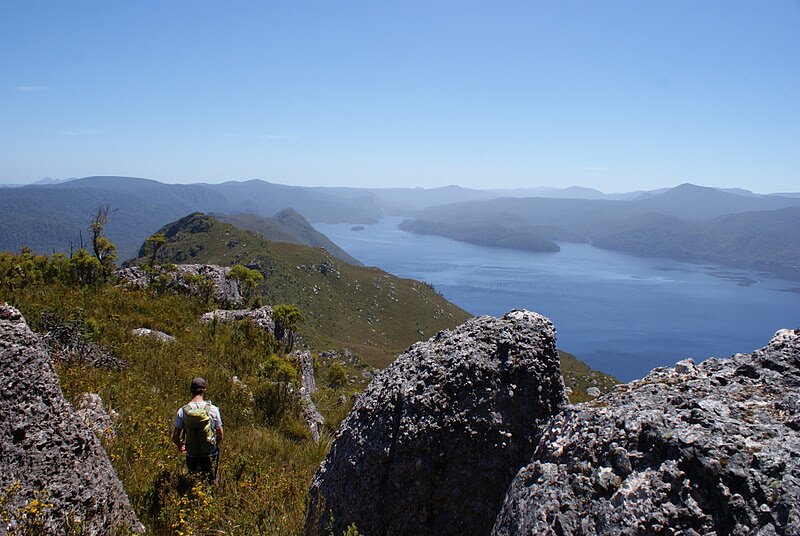 The walk to the top of Mount Farrell (712 m) is relatively short (4 km) but in that short distance the track rises 500 metres, so it is for experienced walkers. Enjoy beautiful views over Lake Rosebery and Tullah town, Lake Mackintosh, Lake Herbert and the surrounding ranges including views to Cradle Mt and Barn Bluff from the summit. 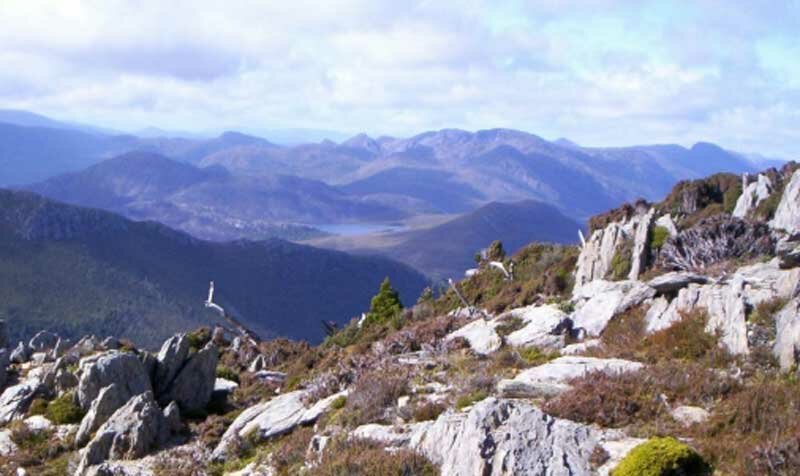 Mount Read (1588 m) offers superb views of the entire area. A walking track up the mountain starts from a Telecom road which is about 1km south of Rosebery. Despite extensive historic mining and human activity on its slopes, Mount Read has unique and significant stands of Huon Pine forests on its slopes. To the south east of Mount Read are many features of glaciation [3] in what are known as The Tyndalls - as well as glacial lakes - Lake Westwood, Lake Selina, and Lake Julia.
As colourful a history as that of Mount Lyell, Mount Read has had mines, settlements and other activities on its slopes for over a hundred years. The main copper and gold ore bearing deposits in the West Coast Range are known as occurring in the 'Mount Read Volcanics' relating to the complex geology of the area. The Hercules Mine on Mount Read was connected by a 2 foot haulage incline to Williamsford and then to the North East Dundas Tramway. The haulage was self-acting and one mile (1.6 km) long and 550 metres high with a maximum gradient of 1 in 5.
Mt Read is the site of the world's oldest clonal tree within a 10,500-year-old stand of Huon Pine. The oldest individual tree or stem on the site is believed to be 1000 to 2000 years old, though the organism itself has been living there continuously for 10,500 years. 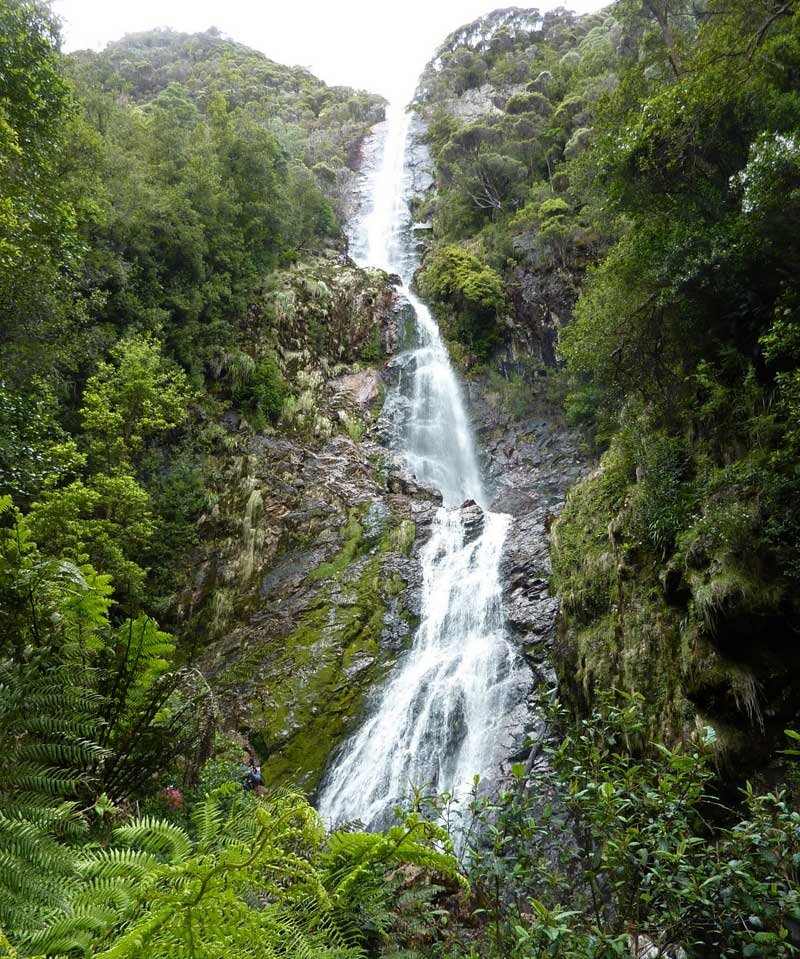 At 105 metres, Montezuma Falls is Tasmania’s highest falls. To access the falls, follow the Montezuma Falls Trail traversing lush rainforest with leatherwood, myrtle and sassafras. This trail follows the former North East Dundas Tramway which ran from Zeehan to Williamsford, once a busy mining town but now slowly being reclaimed by the bush. 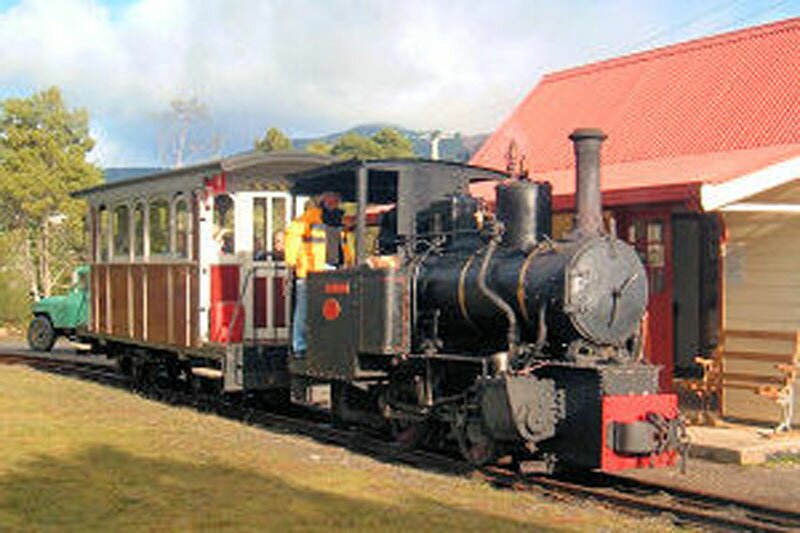 Tullah began life as a mining town named Mount Farrell, established in year 1900 after silver lead ore was discovered in the area. It was later extended as a hydroelectric power scheme construction town during the making of the Pieman Scheme in the 1970s. It is now mainly a fishing community at the edge of Lake Rosebery. Prior to adequate roads being built in the area, it was serviced by the Wee Georgie Wood Railway (now a tourist railway) under its earlier name of the North Farrell Tramway.